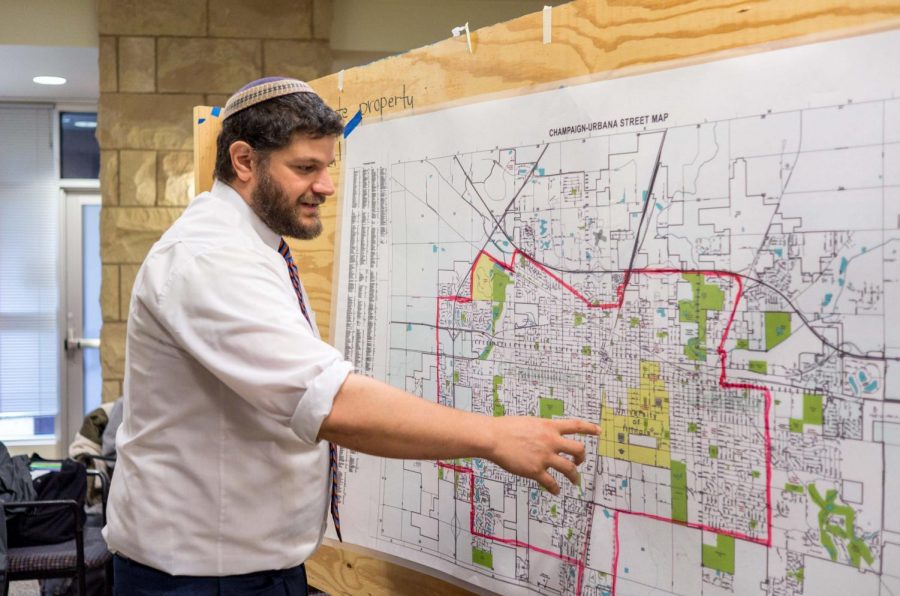 Shlomo Schachter, OU-JLIC Rabbi at Illin Hillel, explaining the Eruv being created in the Champaign-Urbana area.

Up until late summer of this year, Jewish individuals in the area in observance of Shabbat were not able to carry items outside their homes.

Shabbat, otherwise known as the Sabbath, is a day of religious observance in Judaism that prohibits work of any kind, such as carrying objects in the public domain.

Rabbi Shlomo Schachter, who is established at Illini Hillel, gave clarification on exactly what the Sabbath is and why it greatly affects the lives of Jewish individuals.

Schachter said the Sabbath is a reenactment of God’s rest on the Seventh Day. As written in the book of Exodus, it is a day when Jews abstain from created work.

“Now, the categories of created work from which we abstain are derived from the construction of the tabernacle in the desert,” Schachter said. “God says for 6 days you shall do your work, and on the 7th day you shall rest.”

Observance of the Sabbath is a symbolic gesture in which Jews live as if the world were already perfected in God’s image after His creation of the world in those six days. So from sundown on Friday evenings to sundown on Saturday evenings, observant Jews are not permitted to carry in the private space, public space and vice versa.

“We abstain from any kind of creative work, both physically, and also psycho-emotionally, so to try and live in the world as if it were already perfected,” Schachter said.

An Eruv is a visual boundary that encloses a space. Its establishment in late August allows Jews to carry items outside their homes on the Sabbath. The Eruv in C-U is the only one in Illinois outside of the Chicago area.

Schachter said the Eruv is a door frame that allows Jews to enter a private space from a public one.

“There are certain laws about what constitutes an appropriate fence, mostly what we use today is what’s called a door frame,” Schachter said. “And the door frame is not actually a physical door frame as much as it is a conceptual door frame, which is composed of two uprights and an overhead wire, or overhead of some sort.”

Rabbi Dovid Tiechtel is established at The Chabad Center for Jewish Life, a communal establishment that provides a warm and educational space for Jewish individuals on campus.

Tiechtel said the Eruv is a big deal because it has dramatically changed the lives of Jewish individuals in the area.

“There’re people on Jewish Sabbath that were not able to carry all these years, and now they can carry,” Tiechtel said. “It’s a very big deal because it attracts more Jewish students to this campus and gives people more opportunities.”

Hannah Bader, junior in Business, is the vice president of ritual life at the Illini Hillel. She plans holiday events and educates people on Jewish traditions and holidays.

Bader said the Eruv has remarkably changed Jewish people’s lives for the better. She said that before the Eruv existed, Jewish students going out on Friday evenings had to hide their house keys outside their homes because they couldn’t carry them into the public space.

Bader also said Jewish students are now able to participate in events at the Union on the Sabbath because of the the Eruv. Before it, they weren’t allowed to carry their IDs and couldn’t get in.

There is a flourishing Jewish community in the C-U area, and especially with the creation of the Eruv on campus, it is bound to keep growing.

From the various centers on campus to the remarkable members of the Jewish institutions and clubs, Bader encouraged any Jewish individuals to explore the Jewish community on campus.

“We definitely have a ton of resources,” Bader said. “We have a lot of great staff members here. We have a total of four Rabbis on campus, we have three different organizations, we have Hillel, JET and Chabad. All three of those, we work together a lot to make sure that everybody is inclusive, everyone does feel welcome, everyone is supportive.”