One hour to breakout at Brainstorm Escapes in Champaign 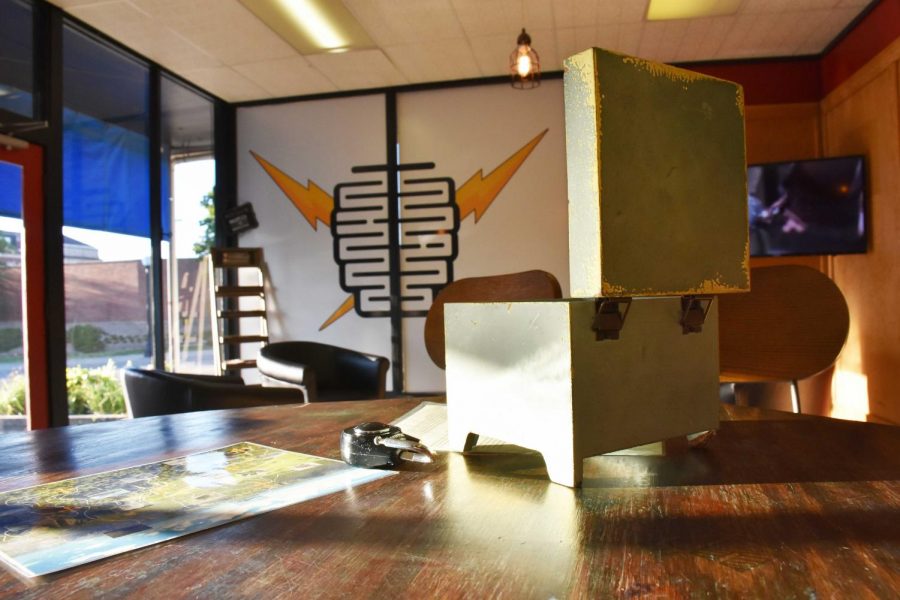 This business earns money by blindfolding its patrons, handcuffing them together, locking them in a room and challenging them to escape with only 60 minutes on the clock.

Brainstorm Escapes, located at 61 E. University Ave., is an escape room that strives to provide a unique and immersive escape-room experience.

Escape rooms engage participants with puzzles and challenges, requiring them to think, poke and prod around the room until they have “escaped.” The experience often encourages a whole team to work together in order to escape. This is especially the case in “Rise of the Zombie Pets,” where one half of the group is separated from the other.

A session at Brainstorm Escapes costs $25 for an adult and $20 for a student.

Steven Cao, a University alumnus, went to Brainstorm Escapes this past summer with a large group of friends.

Cao and his friends made it through the “Rise of the Zombie Pets” escape room.

Abandoned after an apocalyptic zombie outbreak, this veterinary clinic is far from ordinary, and patrons are far from safe. The escapees are infected and must create an antidote before the virus takes full effect.

In comparison to other forms of entertainment, Cao said his escape room experience was engaging. He said you have to actively think and figure out puzzles.

“(It’s) unlike when you’re (at) a movie, and you’re just sitting there passively watching, or if you’re in an amusement park, you’re just kind of riding the ride, you’re not really interacting with anything,” Cao said. “It’s also better for getting to bond with people when compared to a movie or something.”

Benjamin Cheng, a University alumnus, also went to the escape room with Cao.

“The riddles were actually decently difficult, to the point where almost everyone had to be working together to find clues to solve the puzzles,” Cheng said. “It took us down to literally the last minute to solve the puzzle and escape the room.”

The third member of Cao’s group is Ren-Jay Wang, a University alumnus. Wang said he was impressed with how elaborate “Rise of the Zombie Pets” was.

“The initial cell was sufficiently creepy,” Wang said. “The most memorable part was getting handcuffed.”

Cassandra Hustedt, store manager and creative director at Brainstorm Escapes, has been with the business since before its opening back in Dec. 2015.

Hustedt partnered with University High School last spring and worked with their librarian to create a remote escape room at the school’s library.

Hustedt said the creative process starts with an idea. She said you have to make sure every part flows and fits in the world.

Hustedt also said they have talked about doing some remote escapes at the University. She said in the future, Brainstorm Escapes would absolutely be willing to partner with student organizations on campus.

“Looking at the escape room industry in general, it’s kind of changing and evolving as it’s becoming more and more popular,” Hustedt said. “We’re just kind of trying to take a new look at escape rooms and what can we do differently.”

Gloria Zhang, a University alumnus, saw Brainstorm Escapes on Facebook and decided to go with her friends. Zhang and her group completed the escape room “Defusing the Oval Office,” around the time Brainstorm Escapes first opened.

“Defusing the Oval Office” puts participants into a life or death “National Crisis”: there is a bomb planted in the Oval Office, with only one hour to defuse it and escape.

“We were all working super hard to find clues, and when someone found a clue everyone was genuinely excited,” Zhang said.

Zhang’s team, like Cao’s, really cut it close on time. She said they escaped with less than two minutes to spare. She appreciated the way Brainstorm Escapes sets up and monitors their patrons. Zhang said they provided customized hints without ruining the fun.

Hustedt said Brainstorm Escapes is always looking to improve the escape room experience by adding new technology and making the world feel bigger than the room.

“Everybody loves games, they love video games or board games, or one thing or another — but they also love television, they love theatre, they like being immersed in another world — and (escape rooms) are a combination of the two,” Hustedt said. “So you get to play the game and feel like you’re in a different world. Whether it’s in the Oval Office or a prison or otherwise.”