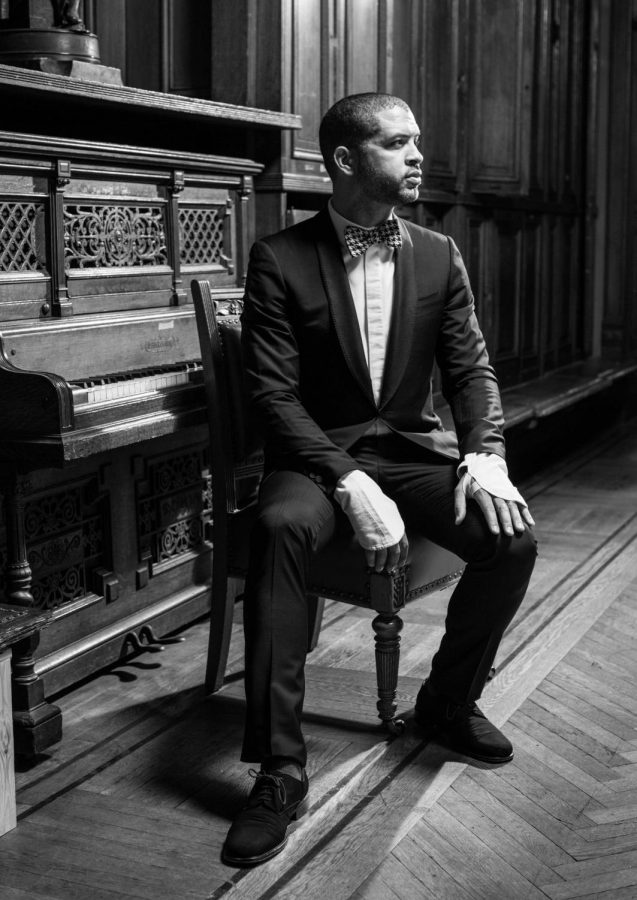 Photo Courtesy of Krannert Center for the Performing Arts

As the disciplined pianist tinkered away at the gleaming keys before him, his audience could sense the airy
melody floating across the stage as it endlessly skipped back and forth between the leader’s fellow bandmates.

With a wave of cymbal taps and crashes, every note swelled with the band’s careful judgment, and every movement sank into the foreground as though the musicians were one.

Jason Moran, the man at the piano, knew his craft so expansively that witnessing it Tuesday night at the Krannert Center for the Performing Arts was almost like interpreting a second language for those lucky enough to witness his decade-old multimedia program, “In My Mind: Monk at Town Hall, 1959.”

As the music temporarily faded into a silent interlude, a screen flickered from the back of the stage. In a series of text, a video shared a brief yet intimate memory of Moran’s childhood — when he was about 13 years old, the soon-to-be jazz visionary stumbled upon the striking “‘Round Midnight,” one of several of Thelonious Monk’s valuable contributions to the musical canon.

Largely considered to be one of the founders of today’s jazz, Monk’s spirit sat atop the highest throne during Tuesday’s iteration of “In My Mind.”

The setlist, a highly improvised expansion upon Monk’s timeless classics, carries a particularly special aura in 2017, the year in which Monk would’ve turned 100 years old.

Gabriel Solis, professor of musicology, African-American studies and anthropology at the University, worked with the Krannert Center to identify Moran as the ideal candidate to help celebrate Monk’s timeless accomplishments.

Solis has published two books on the musician: “Monk’s Music: Thelonious Monk and Jazz History in the Making” and “Thelonious Monk Quartet with John Coltrane at Carnegie Hall.”

“Monk was a part of the revolution of jazz that happened in the ‘40s … creating a new sound which is really what we think of as jazz today,” Solis said.

Many of Monk’s compositions, including the familiar “‘Round Midnight” and “Straight, No Chaser,” have since been cemented into universally recognized standards.

“He was one of the few people who was moving jazz from this big-band swing music to a highly improvisational, dissonant and rhythmically surprising language,” Solis said.

Yet Bridget Lee-Calfas, advertising and publicity director for the Krannert Center, emphasized that “In My Mind” is not simply a nod toward imitable nostalgia.

“I think (Moran’s ‘In My Mind’ performance) is a tribute in the sense that it’s celebrating a legacy,” Lee-Calfas said, “but it certainly isn’t an impersonation either.”

Indeed, the program is less a sign of devotion than a love story, storing emotions that aren’t obligatory, but vibrant and euphoric.

Moran, the sole live musician featured for the first song, adjusted a pair of headphones before diving into a timid yet playful dialogue with an archived recording of Thelonious Monk. As his solidarity rung through chords, it was almost as if Moran had reverted back to his youth, fantasizing about a chance to grace the stage with his lifelong role model.

These moments, both introspective and illuminating, brought a fascinatingly touching tone to the event, one that the Big Bandwagon would maintain throughout.

With Wallace Roney on trumpet, Frank Lacy on trombone and Bob Stewart on tuba, the brass section supported its glossy harmonies with durable force.

Nevertheless, in a show of many highlights, drummer Nasheet Waits still managed to shine. His experimental fills and patterns lifted the Big Bandwagon’s drive to the same challenging standard that Monk held himself to. As the recovered audio of Monk’s low, crisp vocals was intermittently integrated into the live music, his ever-present philosophy further influenced Waits’s performance.

“We don’t want it to sound like no big band,” Monk’s voice came through the loudspeakers.

The statement, aimed to distance his work from the predictable norms of popular music at the time, was originally directed toward his band during a recording session.

If the Big Bandwagon felt they hadn’t championed this ideal sufficiently by the conclusion of their hour-and-a-half-long performance, they resolved this by marching their instruments down the aisles, amid rave applause, and continuing up to the lobby for an impromptu encore.

The spectacle would have made Monk proud.

“I think that, for musicians like Moran, there’s a sense that Monk laid down a path so that they may walk over it more easily because of his struggles,” Solis said. “I think even today, (Monk) seems really cutting-edge and speaks to the new. Just that sense of personal integrity really resonates.”