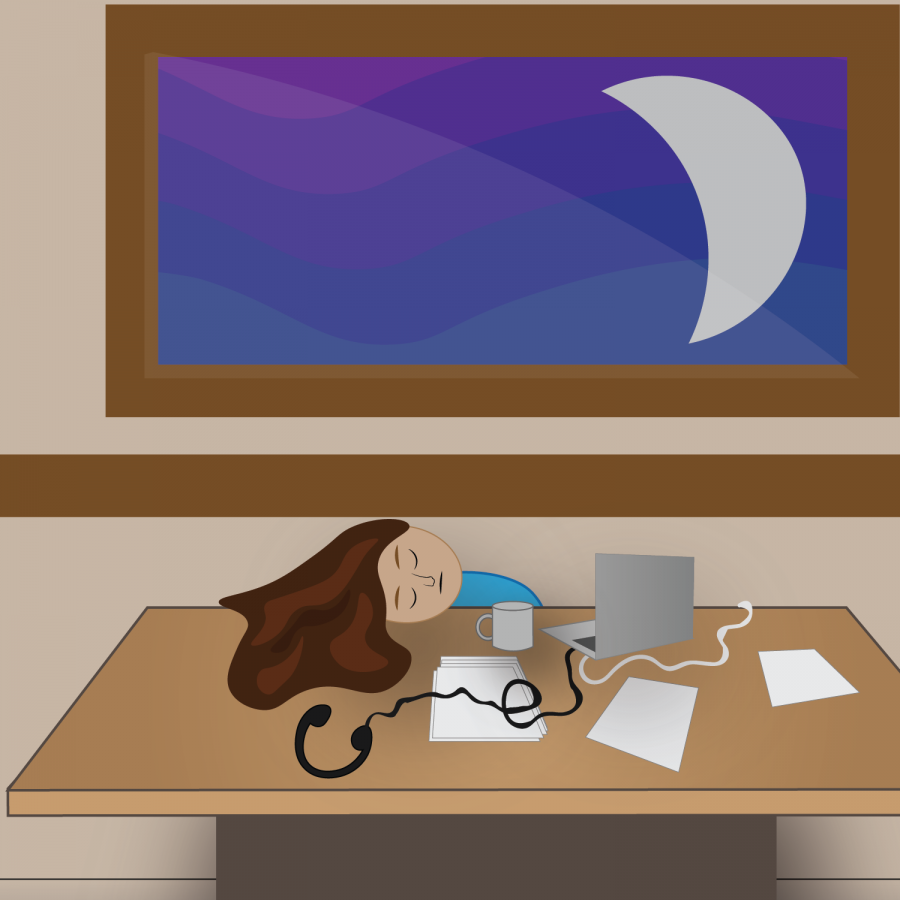 At least once in students’ college careers, they debate getting a good night of sleep before an exam or forfeiting their rest for a few extra hours of studying. It’s the dreaded “all-nighter.”

While most students may feel most accomplished trying to cram as much material into their brains as possible, research shows that this is not as effective as they might believe.

Martha Gillette, professor of neurobiology at the University, has studied how the circadian rhythm in humans works. This system that regulates sleep, which works by setting an intrinsic body clock within each person, can be thrown off when someone doesn’t get enough sleep.

The other sleep system, homeostasis, refers to the body’s ability to maintain internal systems in the same state.

“When we only get a little bit of sleep, we are pushing against the homeostasis,” Gillette said. “Studies were done on college students where they kept track of when they woke up and went to sleep, and they found that over a period of about four weeks, even though they might stay up late some nights, it tends to even out on the weekends because of homeostasis.”

YoungAh Park, assistant professor in the School of Labor and Employment Relations, said based on ample literature on homeostasis, catching up on sleep doesn’t always work effectively.

Park said students who are deprived of sleep oftentimes think they can just “catch up” on the weekends.

“It doesn’t really help your deprived sleep status because it breaks your rhythm in your biology and physiology, so having regular sleep hours is very important,” Park said.

Bharati Prasad,  associate professor at the University of Illinois at Chicago, specializes in sleep disorders in the Department of Medicine.

She said students may experience overnight effects of sleep deprivation, such as issues in intellectual functioning, data computation and performance of technical tasks.

Prasad also explained that based on research done over a 10-year period, more serious effects, such as having an increased risk for abnormal metabolism, weight gain or elevated blood pressures can also occur.

“It is not only about tomorrow’s test,” Prasad said. “It’s also about being in it for the long haul to have consistent excellent performance.”

Gillette explained while seven to eight hours of sleep a night is ideal, our sleep cycles can easily be interrupted by technology.

The Harvard Medical School researched the effects of blue light from the images from a cellphone or other electronic screens. Gillette said the best option for students to get a restful night sleep is to refrain from using electronics at night or to use a special dimming setting.

“There are specific photoreceptors that go into the part of your brain that controls the day part of your brain,” Gillette said. “If they see blue at night, that is a signal that for a shift in external source of light. That has a direct physiological effect on timekeeping, so it’ll be harder to go to sleep and harder to get up.”

Getting enough sleep has also been consistently found to maximize one’s memorization abilities.

Prasad said performance “degrades very rapidly” with lack of sleep and is often seen as an overnight effect.

“There are immediate effects of the brain resting,” Prasad said. “There are experiments that show that when you read something and sleep afterward and read it in the morning you remember it better. There is a foundation of memory and learning just from going to sleep.”

“You have all these experiences in the daytime, and then you go to sleep and your brain encodes the strongest features of what you learned, and that’s how your memory is sustained,” Gillette said.

For this reason, cramming tends to not work.

“Psychology shows that your memory can improve while you’re sleeping,” Park said. “So even though you cram everything into your brain for a short amount of time, if you don’t sleep well that night, your memory won’t function well that day.”

Although it’s not always easy to balance school with everything else, our bodies will want to thank us.

“We do know that alertness is better when you’re getting sufficient sleep,” Prasad said. “The bottom line is you can’t compensate for insufficient sleep. Without sleep, your body functions at a lower level.”