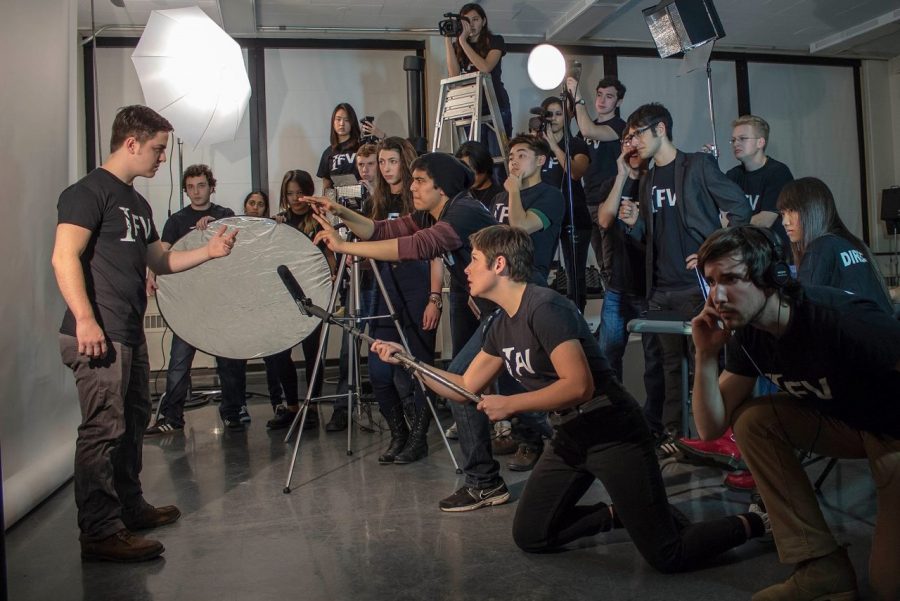 Illinois Film and Video recreates a professional set for a photo.

Eric Mo believes that everyone loves movies. They just don’t know it yet.

“If people say they hate movies I just don’t think they’ve seen the right ones. There’s so many genres that there has to be a perfect movie for you,” Mo said.

Mo is the president of Illinois Film and Video and a senior in Media.

With about 400 members in the club’s Facebook group, IFV has attracted students from many different areas of study who enjoy the filmmaking process and working in a collaborative setting.

“When I first became president, I really wanted to grow the film scene at the University and make IFV the film club of the campus,” Mo said.

In recent years, the club has shifted focus and developed short films that allow members to experience every part of the production process.

Mo is dedicated to making IFV the film hub of the University.

He hopes that through developing some  more extensive films, the club can earn a consistent reputation on campus.

“When I first became president, I really wanted to grow the film scene at the University and make IFV the film club of the campus,” Mo said.

IFV hopes to expand its reputation by screening its short films around campus and working on smaller advertising and promotional projects as well. Currently, the club is working on two short films titled “Lifesaver” and “Death of a Bachelor.”

“Lifesaver” tells the story of a girl who has powers to save people through her dreams. Every night, she dreams she saves another person and realizes her special powers as the film progresses.

Dushan Ranasinghe, senior in LAS, wrote the script and is directing the film.

He came up with the idea for “Lifesaver” before he came to study at the University from Australia.

“As director, it’s about making sure everyone understands my vision but also being open to other ideas. I’ve also learned not to be sentimental over any one part because the film is bigger than any one person,” Ranasinghe said.

Alexandria Willis, senior in LAS and executive producer of both “Lifesaver” and “Death of a Bachelor,” said she has learned many soft skills, such as management and communication skills that will apply to future jobs.

“Death of a Bachelor,” the other short film the group is working on, follows a professional imposter by the name of Guy throughout his latest scheme. However, Guy is faced with some difficult decisions when he meets an attractive woman at a bar the night before his latest scheme is to play out.

Writer and director of “Death of a Bachelor,” Zhi Luo, senior in Media, oversees the vision of the film throughout the production process. Her work on the film has taught her a lot of skills essential to work in the filmmaking industry.

“My biggest takeaway from this project is that being well organized and being able to ask for help confidently are essential if you want to get involved in filmmaking,” Luo said. “My favorite part is actually working with passionate and devoted people.”

“Death of a Bachelor” is in the post-production stages of the filmmaking process and should be completed within the next couple of months.

Apart from the technical side of filmmaking, IFV members have also been able to bond and develop a final product that represents all of their ideas and hard work.

“I’m quite an inverted person, but filming forces me to work with people. I always like working on the shoots with people because I get to work as a crew and be a part of a puzzle that is bigger than myself,” Mo said.

For IFV members, the most rewarding feeling is knowing that they created a film from a single idea and had fun along the way.

“The simple fact is that it’s fun. There’s something very satisfying starting with nothing and watching a final product that you’ve created together. The things that I’ve learned the most are not film related — they’re communication and leadership skills,” Ranasinghe said.

Many club members say film has always been something that interested them.

“Film and TV has always been the thing that allowed me to connect with people. It also allows me to be a part of portraying someone’s story,” Willis said.

Ultimately, IFV believes films have the power to change the perspectives of people and evoke emotions in us to teach us about the world and about ourselves.

“I think films really helped me empathize with people and understand where they’re coming from,” Mo said. “There’s some amazing stories out there that are groundbreaking and teach us so much about ourselves.”