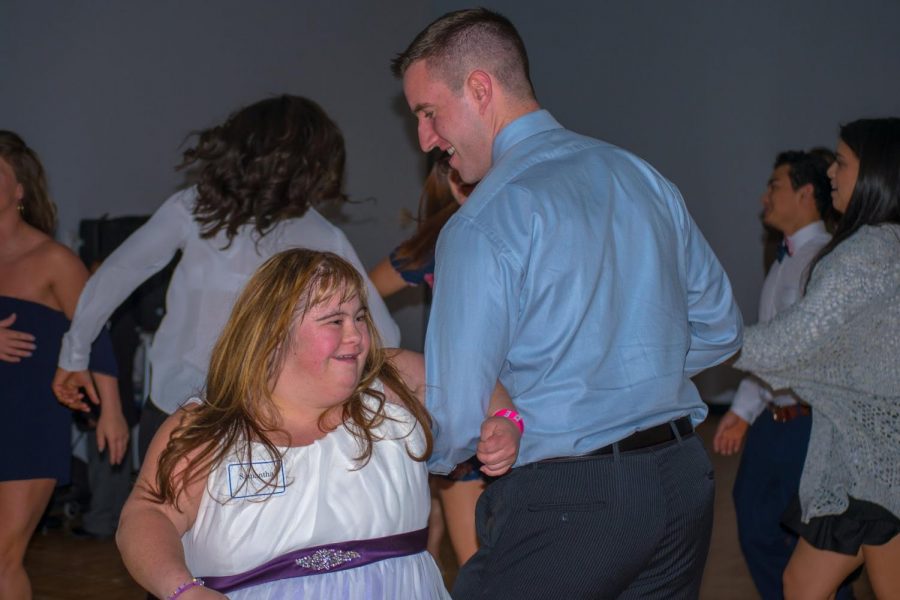 Attendees dance at the Athletic department’s 2017 Winter Ball. The Winter Ball is held to support the Tom Jones Challenger League.

Woods, a boy with Down syndrome, plays for the Tom Jones Challenger League, a baseball league for kids with disabilities. However this weekend people could see Woods busting a move on the dance floor instead.

Saturday night, the University of Illinois Athletics hosted the 2017 Winter Ball for Tom Jones Challenger League at the ARC.

Tom Jones Challenger League has been around for more than 60 years. The league goes toward helping kids with disabilities to develop social skills and also gives them the chance to play baseball in a fun and safe atmosphere.

They take in kids from ages six to 21, and of all different types of disabilities. Players can either play from a tee or coach-pitched ball.

The event had a DJ for dancing, food and cookie decorating, as well as a photo booth. The dance floor was by far the most popular part of the event.

Jill Nicklas, senior in Education, and Ryan Tucker, senior in Business and LAS, planned the event. Nicklas is a softball player and Tucker is a football player for the University.

They said they decided to have the event so they could have a difference in Challenger League players’ lives.

“All these kids come out and they’re our biggest fans,” Nicklas said. “Why not just have another thing for them to show them the respect that they show us? We’re their biggest fans too.”

Kids from the Challenger League often come to Illini games. Nicklas said this past summer they had a combined softball game with the league. There are also several other events that the league has in order to be a part of with Illinois athletics.

Because of their connection with the league, the athletes have become friends and role models for them. Tucker said being a role model for these kids is very “humbling.”

“We kind of see like ‘wow, we worry about softball and football so much and really it’s not that big of a deal,’” Tucker said. “Like there’s more to life than just our sports.”

Nicklas said it’s a great experience to have these kids as Illini fans.

“You are so serious in a game,” Nicklas said, “and you can just look up to one of them and it completely changes your mood. Like ‘you know what, I got this.’”

Jake Cerny, sophomore in Business and University football player, participated in the event and has also done community service at other events similar to the winter ball.

He said the ball was a great event because it brings the community together.

“Everybody loves to play sports,” Cerny said. “I mean, it’s something that can really bring everybody together.”

Maria Woods is the senior associate director of athletics at the University and Wood’s mother. Because Maria works for the athletic department, Alexander frequently goes to Illinois sporting events and has developed a great connection with many of the athletes.

“I think he just likes watching the competitiveness of it,” Maria said. “He really gets into it. And the funny thing is, he always picks the team he thinks is going to win by just how he sees them. Even if it’s not Illinois, he’ll cheer for the other team because he wants to win.”

Bill Hand is one of the board members of the league. He is also a coach and the father of one of the players.

Hand got involved in the in the league because of his love for baseball and his daughter, Tiffany, who has Down syndrome and plays for the league.

“It was a natural fit,” Hand said. “I love baseball and this is big for kids with disabilities, so we got her involved and I just fell in love with the program.”

He said coaching these kids is an incredible and fun experience.

“These kids are just so much fun to work with,” Hand said. “It’s not like any other sport you ever see out there. You coach for the smiles and the hugs, and these kids love to smile, and they love to hug.”

Hand said that what he wants people to know about the league is that they will take in anyone, no matter the disability.

“One of the things we hear quite often is, ‘well my kid, there’s no way he could play,’” Hand said. “We’ll make it work.”