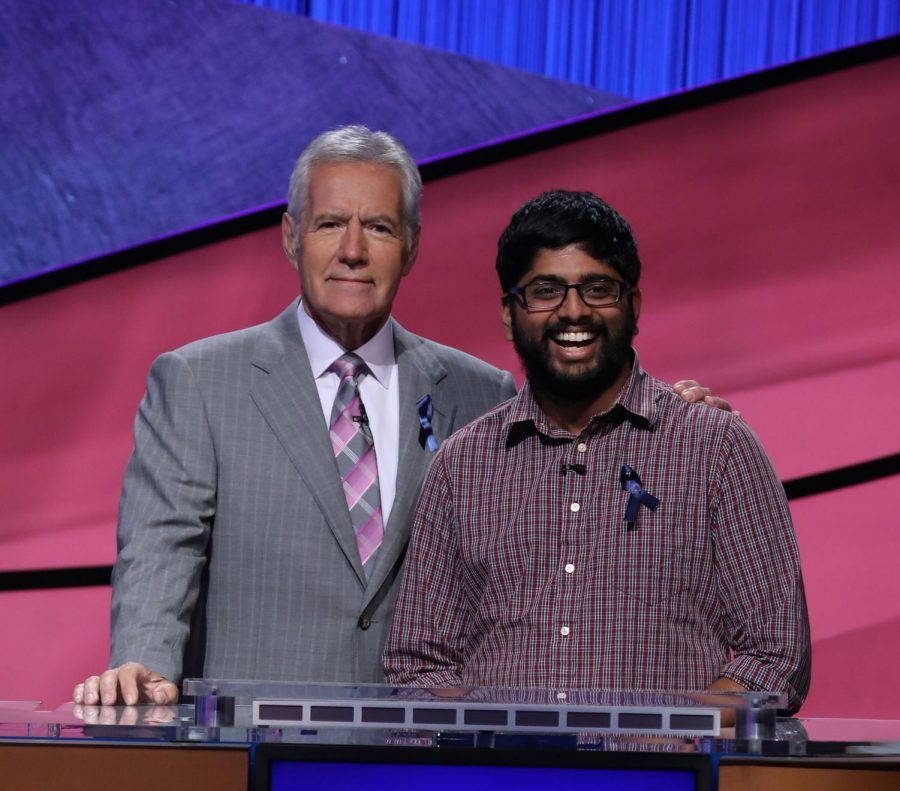 Pranjal Vachaspati, graduate student in Engineering, poses with Alex Trebek, gameshow host for "Jeopardy!" Vachaspati is a five-time champion on the gameshow.

Pranjal Vachaspati naturally squared his shoulders and gazed at the camera before him with a modest, welcoming smile, just as his two fellow contestants standing to his side had done a moment before. His relaxed appearance was enough to reveal that he’d been on national television before, though this was certainly not to be his last moment in the spotlight.

During the summer of 2016, Vachaspati, graduate student in Engineering, made the audience’s jaws drop as a contestant on “Jeopardy!,” the iconic televised game show hosted by Alex Trebek.

While he would soon become a multi-time champion in the trivia contest, his comfort wasn’t necessarily a display of his confidence. For him, it was just a matter of getting swept up in the experience.

“There’s just so much going on that it’s easy to forget you’re on TV,” Vachaspati said. “I think some people do remember and then kind of freak out, but I totally just forgot.”

Indeed, he needed all the brainpower he could muster during his six-game winning streak, including his critical fifth episode, which found him barreling through questions covering everything from Coldplay songs to stop-motion animation movies.

In fact, his impressive performance not only kicked his cumulative prize amount to upward of $120,000 — a figure which rose to over $137,000 by the end of his run — it earned him a spot in the program’s annual Tournament of Champions, held early in November of this year.

Judging from his near-encyclopedic knowledge, along with a physics degree from the Massachusetts Institute of Technology, one might expect Vachaspati to be an intellectual recluse, lost in his own thoughts. In actuality, he gears up for a trivia competition no differently than how people may spend their free time between classes: browsing through Wikipedia pages and catching up on documentaries.

However, Vachaspati’s Ph.D. adviser, Tandy Warnow, believes there’s a difference between keeping your eye out and training it.

What separates Vachaspati from most people is that he’s able to remember all of the information he picks up.

“It kind of sticks, I guess,” Vachaspati said.

It clearly stuck enough to land him at the contestant’s podium, though the opportunity didn’t come easily.

Before his first go-around with “Jeopardy!,” Vachaspati trekked down a long road of applications, which began with an online test composed of 50 questions. After receiving a sufficient score, he was invited for an in-person interview, followed by yet another exam and even a mock episode.

As if he needed additional work to keep himself busy, Vachaspati put his computer savviness to work and engineered a program to automatically read him questions and simulate the timed buzzer system that “Jeopardy!” is famous for.

The effort paid off in the end, as he not only managed to stay afloat during his first episode, which aired in July 2016, but was invited to return five more times to the show, garnering a win for each appearance. He’s grown so familiar with the game that he’s pointed out some trends among the questions he hears.

“Some stuff will show up more frequently than others,” Vachaspati said. “Like, Shakespeare comes up a lot, U.S. presidents … your seventh grade history class comes up a lot.”

Whenever possible, he’ll try to pick questions that swing closer to his college major — particularly if it’s a science category.

It was a simple strategy that launched him to the 2017 “Jeopardy!” Tournament of Champions, an annual event that pools the most successful game participants of recent seasons into a series of all-star match-ups.

The quarter-finals of the competition saw Vachaspati pitted against the intimidating Buzzy Cohen, who would go on to blaze through semifinals and dominate the entire tournament.

Vachaspati kept on his heels until the final Jeopardy, where Cohen pulled away at the last second.

“I thought I had him,” Vachaspati said in an interview with “Jeopardy!.” “But you know, then he came out with that huge wager. I was like, ‘Whoa!’”

Although Vachaspati squeaked past to the semifinals on a wildcard advance, he couldn’t push past to the final round. Still, for anyone worried that he might have had a hard time shrugging the loss off, it would be helpful to recall the bubbly, stress-free spirit that he’s consistently brought to the game.

Nowhere have these mannerisms been more apparent than during one of Vachaspati’s “Jeopardy!” episodes last year, in which a question surfaced regarding the name of Blanche DuBois’ sister, a character popularized in the 1952 film “A Streetcar Named Desire.”

Vachaspati couldn’t resist answering in earnest: “STELLA!” he called out.

He may know a lot of things, but perhaps the most valuable one is how to enjoy himself.