Students cope with medical difficulties while on campus 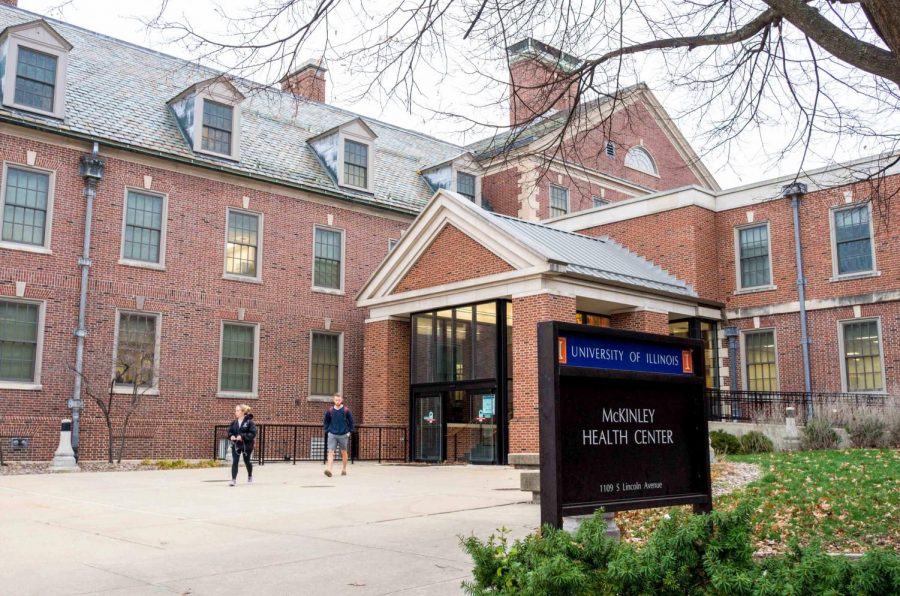 The outside of McKinley Health Center in Urbana, IL. Many students on campus use McKinley as a resource for medical, health issues.

Dane Kozak is a hard-working student. A senior transfer student from the University of Illinois at Chicago, he is currently undeclared but pursuing computer science and biology. What many don’t know, however, is that Kozak struggles with a serious illness.

Kozak has Crohn’s disease, a condition that can be both painful and debilitating. He was diagnosed in seventh grade. Since then, he has discovered a variety of strategies for dealing with his condition.

Typically, Kozak said he doesn’t have any problems day-to-day, but the management of his disease is the hardest.

“I have to stay healthy,” Kozak said. “I have to be getting enough sleep every night, have to be eating well.”

Sleeping and eating well are things all college students should be doing but are especially important for Kozak.

However, Kozak said college fosters an environment where it is inherently difficult to keep up with health management.

“Everyone should be (staying healthy), but to be honest, college is structured so that you can’t in a lot of ways,” Kozak said. “You’re expected to sacrifice your sleep or your health to study, to do well in lots of these classes.”

One difficulty arising from Kozak’s condition is certain food sensitivities, which is a concern for anyone on a University meal plan.

“It was definitely something I was worried about,” Kozak said. “When I started at UIC, their dining hall food did not agree with me.”

He believes his condition may have worsened in part because of UIC’s disagreeable food.

Kozak believes the University does an excellent job of accommodating students like him through programs like Disability Resources and Educational Services.

DRES provides Kozak with his Letter of Accommodations, or LOAs, allowing him extended time for tests, to leave class at any time during a test and increased leniency toward absences.

For treatment, Kozak goes to Carle Foundation Hospital. He has a new doctor there, Dr. Simon Crass.

“It was a big transition,” Kozak said. “I have my home doctor, she knew this doctor.”

Kozak’s doctor back home recommended he get another doctor in Champaign since he would be here for so long. He still sees his old doctor when he goes home.

As a transfer student, Kozak said the transition to a new college was difficult.

“On the medical side of things, it was a nightmare,” Kozak said. “Since I was changing doctors, I had to get a recommendation to even see a doctor here. Then I had to get prescriptions transferred, all this stuff — all this approval for insurance. At the same time, I’m switching over to student insurance because my dad retired a year ago, so his insurance was ending.”

After he switched to student insurance, Kozak had to evaluate which doctors he could see and what treatment he could get. He had to figure all this out in August, the onset of the school year.

“This was taking all my time, really,” Kozak said. “There’s this nurse who’s constantly calling me during the day, and I can’t answer these calls, and I just get voicemail after voicemail — like, I don’t know what to do … you know, like, I just need my medicine.”

Kozak got his medicine a little less than a week after he should have, in early September. After that, everything was routine.

Despite its difficulties, local resources are ultimately able to come to the rescue for students like Kozak.

Kozak isn’t alone in his struggle.

She was diagnosed at the beginning of her senior year of high school. May receives even more thorough care than Kozak.

May has nine specialists in downtown Chicago. The high level of attention needed to treat her conditions necessitated a channel between her doctors back home and her doctor in Champaign.

“We established a primary doctor here that I would communicate with, but for the most part, they’ve kind of agreed to do whatever my doctors (in Chicago) want them to … ordering labs when I need blood work done, if I’m sick or whatever,” May said.

May said the University does a good job of accommodating students like her.

Aside from the institutional support provided by the University, May also stressed the importance of friendship as a form of support. May said her roommate, Kaiya Scholl, freshman in Engineering, is a huge source of support at the University.

“I know she gets migraines a lot … so when she comes home from class I’ll bring her some crackers and ginger ale, and I’ll try and be like a mother to her,” Scholl said.