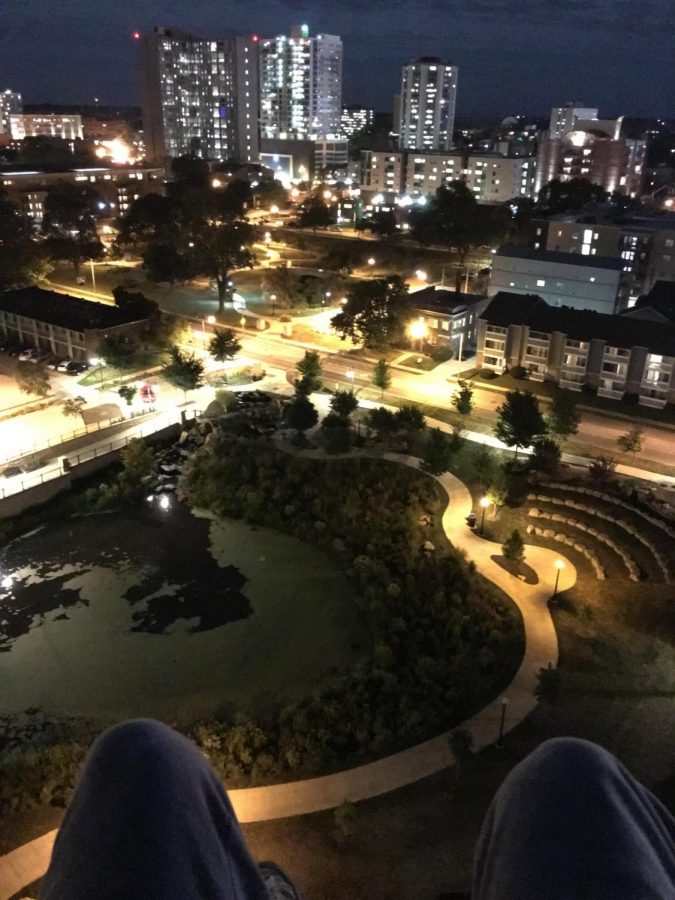 Dustin Frye sits on the edge of a construction crane 150 feet in the air. The crane was located above the midtown apartment building just north of Green Street.

Only one thing went through Dusty Frye’s mind after he fell 20 feet from the McFarland Bell Tower.

Frye, sophomore in FAA, describes himself as a “recreational climber,” meaning he climbs anything from boulders to buildings. Coincidentally, he is also an architecture major.

Frye fell about 20 feet off the McFarland Bell Tower on Oct. 13. He went alone with no equipment and started climbing right before sunrise. His plan was to wedge himself in between two pillars and to shift his way up until he reached the first platform. From there, he planned to take the ladders to the top.

“It was for the challenge,” Frye said. “I’ve climbed everything else tall in the area … I walk past it every day on the way to class. I grew up here so I’ve seen it my whole life. It was just the next step, I guess.”

He encountered a problem right before reaching the first platform.

Frye didn’t want the cameras to see his face, so he decided to face away from the bell tower. Once he got to the first platform, he couldn’t move his body to grab onto the railing. He started to climb down and soon slipped. He fell and landed flat on the concrete.

He then called the ambulance for himself.

“For a split second, I thought I was fine,” Frye said. “The adrenaline was running through my system. I was like, ‘Maybe I can just walk away.’ Then I kind of looked down at my feet, which weren’t sideways by any means, but they didn’t look right. So I was thinking, ‘Well, maybe I’m not gonna walk away from this one.’”

Frye was bedridden for a couple weeks and had to stay home for several months. He goes to physical therapy twice a week. Now, he is in a wheelchair but is expected to eventually make a full recovery.

Last semester, his grades took a toll because of his injuries. He received three incompletes in his classes and had to drop one.

Frye said he’s been climbing for as long as he can remember. He started out climbing rock walls when he was a kid, which eventually turned into bigger and taller achievements.

What Frye likes about climbing is the opportunity to see the world in an entirely different way.

“I do something that no one else does, really,” Frye said. “I kind of see the world as my playground.”

The McFarland Bell Tower isn’t the only campus building Frye has ascended.

He also climbed the Armory and said it was one of his more fun and challenging climbs. The way the building is structured made him have to leap about six inches to reach each grasp.

Since he usually climbs early into the morning, Frye said he’s not usually afraid of getting caught. According to him, “Most people don’t look up.”

When he forgot his keys to his apartment last semester, he sometimes climbed onto the roof of his building through his balcony to let himself in.

Frye often climbs with his older brother, Luke, at Urbana Boulders. Luke said over the years, his brother’s strength has greatly improved.

“The quickest thing that you really get better at is your grip strength and your extra body strength,” Luke said. “Once he got a little strength, he really started to progress.”

Luke thinks climbing is a great outlet for his brother but does not fully agree with his hobby of climbing buildings.

“I think that it’s a nice combination of being physical exercise, but it’s also kind of like problem solving,” Luke said. “As long as he’s healed fine, then I think that climbing is a great option for him.”

Frye said he will climb again once he fully recovers, but he is not as fearless as he used to be. He plans to ease back into the hobby.

While urban climbing is something he enjoys, Frye does not recommend it to others because of the potential dangers. If he does climb the bell tower again, he said he’ll bring a rope.

“A lot of the stuff I climb, no one in their right mind would dream of climbing it ever,” Frye said. “But in my mind, it’s fair within my capabilities, and therefore safe. The bell tower was probably an exception, and I can definitely see that now.”