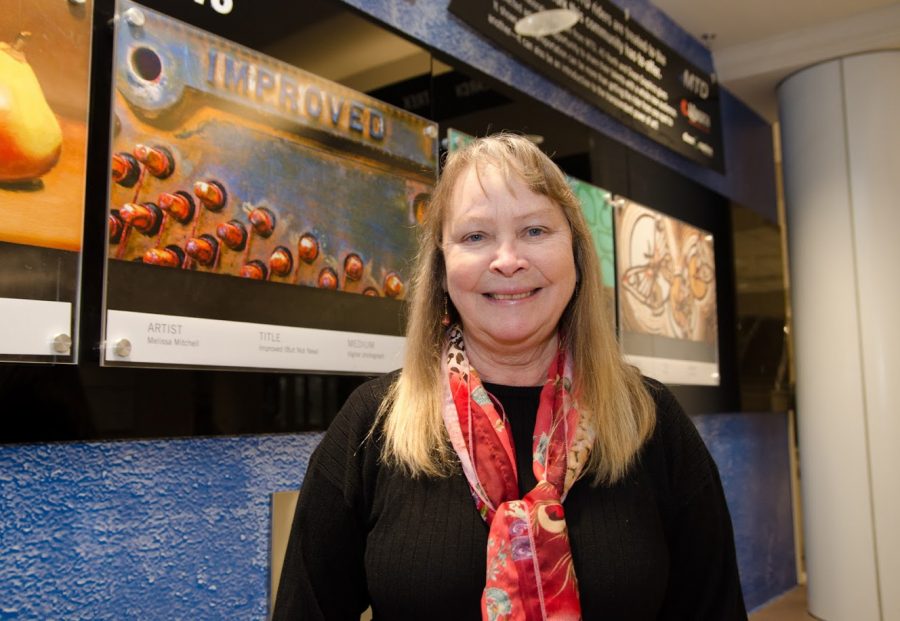 Melissa Mitchell stands infront of her artwork "Improved (But Not New)" in the Illinois Terminal in downtown Champaign. Her photograph is currently featured in the MTD Art program.

Melissa Mitchell, who spent her childhood jumping into everything from singing lessons to school plays, ventures wherever her fascination with art leads her.

Her destinations aren’t always tourist attractions; in September, she found herself behind a random building in a small town near Columbia, Missouri.

“We just drove through an alley a block away from the inn we stayed at, and there were the insides of this old upright piano out there, leaning up against an old pickup truck,” Mitchell said.

The Champaign resident took a photograph of the rusty piano, and it is currently displayed on a variety of MTD buses circulating the campus. It’s a member of the latest collection of art featured by the MTD Art Program, supported by a partnership between 40 North, CUMTD and Dixon Graphics.

The program, for which new and experienced creators alike are eligible, aims to both publicize the local artists of Champaign County and brighten the transportation experience on MTD buses.

Kelly White, the executive director of 40 North, prides MTD Art for benefitting the audience as much as the artist.

“What’s great about a program like MTD Art is that it takes art into an everyday landscape,” White said. “(Passengers) get to experience some art, and maybe that provokes a thought in them, or reminds them of something that they enjoy. It just might help their day a little bit as they’re going from one place to the next.”

MTD Art was initiated late in 2012, and it was inspired by a Champaign-based artist who supported sprucing up the interiors of the buses that he rode so frequently around town.

Nearly six years later, with artwork being swapped in and out on a quarterly basis, MTD Art has faced no shortage of applications.

The most recent deadline for submissions saw the entry number climb over 100, a record high for the program.

Despite the massive pile of images to choose from, White believes that even entries at two opposite ends of the artistic spectrum can share a realm of harmony.

“Sometimes they look great together,” White said, “even when the artists don’t know each other and their styles are completely different.”

Take “Seckel Pears,” for example. The piece, an oil painting by Sara Jahn, a resident of Champaign, was selected as one of the four to reside on MTD buses until the end of April.

In the low, intimate space that Jahn carves out of her quiet canvas, the fruit that bears the work’s title is so vividly imagined that it seems not only to possess hues and shades but weight and depth as well.

“I always have this problem with going through an existential phase whenever I begin something new,” Jahn said. “When you start it, it doesn’t really look like anything good. As you progress, the colors and shapes come out and get to be more defined.”

Compare Jahn’s work with “Earth Scape,” a block print fabric made by Lara Orr, an Urbana resident. Whereas the former work aligns itself with a more literal interpretation of its surroundings, the latter’s wavy yet geometric environment doesn’t emulate reality as much as reflect it.

“Most of the work that I do is, in some capacity, a recording of experience of this visual library I’m constantly building on,” Orr said. “I’m seeing different things, and I’m experiencing different things. All of that influences the colors and shapes I’m using.”

In her words, Orr grew up in Urbana experiencing art rather than making it, attending Saturday Art School at the University until she was in sixth grade.

She rediscovered artmaking while pursuing a fashion design degree in college, where she took classes in etching, screen printing, bookbinding and ceramics.

While she doesn’t feel the bulk of her work is rooted in any greater meaning, she often seeks guidance from the outdoors.

“People always ask me, ‘How do I choose colors?’” Orr said. “I just say, ‘Look outside. Nature usually gets it right.’”

Erica Stark, resident of Urbana, whose woodcut print “Phases” is featured for this period of MTD Art, would likely comply with Orr’s advice. Each of the three butterflies gently drifting through the air of her piece pop with golden rings of joy, speaking to the gracious hospitality of the earth.

The print, however, is just as much an introspective work as it is an observational one.

“I kind of saw the piece as an image of development, sort of like blooming,” Stark said. “When you’re going through life, you see yourself going through these phases when you’re in it, but when you look back, you can see that you’ve actually come into your own in ways that you haven’t noticed.”

Stark’s illumination ties rather well into the thematic core of MTD Art.

Stepping onto a bus can be like hopping onto a freeway of thought; once the bus rolls into motion, you begin to race your perception of the world around you, darting your eyes back and forth between the streets and buildings that whiz by.

It’s only when you get off that you collect and embrace what you’ve passed.

Through MTD Art, Mitchell, known in the art community for her assemblage work, not only continues to write her own story but encourages others to do the same. Her studio, cluttered with a plethora of recycled items from flea markets and estate sales, serves as a testament to the untameable spirit of imagination, refusing to be abbreviated by order or expectation.

In fact, it isn’t immediately obvious that the piano captured in Mitchell’s MTD Art submission, “Improved (But Not New),” is a piano at all.

The tight boundary of the frame crops out any signs or indications that the big picture would give away, but Mitchell prefers the piece to stir up questions rather than answers.

“Most people wouldn’t know what it is, and I kind of like that,” Mitchell said. “My art tends to be pretty narrative. I always set things up with a narrative, like a movie. I set it up with a cast of characters and a little bit of a lead-in, and you have to figure out what the story is.”

Such is the magic of getting around. A rider can take the bus somewhere, or the bus can take the rider anywhere.

“However that exposure can get to you, it’s great,” Orr said. “If you’re on a bus, if you happen to look up, if your phone runs out of battery, if you’re running late, even if it’s a chance encounter, it has merit.”