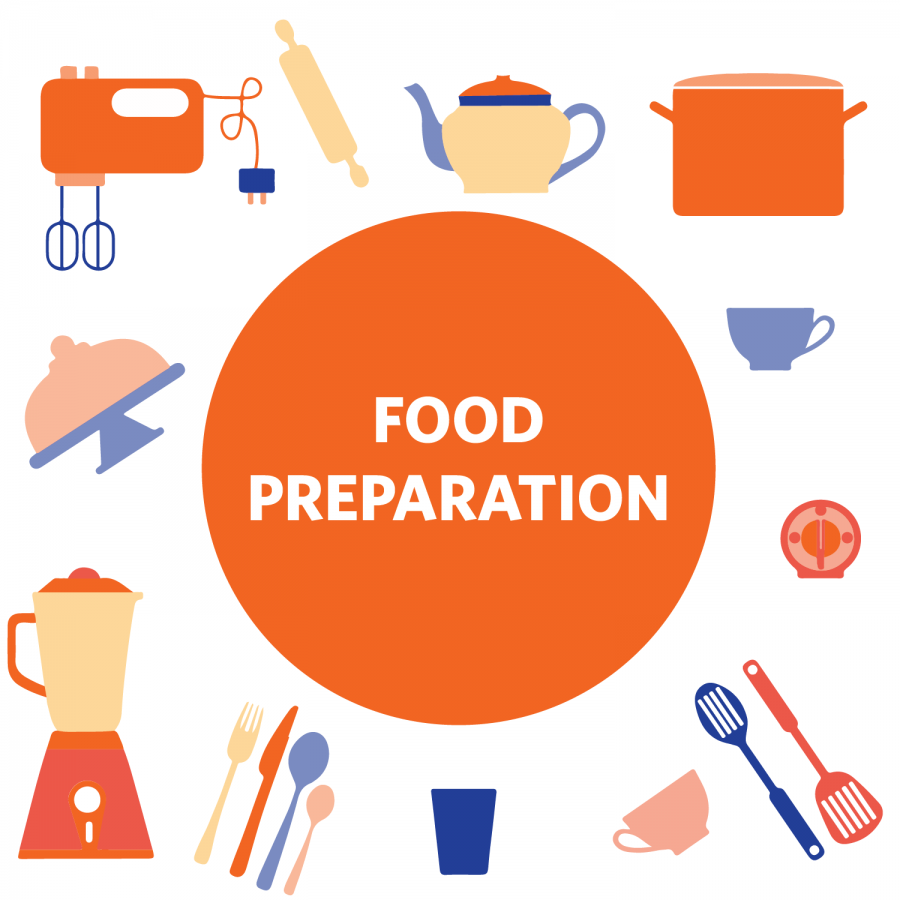 It wasn’t that Lucas Buccafusca didn’t know what good food was. It was making it that was the hard part.

Buccafusca, graduate student in Engineering, rarely hesitates to sample different things. He certainly didn’t fail to spice up his class schedule as an undergraduate at the University of Colorado, balancing his math-intensive core classes with mindful studies in philosophy.

It wasn’t until he came to the University, however, that he realized he couldn’t do much with food past dicing onions.

“My background (in cooking) was very rudimentary,” he said. “If you gave me ramen, I’d be like, ‘Oh, I can throw that in a boiling pot of water.’ It was a very informal thing.”

Fortunately, in one lucky browsing session on Reddit, Buccafusca stumbled upon a University course, FSHN 232, that could potentially pull his cooking skills out of the mud.

The reviews that former students had given the class made it look promising.

There was no way for Buccafusca to escape those painfully early lectures on Tuesdays and Thursdays. Still, the inevitable grogginess couldn’t compete with the rays of positivity stuffed in every lesson of FSHN 232, the Science of Food Preparation.

Firmly established as a requirement for Food Science, Dietetics and Hospitality Management majors, FSHN 232 is far from new. Multiple generations of students have chugged through its lively curriculum, which is designed to teach students how to prepare standard food products for safe volume consumption.

One of its recent graduates is Jill Craft, who has returned to the course as its instructor.

Craft believes the course can be of service to a wide range of students, whether they plan to pursue food management down the road as a profession or simply want to whip up a quick, healthy meal at home.

“I want (students) to understand what a quality standard product is,” Craft said. “When Food Science majors move on to the next step where they’re formulating for manufacturing, they can understand some of the basic concepts of what these foods do for the average person.”

The subject matter is tossed between lectures and labs. The lectures, held in a no-frills classroom setting, are the more traditional of the two class styles, walking students through tips on equipment safety and sanitation.

The lab sections, on the other hand, give students the chance to not only practice what they’ve seen in lecture but to explore what they haven’t.

The lab room, sitting in Bevier Hall, functions as a full kitchen. Renovated about eight years ago with a donation from Illinois alumnus Doris Kelly Christopher, it’s a treasure trove of top-tier cooking appliances, filled with ovens and stovetops.

Scattered television screens are connected to a live feed camera at the front of the room, enabling the lab instructor to project close-ups of demonstrations to each of the lab tables.

Nevertheless, Alice Moon, recent graduate of the University Food Science program, thinks the most useful tools of FSHN 232 aren’t necessarily the most flashy.

“(The course) showed me cooking in a different light because it showed me how important techniques are,” Moon said. “I always thought it was the ingredients that mattered, but it’s the technique that completely transforms the entire dish.”

Moon, who was a teaching assistant for the class for five semesters, can recite an entire list of cuisines that she assembled for the course as a sophomore, including plant-based proteins, starches, carbohydrates, meats, seafood, dairy and pastries.

At the end of each lab, partners present what they’ve made in the two hours they’ve spent together in front of their classmates. Of course, the students get plenty of opportunities to taste their peers’ lab projects as well.

Moon got her recipe for cream puffs from the course, and it now makes a regular appearance in her baking rotation.

“Cream puffs are one of the (foods) I use to impress my friends,” she said. “It’s so easy to do.”

Even Buccafusca finds himself carrying the course material beyond campus, even when it’s involuntary.

“I went home for the holidays in December, and (my family) made me cook for them,” he said.

Yirong Wang, sophomore in ACES, still keeps pictures of her favorite FSHN project, bright orange candies in the shape of bubbly flowers, on her phone.

Despite the cultural disparities she initially noticed between American and Chinese diets, teamwork guided her past the confusion she faced at the beginning of the class.

“Chinese food preparation is so different from here,” Wang said. “For most of the products we made in class, I had never heard of them. Every time I had something that I didn’t understand, I turned to my lab partner and asked, ‘Could you teach me this?’”

As the semester progresses and the course introduces increasingly complicated dishes, the students dive deeper down the rabbit hole of culinary arrangements. Food groups as familiar as dairy products can prove to be icebergs, with the bulk of their nuances hidden underneath the surface.

Different kinds of cheeses can have varying melting points in a frying pan, for example. Egg whites bear a soft peak as well as a firm peak, and attaining each isn’t as simple as carelessly whisking them for a minute or two.

Suddenly, failure can seem to have worse consequences than simply overcooking a leg of chicken.

Food science presents a lot of information to take in, Craft admits, not all of which students have to tackle in one go.

“(Students) will be asked, ‘Do you think your product is standard?’ If they made a mistake, they can own up to it and explain where they went wrong, so it’s not necessarily all or nothing,” Craft said. “If something goes wrong, they can make the adjustments, and they know what they can do and build on this knowledge.”

As a TA, Moon can attest that not every student is a cooking wizard at the starting gate. It’s a process in which students develop their intuition as a chef and as a food scientist.

“No matter where you start from, whether you’re more experienced culinarily or management-wise, you always see so much progress (from the students),” Moon said. “You can taste it, even.”

Buccafusca would surely agree. When asked about the quality of his cooking after having taken FSHN 232, he had an answer a little more colorful than before.