Police say Unofficial is much less wild than years ago 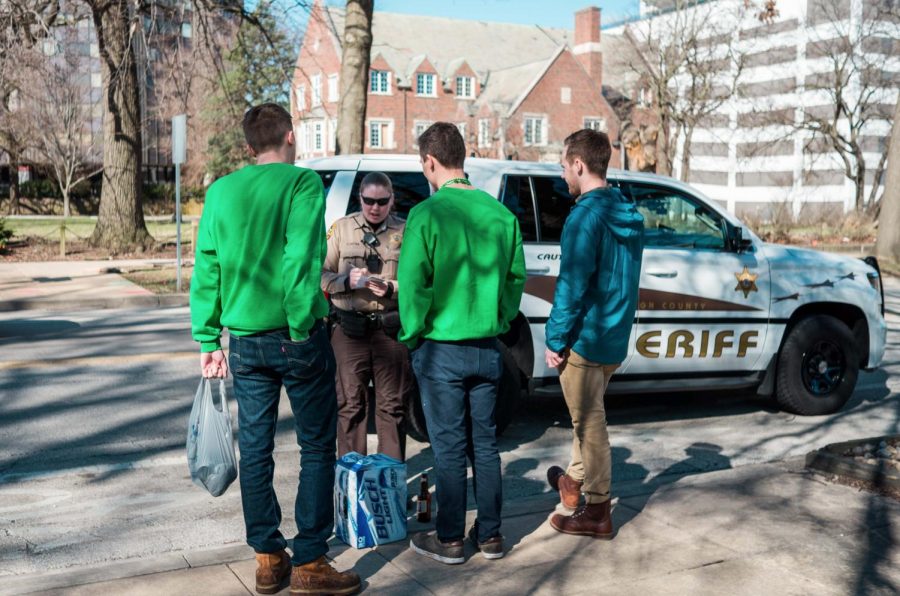 A police officer issues tickets hear Fifth Street in the morning of Unofficial St. Patrick’s Day. Students have privacy rights they can enforce this Unofficial.

Patrick Wade was a student at the University from 2006 to 2009 when he said Unofficial was at its peak.

Since then, Wade, communications director for the University of Illinois Police Department, said it has calmed down and generally become less eventful.

For Champaign police Sgt. Joseph Ketchum, last year’s Unofficial was fairly tame and it was one of the slowest years he had seen in a long time. Ketchum has been a part of the Champaign Police Department for 20 years.

University and Champaign police gave about 114 citations last year for various liquor offenses. That’s the lowest Wade said he has seen in a long time.

“People were going about their business and having a good time, but for a large part doing it fairly responsibly,” Wade said.

There weren’t as many active parties last year. Ketchum said they had to break up about two or three.

Unofficial was running smoothly until about 10:30 p.m. on March 3 when Jonathan Morales fell off a balcony.

“Any Unofficial that we have a death is not a good one,” Ketchum said.

Both Ketchum and Wade agreed that this year’s Unofficial should be slower and have fewer activities going on than years prior.

One aspect that affects Unofficial participation is the weather. Ketchum said if the weather is good, there may be more people out and if it’s not, more people might stay in.

Another factor both Wade and Ketchum attributed to a calmer Unofficial is fewer visitors.

Ketchum used to deal with visitors from places as far away as New York and Alaska. Last year, he said it seemed like the number of visitors decreased more.

Wade noticed the University students who participate are fairly mellow, even though there always are a few who cause problems.

The biggest concern with Unofficial is over-intoxication and binge-drinking.

What makes Unofficial different than any other weekend is that students start drinking as early as 5 a.m. on Friday and continue drinking until Saturday.

Last year, there were around 23 hospitalizations due to intoxication.

Substance abuse is also a problem.

“Students sometimes use Unofficial as an excuse to kind of go crazy with different sorts of controlled substances like ecstasy and some other substances out there,” Wade said. “Especially when you’re mixing that with alcohol, it can create a lot of problems too.”

A bar owner once compared Unofficial to a weekend with a home football game, Ketchum said. He doesn’t agree.

Wade made a similar comparison. He said a home football Saturday and Unofficial mirror each other: people start drinking early, continue to drink all day and even drink into the night.

What he said is different about Unofficial, however, is the attitude.

“When Unofficial happens, it’s more how drunk can I get, what sort of different ways can I rebel,” Wade said. “I think that mindset is different and that leads a lot of people down troubling paths where they get so intoxicated that they end up in the hospital or something like that, or they end up so intoxicated that the make some really bad decisions that can affect their academic career here at school or get them into trouble legally.”

Ketchum said the two are not similar because on no football weekend has there ever been a death.

During Unofficial, Champaign, the University and Urbana work together to keep students safe.

“We work very closely with both cities: the different police departments, the mayors, different campus units. We’re all literally sitting around the same table when we’re in the weeks leading up to Unofficial,” Wade said. “So we all have the same goals. (The) number one goal is keeping people safe.”

Champaign is home to almost all the bars and many student residences. Urbana is a bit different.

“Urbana does not have as many of the residences we have. They really only have one bar — which is the Canopy (Club) — that is affected by Unofficial,” Ketchum said. “So we’re usually a little busier than Urbana is on Unofficial.”

One of the University’s top priorities is retaining the integrity of the learning environment.

“Our focus here (at the University) is maintaining the safety of our campus community, making sure people can live, research, study, all have a good time and stay safe,” Wade said.

To ensure that safety, Champaign has roughly 100 officers scheduled to work. They start at 8:30 a.m. on Friday and work until 3 a.m. Saturday. There are more medical personnel and fire personnel are out checking balconies.

The bar age is also raised to 21 starting 10 a.m. Friday until 2:30 a.m. Sunday to prevent minors from attempting to drink in bars.

Wade wants to remind students of the medical amnesty policy. State law and University policy protect students from getting in trouble for calling 911 for someone who needs medical attention.

“I always tell people the police are not here to punish anyone; we’re here to keep people safe,” Wade said. “If you see something suspicious, you see someone in trouble, do not hesitate to give us a call. We want to help.”