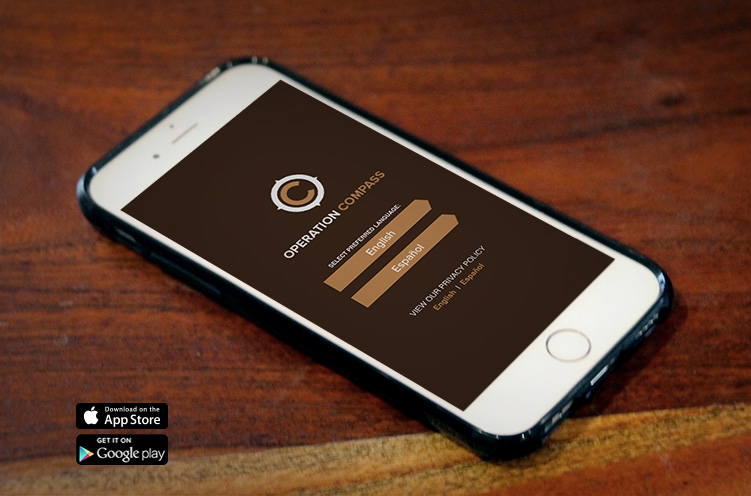 Lisa Mercer, assistant professor in graphic design and founder of Operation Compass, is working to combat human trafficking with the creation of a new app.

According to the National Human Trafficking Hotline, Illinois has the 10th most reported cases of human trafficking as of 2017.

The app, called Operation Compass, was launched in December 2015 and allows users to anonymously report cases of human trafficking from anywhere in the U.S. Reports are immediately sent to service providers and law enforcement, who are able to locate the reported instance and take action against human traffickers.

The app is part of a larger non-profit organization Mercer founded to create technology in helping fight human trafficking. Currently, there are two versions of the app available for download in the App Store and Google Play, including the national app, Operation Compass and Operation Compass North Texas. Mercer plans to launch a pilot program in Illinois this year to help fight human trafficking across the state.

“Human trafficking is really hard to identify,” Mercer said. “Especially if there are people who don’t self-identify because they may not be reaching out for help. It’s really up to us to rely on our instincts and trust that feeling when something is not right.”

While Operation Compass allows people to rely on their instinct and report any suspected instances of human trafficking, Mercer is planning on making some improvements to the app before it is launched in Illinois.

“Something that we would like to add would be an educational program to educate people in the trade industries about human trafficking — what it looks like, how to identify it and how to report it,” Mercer said.

While Mercer is striving to constantly improve the app, Operation Compass has already shown success.

As of March, the app has had 20 suspected cases reported, 1,802 downloads and has been launched 3,877 times. Operation Compass North Texas has also been of assistance to Mosaic Family Services, who receive each report made on the app.

“It gives people an immediate access point to be able to report something. Rather than having to go think about it or look for what to do, they can just take a quick look at the app and punch in information,” said Bill Bernstein, deputy director of Mosaic Family Services.

Bernstein explained it’s a great tool for the community because it serves as a way to take immediate action when information is sent in.

Mosaic Family Services works to serve survivors of human rights abuses, such as domestic violence and human trafficking. They provide an array of services to victims, including legal services, medical services, shelter, mental health services, as well as assigning a client advocate to oversee the case and coordinate services for the victim.

“Preventative measures in terms of outreach and education to populations that are potentially working in industries are more prone to having human trafficking exist,” Chang said. “We also focus on prevention education … about potential red flags, indicators or things to look out for, so they don’t find themselves in a situation in which they are being trafficked.”

The app includes a wide range of features that allow human trafficking victims and their traffickers to be located, as well as any details about the situation imperative to the case.

Through geotags, the app automatically populates the date, time and location. It also includes sections for descriptions of both the victim and the trafficker, so they are easily identifiable to law enforcement officials.

There are also sections to include any case-specific details and contact information for the reporter.

Mercer was inspired to create these specific features of the app through time spent talking with truck drivers, who are one of the largest population of people to report human trafficking instances.

Mercer even attended trucking school to learn as much as she could about the trucking industry.

“That’s really the whole premise of incorporating design thinking and research and design,” Mercer said. “It really allows the designer to know their user and to produce a product that’s really specific to their needs. You’re creating something with purpose and that can actually be used.”

One of the things Mercer noticed about the trucking industry was truck drivers often neglected to report suspected cases of human trafficking, even if they had a gut feeling there were possible victims in the area.

“I think there is this idea that if you’re not sure if it’s really something, should it be reported?” Mercer said. “There’s this question of what if I’m wrong (and) I think that stops many people from reporting it, even outside of the trucking industry.”

Anonymous reporting allows truck drivers, or anyone for that matter, to submit information in a way that they’re comfortable with. It’s on their own terms, she explained.

In the end, Mercer said it still contributes information to law enforcement and service providers, who will be able to then help the victim.

Mercer said it is particularly prevalent to bring awareness to human trafficking because of how hard it is to identify. Many victims don’t even self-identify or reach out for help.

Bernstein has noticed this when working with victims through Mosaic Family Services.

“Human trafficking is about the most hidden crime imaginable. The traffickers are not going to want anyone to be aware of what they are doing and the people who are being trafficked do not self-identify or view themselves as victims,” Bernstein said. “They may feel that they got trapped into the situation by their own mistake or post-traumatic stress or fear for their family.”

The best way to uncover this, Bernstein explained, is to have the most people aware of it.

Mercer is especially proud of the way the app brings law enforcement and service providers together to work towards a common goal. She said this creates a great environment for victims and helps prevent future cases of human trafficking.

Ultimately, Mercer hopes to create a foundation in Illinois and develop more connections with service providers that are willing to help vulnerable populations that could fall victim to human trafficking.

She hopes that Operation Compass and other new technologies will create a future where more people are educated about human trafficking to prevent future instances.

“My hope is that we will gain more accurate data when it comes to human trafficking,” Mercer said. “I think what this app allows us to do is create a collaboration between service providers on accepting suspected cases, and hopefully, through that, we can find ways to identify accurate data in human trafficking.”