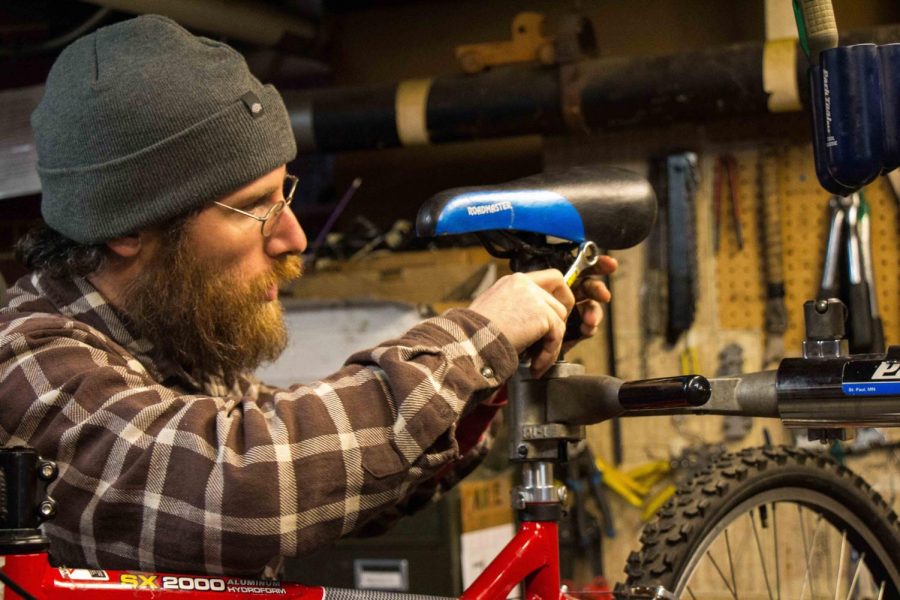 Jacob Benjamin, manager of the Campus Bike Center, welcomes students to the workshop to learn how to fix their own bikes. The Campus Bike Center on campus along with one in downtown Urbana, make up The Bike Project, a nonprofit “do-it-yourself” organization.

As polite as he is, Jacob Benjamin is usually one to turn down a handshake.

Being the proud manager of the Campus Bike Center, Benjamin consistently keeps his palms smeared with a thick coating of grime, handling scores of gears, chains and tires while manning his post.

Other mechanics may take pride in their stained clothes, flaunting them as proof of a hard day’s work. For Benjamin, messes don’t necessarily indicate successes.

He isn’t ambivalent because he’s lazy. In fact, he’s just trying to abide by the job description.

“In theory, somebody in my position should be able to put on white gloves and not get them dirty all day,” he said.

Benjamin echoes the mantra of the Campus Bike Center, which strives to escape the perceptual confines of a traditional bike shop. Rather than take a worn bicycle off the rider’s hands and tune it up behind closed doors, the staffers at the tiny campus garage don’t really do much of the repairing at all. They teach the customers how to do it themselves.

“There’s a strong impulse to do work for people when you think you’re helping them,” Benjamin said. “Really, we need people to be doing their own work. (If) you get a flat tire and you don’t know how to fix it, you’re not gonna ride a bike.”

The Campus Bike Center is one of the two lots that make up The Bike Project, a nonprofit “do-it-yourself” organization based in C-U. The first location in downtown Urbana, established in 2006, found its home in the basement of the post office, which had by then discontinued its use of the space.

An old, rusty conveyor belt, which was once used to swing packages up to the ground floor, still occupies the center of the room today, doubling as a shelving unit for crates and tools.

Though Eichelberger, a studied grease monkey himself, knows his way around a set of wheels, he makes sure to stay on the sidelines while patrons tend to their own individual tasks.

“One of our policies is that we’ll never take a tool out of someone’s hand,” Eichelberger said. “We’ll only ask if (customers) need help with anything and give them some pointers.”

The space has eight working stands, each reserved for members of the organization’s Build-a-Bike program. After paying a fee for membership, students and residents have access to tools and resources needed to renovate their bike, either one they’ve brought themselves or one they’ve claimed from the store’s collection of donations.

Members keep their bikes in the shop while they’re in progress, usually taking from two to four weeks to complete the entire mechanism, depending on the initial state of the bike.

The gears, in Benjamin’s opinion, pose a roadblock for many budding mechanics.

“There are more moving parts in the gears than any other part of the bike, just about,” Benjamin said. “All the gears are exposed and end up wearing out a little faster. We try to run people through it, but there’s a learning curve, and they have to go through it a bunch of times.”

While they can ask for suggestions from the staff, clients decide what pace they prefer to build at, how much time they should work on the project per week and whether they want to finish the project at all. Without an autopilot to carry them through the brunt of the labor, it’s just a matter of how determined the members are to reach their goals.

Hasan Bhujwala, junior in LAS, stumbled upon The Bike Project last year while searching for a new bicycle within his budget. Back at home, he liked to take his old bike through a nearby forest preserve for a 27-mile-long round trip.

Even after having this riding experience, Bhujwala feels as though one-on-one sessions with volunteers from The Bike Project helped him reevaluate the art of cycling altogether.

“I didn’t know anything about bikes when I first went there,” he said. “I learned how to true my own tires, lube up my own bike and replace the chain. (The process) was never intimidating, and everyone was really helpful.”

The success of The Bike Project led to a collaboration between the University and The Bike Project in 2010, which created the Campus Bike Center with a grant from the Student Sustainability Committee. The shop continues to receive about 400 to 500 donated bikes from the University every year, plenty of which have been inexplicably left abandoned in the area.

Although smaller than its Urbana counterpart, the Campus Bike Center has no trouble catching its share of the summer rush when the weather finally warms up. With spring just around the corner, Benjamin and his co-workers are busy with refurbishing used bikes, the sale of which will supplement the popular Build-a-Bike program.

Benjamin predicts the 60 or so bikes they’ve already managed to prepare will fly off the shelf by June, with no weaker numbers to be shown from Build-a-Bike, which tips the shop beyond capacity every summer.

Currently, the Campus Bike Center offers a full-year membership in exchange for eight hours of volunteering around the garage.

“Just come on in any time we’re open and say you’re here to help,” Benjamin said. “We’ll have you sorting tires, cutting up rags, stripping parts or sweeping. It depends how comfortable you are around a bike and what tools you’re willing to use.”

The application of those tools, Benjamin said, is as important to a mechanical education as is the application of theory. The Bike Project aims to convey that bikes, a more environmentally friendly alternative to automobiles, also help to support a growth mindset and an active lifestyle.

In Eichelberger’s eye, the most conscious way of getting around can also be the most rewarding.

“I feel like it’s really empowering for people to show someone that they can build something, especially a form of transportation,” Eichelberger said. “If they’re out and they get a flat tire or their chain breaks, they’re going to know what to do.”

As for the struggle of discovery, Benjamin considers it a valuable step toward self-sufficiency.

“People are cautious and feel like if they don’t know something, they can’t learn it,” Benjamin said. “That’s not the case at all. Learning new things is kind of scary, but it’s important. That’s our mission.”