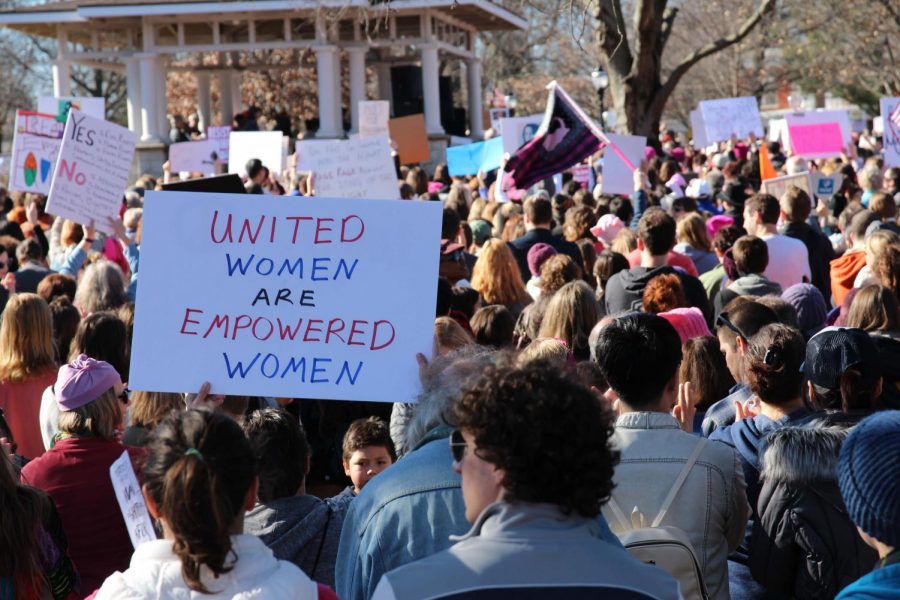 Appriximately 5,000 local men and women gather at West Side Park before marching through downtown Champaign on Jan. 21, 2017.

The University is celebrating Women’s History Month with a particular focus on bringing intersectionality and inclusion into the discussion.

The Women’s Resources Center created events that bring awareness to the celebrations of women’s history. Several events are collaborations with cultural centers and organizations on campus that bring attention to the complexities of being a woman.

Andrea Rundell is the executive director of The University YWCA. When discussing the importance women’s history, she said, “history, as it is normally defined and taught, tends to be about what men have done.” Rundell said women are erased from history, the credit of their achievements is given to their male counterparts.

To counter this, the YWCA hosted its 32nd Women’s Achievement Celebration on March 8. At this event, awards were given to women who excelled in advocacy, business, social justice, STEM or education.

Empowering women is one of their objectives as an organization. They also seek to eliminate racism. These often intersect.

“The women’s movement and feminism have had a long history of having a very hard time recognizing black women and women of color,” Rundell said. “Asian Americans, Native Americans, Latinas (and) mixed race women have been left out of the conversation for a long time.”

Rundell, a feminist herself, is working to change that problematic attitude as the movement continues forward. She is not alone.

When it concerns issues of gender, Carpio said, “women are fed up with not being seen as equal as men.”

Carpio is particularly focused on gender equality as it relates to Asian women. She fights for visibility and a changed perspective of them. She also expressed the importance of minority groups supporting each other.

Araceli Diaz is the assistant director of La Casa Cultural Latina. While she also acknowledges the importance of recognizing women’s history, she expresses her grievance with Women’s History Month.

“When you put something, an issue or a population specifically, and give them a month, I think that it’s a start, but this nation hasn’t moved past that,” Diaz said. “What happens to the rest of the 11 months?”

Diaz said the awareness during this month is valuable. She said, however, that it is not enough; action must follow, or the awareness is pointless.

She sees her female identity inseparable from her “Latinidad.” These two dimensions of her character play an important role in her activism. She said the Latina community has its own specific issues concerning feminism. Diaz said it is important to see women as multidimensional people with intersecting identities including race and gender.

Four seniors take this into account in their celebration of women. Perry Ross, senior in Engineering; Marissa Sulek, senior in Media; Abby Baum, senior in Media and Rachel Janovsky, senior in ACES, created “The 100 Days of Women Project.”

Ross began this initiative last semester. Her purpose was to “create a platform to recognize the diversity on this campus of women and their accomplishments and what they do here.”

These four students distinguish passionate women on campus who are changing the world in a positive way. They discuss personally inspiring women.

A representative variety of powerful women is very important in this project. Baum said they honor women from a variety of backgrounds, professions and areas of study.

“We want to give people someone they can connect with or relate to,” Baum said. “Obviously, if we have one type of woman on the website, that’s not going to relate to everyone.”

“Look at who has power in these movements, whose voices are being centered, whose are not, who’s not in the room and why they’re not in the room,” Colome said.