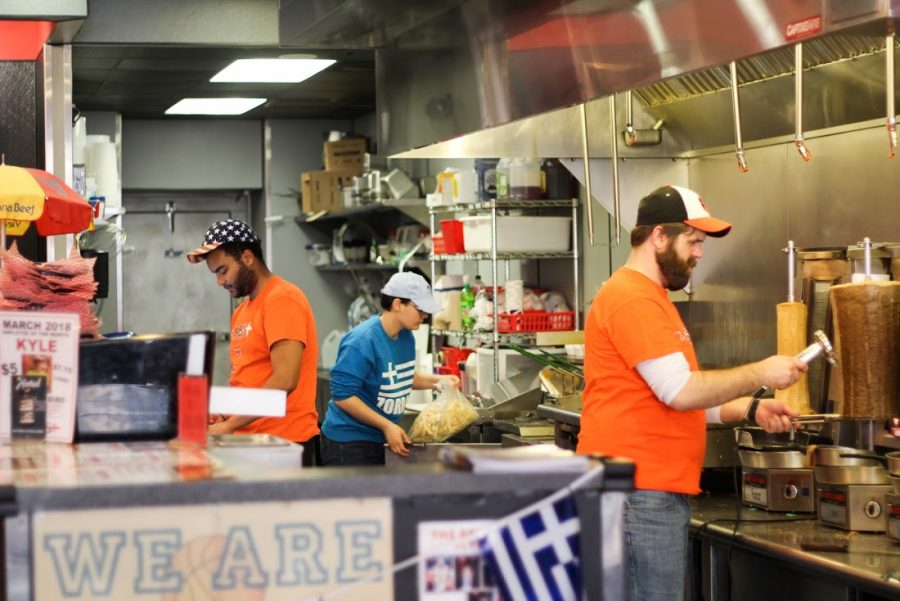 On most college campuses, both students and locals have their favorite spots to eat.

At the University, Zorbas on Green Street has been around since 1973 and has become almost synonymous with the University among alumni and students alike.

Zorbas has undergone many changes since it first came to Champaign and has had three owners during its 45-year run. One of the current owners is Eleni Anastasiadis, who runs the restaurant with her brother. Both University alumni, the pair will have owned Zorbas for a year in April.

Anastasiadis said that the hardest part of the transition to ownership was pleasing the restaurant’s regular customers, who were sad to see the previous owner leave.

“They all had … a special bond with him, and he was here every day,” Anastasiadis said.

She believes that the biggest misconception about her is that she is an “absentee owner,” meaning that she does not manage the restaurant herself though she is the owner.

“My brother and I, we’re Greek — we both own this place together. My dad comes in regularly … so I’m here all the time,” she said.

Anastasiadis said her family has always been self-employed, and it was always a dream of her father’s to enter the restaurant business. She hopes he can become even more involved in the restaurant once he retires.

Another misconception Anastasiadis hopes to change is that people believe Zorbas has changed for the worse under the new ownership.

All the recipes are still the same, Anastasiadis said. However, she has made some additions to the Zorbas menu, adding Chicago style hot dogs and Italian beef.

Some bigger changes have happened at Zorbas years before Anastasiadis took over the establishment.

A fire occurred in 2011 on the upper level of Zorbas, and the restaurant was closed for a year to repair and remodel. Anastasiadis said it was mostly due to water damage.

Zorbas also used to have a liquor license and a smoke lounge in the back of the restaurant in days-gone-by. Anastasiadis has also been told by many alumni that they recall Zorbas hosting a Jazz Night, which was popular among its patrons.

Many of the Illini Athletics memorabilia, which adorns the walls of Zorbas, was donated by Jerry Montgomery, who has been a faithful Zorbas customer since its conception in 1973.

Montgomery accumulated many of the Illini posters he donated to the restaurant because he is a big fan of the University’s sports teams.

“I decided that I needed to find a place for them so that when I was dead and gone, somebody would be able to enjoy them,” Montgomery said.

Montgomery described Zorbas as one of his favorite places to hang out.

Colton Morris, Zorbas general manager, said that they get a lot of university alumni visit the restaurant, and it’s really cool to hear about their stories in the past.

“That’s my favorite part about working here,” Anastasiadis said. “People that come in, and they’re like, ‘I used to come in here 30 years ago,’ or ‘I went to school here 20 years ago, and I’m glad it’s still open.’”

Both Morris and Anastasiadis agree that the busiest time of day for Zorbas is at lunchtime year-round. However, the restaurant wants to attract a bigger dinner crowd as well.

“Nighttime is … when we have some of the best deals to try and get people in,” Morris said.

“Our biggest thing is to try and get everything prepped and out as soon as possible,” Morris said.

Zorbas takes care of its more intensive food preparation in the morning, like making the restaurant’s sauces.

Anastasiadis said they make all their sauces in-house. All of their vegetables are cut fresh daily, and their meat is put out daily as well. This happens all in the morning before they open.

Anastasiadis said Zorbas has a unique gyro sauce. It’s not exactly tzatziki sauce; it’s their own special blend, and people love it, she said.

“I’ve been to so many gyro shops in Greece, in Chicago, and I’ve never tasted anything like it,” she said.

Anastasiadis attributes Zorbas’ success partially to the longevity of the establishment. She said she tries to care about her customers by being at the restaurant every day and trying to build relationships, making sure that everyone has a great time.

Zorbas also refrains from being wasteful by helping the community. Morris said whenever the kitchen accidentally makes food that was not initially ordered, it gives the extra food to the homeless on Green Street.

They also try to provide the homeless in the area with meals on major holidays, like Thanksgiving and Christmas.

“We’ll be slow, and we’ll take out samples, and we’ll take them food as well,” Morris said. “I think it’s a big thing that we kind of pride ourselves on is not being wasteful.”

Anastasiadis believes it takes a certain kind of personality to be able to run a restaurant.