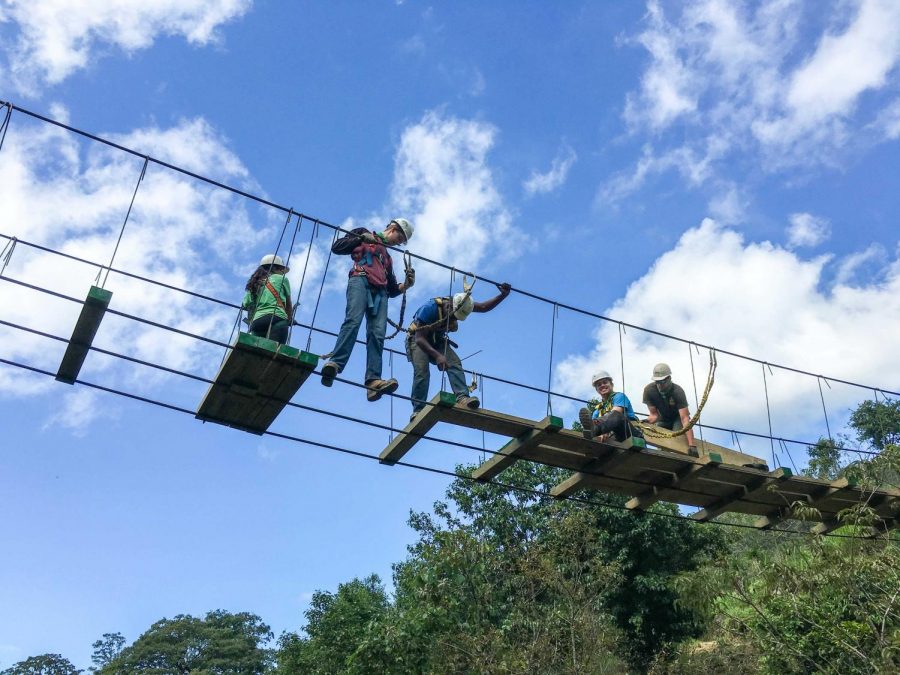 Photo courtesy of Bridges to Prosperity

Students from Bridges to Prosperity University chapter went to Paztula, the town located in the mountains under the municipality of Joyabaj in Guatemala, in summer 2016 to build a bridge there.

Bridges to Prosperity is in the midst of planning their third trip to a community in need of a bridge in a developing country. This year, four of the chapter members from the University will be traveling to Bolivia over the summer.

Bridges to Prosperity is a national organization that plans and constructs bridges for communities in need in other countries. There are chapters at universities where students are able to plan and receive real-world experience while giving back.

This will be the organization’s third trip, since their chapter is only two years old. There are 30 people involved in the organization, and all of them work toward planning the construction of the bridge together.

The money to fund these trips comes from the national organization, but some of the funding is also raised through sponsors, university departments supporting study abroad programs and the students on the trip.

Each year, the national organization chooses where the bridges will go based off of what site has the biggest need and is technically feasible. Chapters submit applications and then decide which chapter will go where.

The trip this summer will take place in Bolivia. Students will spend six weeks there with University of Colorado Boulder’s Bridges to Prosperity chapter as well.

“The trip this year is special because we’re going with CU Boulder, and we’ll be able to collaborate with them and learn from them because of all the experience they have,” said Fangxing Liu, junior in Engineering.

Liu joined the chapter when it first originated two years ago. Liu is the marketing committee leader, where she collaborates with her team to design the website, t-shirts and flyers.

There are three committees that makeup Bridges to Prosperity, which are fundraising, marketing and external relations. Fundraising often reaches out to local shops to donate a percentage of profits on planned days to their trip.

“It was a very interesting and profound experience. Designing the bridges, starting from scratch, doing it by our self and actually traveling there just changes everything,” said Yanbing Wang, senior in Engineering.

Wang described the people that live in the communities and explained how much of a difference the organization makes in their lives. Last year, Wang traveled to Panama and worked with the people there, which helped her become more motivated while implementing the bridge.

Many of the members involved in the club are engineering majors because they want to get involved in extracurriculars for their major, but all majors are welcome to join.

They only stayed for four weeks in Panama, and they’ll be staying for over a month this year in Bolivia. Wang said the group gets to know each other extremely well and bonds over the time spent there.

Sam Kottoor, sophomore in Engineering, has spent the past year a part of Bridges to Prosperity. Kottor ran the Instagram page and is the cultural relations manager for the trip this year.

Kottoor joined Bridges to Prosperity because he wanted a club that was aligned with his major in civil engineering but was also service aligned. Kottoor also enjoys being in a club that is much smaller than most others, so he is able to connect and get to know everyone.

After traveling to Panama last year, Liu learned to expect the unexpected from the weather. She said they experienced showers of rain each day around 3 p.m.

She said this year will be different because they will be staying longer than previous years.

“Staying for six weeks will be interesting because of our living conditions and sleeping in sleeping bags, but being with everyone is really fun,” Liu said.

Kottoor said the bridges make a huge difference in the communities and gives them easier access to get to school, more job opportunities (due to being able to reach other communities) and access to food, water and other supplies.

“I definitely get something out of it. I’ve learned so much just about relating to people,” Kottoor said. “Taking this cultural course, where I’ve learned about how to approach service opportunities, and I think that’s formed me to be a better person.”