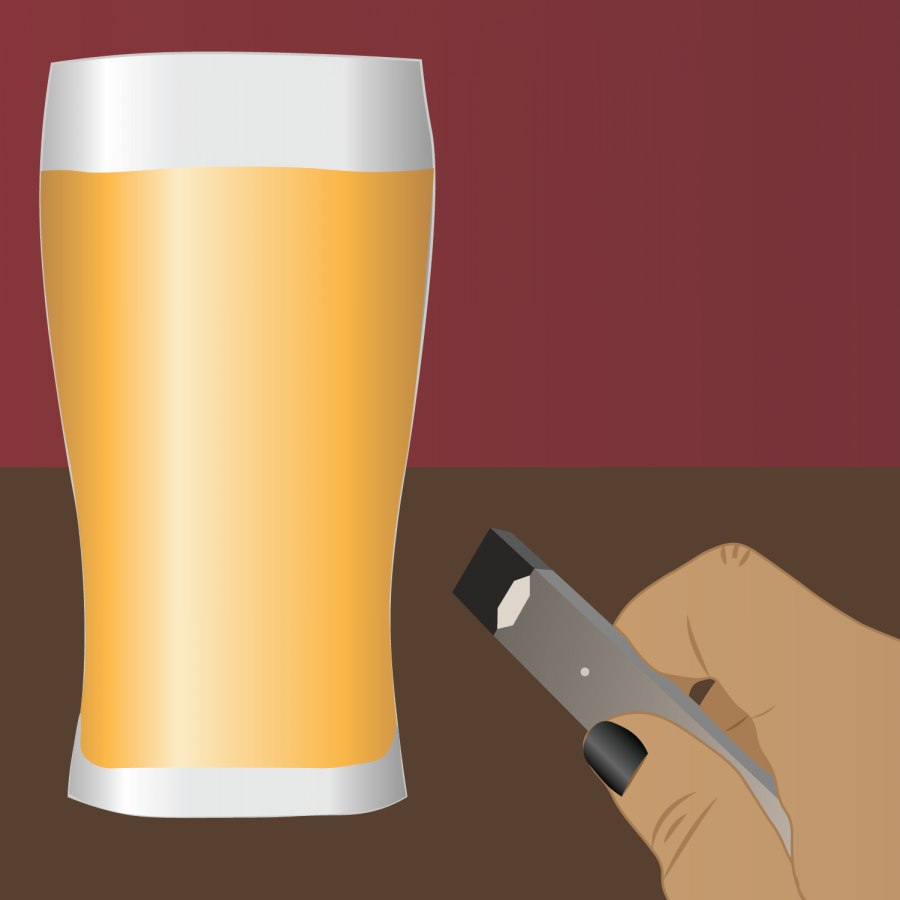 At nearly every bar in Champaign, students use Juuls. It is not uncommon to see students Juuling at The Clybourne, The Red Lion or KAM’s.

Juuling, however, is not limited to beer gardens. People Juul inside bars as well. And it turns out that Juuling, or vaping indoors, is legal in Champaign.

Champaign’s city liquor ordinance does not address Juuling, said Matt Roeschley, city deputy liquor commissioner. This is why, unlike the use of cigarettes, the use of Juuls is allowed indoors.

Chapter 16 of the Champaign Municipal Code defines smoking as “inhaling, exhaling, burning or carrying any lighted or burning cigarette, cigar, pipe, hookah pipe, pipeweed or other lighted tobacco product in any manner or in any form.”

Smoking cigarettes at bars is allowed outside in designated areas like beer gardens, but not indoors.

These areas do not have permanent or temporary walls, so they are not enclosed. The Smoke-Free Illinois Act prohibits smoking in enclosed areas, such as the inside of a bar. The act was passed in 2008.

The lack of regulations is not unique to Champaign. There are no state or federal regulations about indoor e-cigarette use.

Talia Shaw, health educator at the CUPHD, wrote in an email that at the time the law passed, e-cigarettes were very new and were not included in it.

Even though Champaign has no regulations on the indoor use of Juuls, vapes or e-cigarettes, Shaw wrote that individual businesses or municipalities can create their own policies regarding this use.

“We have a growing number of businesses in Champaign-Urbana that have included e-cigarettes in their establishment’s non-smoking policy,” Shaw wrote. “As an emerging public health topic (especially since we are seeing astronomical increases in youth users), I expect we’ll see some changes in the months and years to come, as more research is done.”

“From a police standpoint at least, we treat e-cigarettes or vaping or Juuling — anything like that — we treat it the same as regular tobacco cigarettes,” said Patrick Wade, communications director for the University of Illinois Police Department. “So that means no smoking on campus property, no smoking indoors. If anyone’s caught doing that, they would be subject to a citation under the Smoke-Free Campus Act.”

The act was passed to create a healthier environment on campus for faculty, staff, students and visitors. It also seeks to reduce the effects of secondhand smoke, to promote a more sustainable environment and improve fire safety.

Wade said the UIPD deals with the Smoke-Free Campus Act by responding to calls about smoking or Juuling and sending an officer to the area.

What realistically happens is by the time the officer arrives, the person who was smoking is gone.

“It’s a pretty low-priority call for us, so it might take a little while for someone to get there if they’re dealing with some other business,” Wade said.

For the UIPD, Wade said smoking on campus hasn’t been a large problem.

But the UGL tweeted on March 29 asking students to stop Juuling in the library.

The tweet said, “I CANNOT believe we have to keep saying this, but you can’t vape in the library, my dudes. No vapes/e-cigarettes/Juuls/whatever are allowed in the library. Please stop.”

Even still, Wade said the police department has not received too many calls about Juuling during classes.

“We certainly haven’t gotten a whole lot of complaints (about Juuling in class). I think if people are having an issue with it, definitely give us a call and we’ll do everything we can to address the issue,” Wade said. “Certainly if it becomes an overwhelming problem where it’s happening in a lot of classes, we’d want to deal with that.”