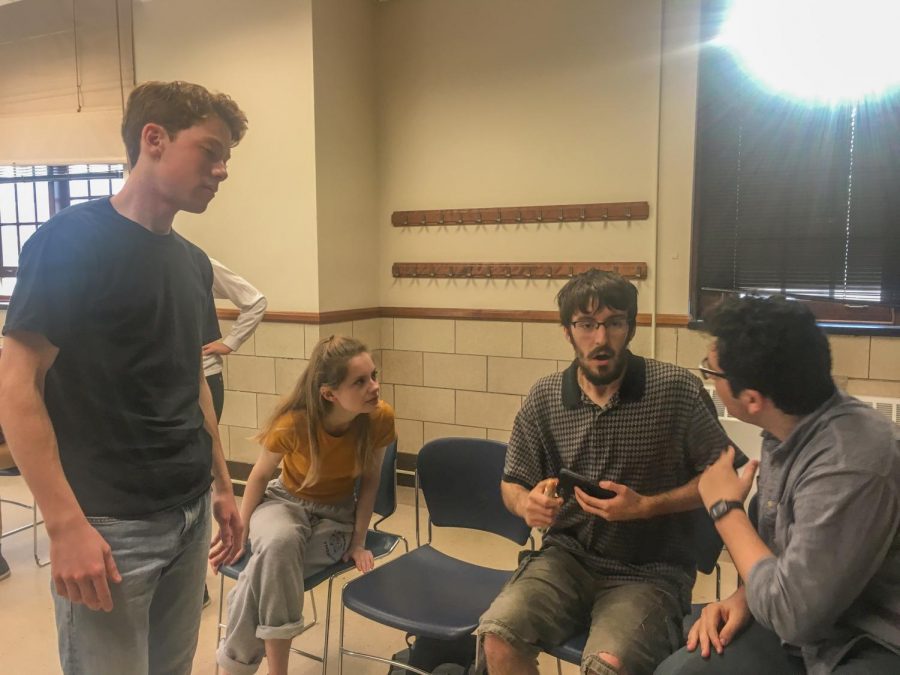 One University graduate student has been given the chance to see his script come to life on stage.

Written and co-directed by Xavier Retana, graduate student studying molecular and cellular biology, “Sign Here, Please” is a completely student-written play that is opening on Friday at the Community United Church of Christ.

The play is about an apartment building, run by Hans and Julie, where the two characters operate using an algorithm to make everyone living in their building happy. However, they take things too far and end up causing chaos. It took Retana about three months to write.

“The play’s very chaotic and moves between rooms. I like the idea that in a single building, you can have a billion stories going on at the same time,” Retana said, adding that some of the inspiration for him to write the play came from his time living in Here apartments in Champaign.

Other than the tumultuous plot, the play is filled with unique characters, some who behave unlike traditional characters by doing things such as breaking the fourth wall.

Kelsey Woodbury, freshman in LAS who plays Julie, said “Sign Here, Please” was artfully written by Retana in order to create the play’s uniqueness. She also said that Retana is a skilled director thanks to his previous theater background.

“It’s very interesting, seeing that he picks up on what can be the biggest challenges for the cast. So when he directs, he knows, from his experience as an actor, what to help us with and how to direct us,” Woodbury said. “He knows when to let us explore our roles by ourselves and when to tell us key points that would help us evolve as members of the cast.”

After writing the play, Retana took it to the Penny Dreadful Players, a student theater group that provides guidance and funding for plays.

Retana said he always knew he wanted to give “Sign Here, Please” to the Penny Dreadful Players because he values the help they provide to plays, such as their network of actors, advice on the stage and advertisements.

“I wanted to partner with (Penny Dreadful Players) because I really like their environment. Personally, they’re my favorite student theater group here,” Retana said. “So I gave it to them because I wanted to work with them, but they also provide help a lot and I value that, too.”

Working with a student theater group has many benefits, but the cast dynamic is a huge benefit that makes a big difference in how the play comes together.

Retana said that as rehearsals have gone on, the cast has become more talkative and social while they practice each scene.

“The great thing about working on student theater is that the cast develops a strong relationship with one another and it becomes like a little family,” wrote Justin Dirr, sophomore in LAS who plays Hans, in an email.

Woodbury said that the cast has been rehearsing “hard off,” which means that they know all of their lines and are mainly working on how each character is supposed to act and interact, whether they are speaking or not speaking.

Other than knowing their lines, actors must know at all times how their character would be expected to behave in the background of scenes. Woodbury said one of the hardest parts of acting is the commitment one must have to it.

Although the cast dynamic is strong and the actors know their lines, a play will not succeed without a good director.

Acting as co-director, Retana has a large responsibility to ensure that his play looks the way he wants it to, which he said can be a challenge.

“I really dug myself into a hole,” Retana said. “I should’ve written and not directed it, or directed and not written it because it’s just a really complicated thing to put on stage, and the chaotic nature of split scene has been quite the headache.”

Despite this, Retana said he is very happy with the play and loves seeing something that he made come to life. He said his favorite part of the process has been working with so many people in a collaborative environment and seeing them all work at the same time towards something he created.

Retana said he is in the process of co-writing another play with a cast member of “Sign Here, Please,” but he will not be the one directing it.

With opening night approaching, cast members and Retana said they are excited to see the audience’s reactions while watching the play and the humor that goes with it.

“I’ve fallen in love with the show’s humor, characters and story, and I can’t wait to share them with a wider audience,” Dirr wrote.