Bike shops, University work together to promote biking on campus 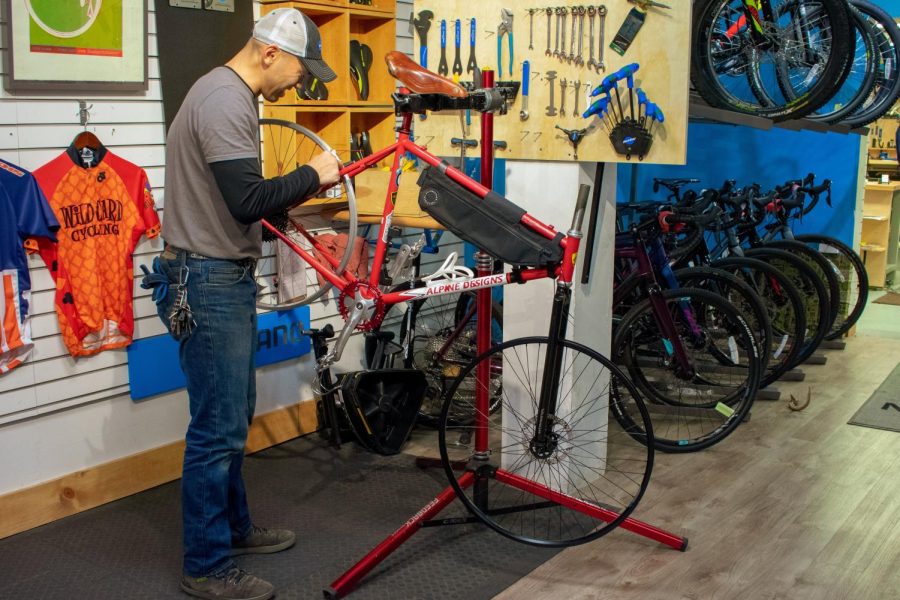 Paul Ignacio, sales manager of Neutral Cycle, works on a customer’s repair on Monday at their Green Street store.

To some, it’s just an odd smell; to others, it’s an odor. But to the devoted biker, the smell of oil and rubber is a delightful aroma.

As summer nears, bike shops shift gears and work with the University to promote biking in the community by educating and implementing measures for bike safety.

Paul Ignacio, Chicago native and sales manager of Neutral Cycle, first started working in a bike shop 12 years ago and feels grateful to be able to walk into one every day.

“Bike shops are definitely seasonal, and it does slow down a lot in the winters,” Ignacio said. “Spring and summer are every bike shop’s bonanza usually, but (in) this town, autumn is our busiest season.”

To counter the seasonality, Neutral Cycle has some core year-round employees but hires extra help in the busier months. Ignacio said they keep busy in the winters by focusing on renovations and expansions. Since Ignacio joined three years ago, Neutral Cycle has expanded every winter and recently opened a boutique in-house coffee shop called Brewlab.

Ignacio has biked everywhere he has lived — even in the winters — and doesn’t plan on stopping anytime soon.

The League of American Bicyclists recognized the University as a bronze-level Bicycle Friendly University in 2011; but Ignacio, a seasoned biker, remains unimpressed by the current biking infrastructure in Campustown.

“Green Street is pretty terrible to ride on,” he said. “It definitely needs work, and I can say that because I ride on it every day. It reminds me of Chicago in the early 2000s.”

Neutral Cycle has come a long way from being a used-bike and service shop functioning out of founder Tim Chao’s garage. Today, the business has positioned itself as a stalwart advocate for biking in the community.

“We really believe in the positive impact of bicycling,” Chao said. “For us, it is a vehicle that brings people together, and we strongly believe that bikes are for everyone.”

Neutral Cycle coordinates regularly with various biking organizations to plan events that will dispense information about safe biking and its benefits.

It is one of the major sponsors of Champaign County Bikes, a nonprofit organization that advocates for biking and organizes the C-U Bike Month every year.

“We’re always a big part of their Bike Month, which is coming up in May,” Chao said. “We will provide free bicycle clinics, diagnoses and tune-ups all throughout campus and the two cities.”

He also emphasized the importance of working with student organizations. Neutral Cycle is currently the main sponsor of the Illini Cycling Club, and once a month, it holds open shop hours for students to come in and work on their bikes, while the employees provide guidance.

Chao added that Neutral Cycle is also a sponsor of Illini 4000, a nonprofit student organization that is fighting cancer. In the past, Neutral Cycle has trained its mechanics and helped its fundraising events.

He also collaborates directly with the University and the Campus Bike Center on donations and campaigns that focus on bike safety, awareness and promotion.

Becoming a prevalent community hub is also important to him.

Neutral Cycle and the Campus Bike Center are working together on the upcoming Bike Rodeo, an event that aims to teach younger kids about safe biking, scheduled for May 5 at the ARC.

The Bike Project of Champaign-Urbana, an entirely volunteer-run nonprofit with a workspace in Urbana, was created by University students in 2006.

In 2012, the University approached the Bike Project with plans for opening a campus location that led to the establishment of the Campus Bike Center.

Jacob Benjamin, manager of the Campus Bike Center, described the Bike Center as a do-it-yourself education workspace for bikers. Benjamin said the primary mission of the Bike Center is to encourage biking through education and to help people get inexpensive bikes.

“If your bike is broken, you can bring it in and we could fix it for you,” he said. “But rather, we will show how you can fix it yourself. You’re more likely to ride a bike if you know how to fix it.”

Benjamin added at the Bike Center, you can do a lot of fun things with your bike. The Build-a-Bike program allows members to construct any kind of bike they want with prices ranging from $20 to $40; however, he said the entire process is usually quite lengthy, and many people prefer to just buy the refurbished bikes they offer.

To reap the benefits of this hands-on learning environment, members usually have to pay a $30 yearly membership fee or sign up for eight hours of volunteering.

While the Bike Center is quite involved in the education aspect of promoting biking on campus, Benjamin would like to see improvements on the engineering side as well — in the form of more bike lanes, specifically. According to him, C-U is very bike friendly because it is compact and flat.

“I think the University needs to provide more resources for this and maybe create a Biking Department,” he said.

Benjamin said education about the convenience and benefits of biking is also important; Chao and Ignacio agreed.

“I ride every day, and anyone can do it. You don’t need a special bike for it; you can do it with the bike you have right now,” Ignacio said. “You could ride for miles in the summer and go get ice cream — to me, that sounds like a good thing, and anybody can do it.”