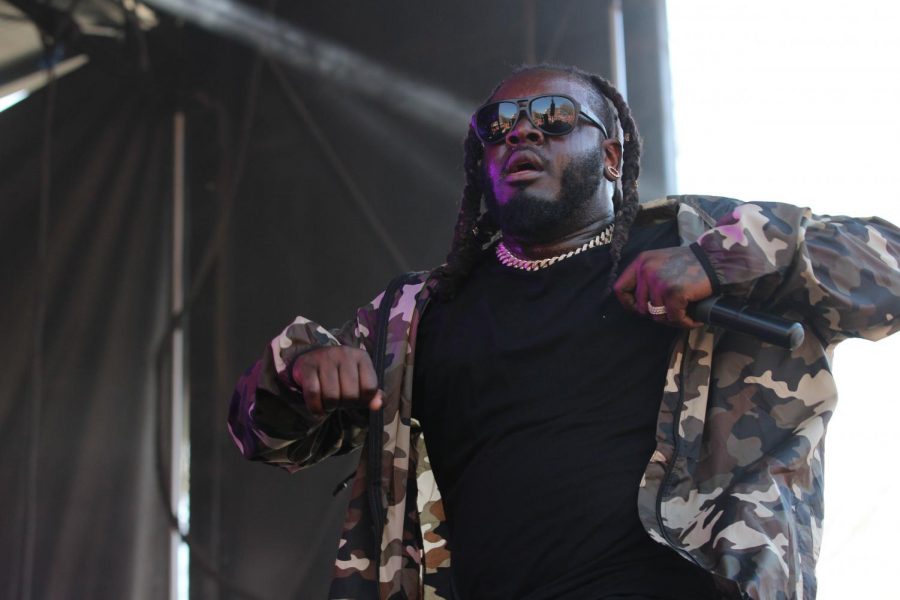 T-Pain performs at the Spring Jam 2018 on Sunday.

As strobe lights blared ahead of him, branding a path onto the stage as if it were a landing strip, rapper T-Pain dashed out from behind the curtains to face an unsurprisingly enthusiastic crowd of students huddled by the front of the Union.

To say that he merely dashed, however, would be incomplete; the artist skipped, hopped, swayed, spun and did everything he could to make a show out of walking in a straight line.

The audience, of course, ate it up, just like T-Pain did his energy.

The rapper, who headlined the Spring Jam event on the Main Quad Sunday night, might have burned through his stamina a little too hastily in the early moments of his performance.

No more than forty minutes into his approximately hour-long set, the rapper paused and took a seat at the foot of the DJ booth for a breather.

“This is ridiculous,” he said. “You guys aren’t tired?”

With the clock reading right around 4 p.m., the confused cheers from the crowd let on that the answer was a resounding “no.”

For other performers, this drive from the audience could have provided some adrenaline to feed off of. For the rapper, however, the very thought of continuing the set seemed like a chore, and he didn’t do the best job of hiding it.

The concert, T-Pain no doubt initiated, was designed to be more of a sprint than a marathon. Bundling his biggest hits into a compact medley toward the show’s midpoint, he nudged his setlist forward through little spastic bursts, going full-forced at some points and easing into cruise control at others.

The result was a knee-deep summary of the artist’s accomplishments, one that could either be construed as a nod to loyal T-Pain followers or a concise introductory tour through his repertoire.

This abbreviated setlist may have simultaneously satisfied both of these duties, but for the concertgoer at large looking to let the experience simmer overnight, the immediate pleasures to be derived from the performance felt undercooked.

T-Pain kicked the hour off with a mixed bag of raps, including the laughably direct “Booty Wurk (One Cheek At a Time).” It’s hard to imagine reciting the song’s lyrics with a straight face, but the rapper’s undeterred confidence somehow made the track seem even more cartoonish, topping the mix off with a glob of autotune thick enough to swim in.

He did, however, revive the concert somewhat after the misstep, tapping into the crowd’s guilty nostalgia for 2000s radio with “Cyclone” and Kanye West’s “I’m Good.”

It was only a matter of time before T-Pain dove into the crowd-pleasers for the evening, and eventually, he delivered. Bouncing from one major career point to the other, the rapper responsibly dealt out fan favorites with everything from “Bartender” to “Buy U a Drank (Shawty Snappin’).”

Stuffed into about fifteen minutes, the rapid-fire assortment was the part of the show that people had come to see. “Buy U a Drank,” surprisingly, allowed T-Pain some room to roll out the smoother, more melodic side of his singing voice. Even the gloating, simplistic “Dan Bilzerian” ushered in a relatively brighter, catchier vibe to the performance early on in its second half.

Transitions, however, were ultimately the show’s crutch. The set, though ecstatic at moments, was bogged down by lengthy, unexplained lulls between songs, stopping T-Pain’s momentum cold. The rapper’s reliable DJ did his best to fill in the gaps with whirs and sound effects, and in a few cases, brief yet soulful orchestrations, which were somewhat enough to suspend the concert’s atmosphere in the interim.

Still, not much during T-Pain’s awkward silences could keep the crowd’s interest from spiraling into a freefall.

By the show’s end, the artist had begun to piggyback on the featured credits from his past rather than his original tracks, dancing around clips from Flo Rida’s “Low” and DJ Khaled’s “All I Do Is Win.”

The encore, a tongue-in-cheek take on The Lonely Island’s comedic “I’m On a Boat,” came and went in the blink of an eye, almost as if T-Pain had poked his head back onto the stage after walking off and handing out a spare line or two as leftovers.

“We got what we got, we don’t need the rest / Can turn this parking lot into a party,” he sang earlier in “Up Down.”

T-Pain might not have a lot of trouble starting up the party, but on Sunday, it was a struggle to keep it going.