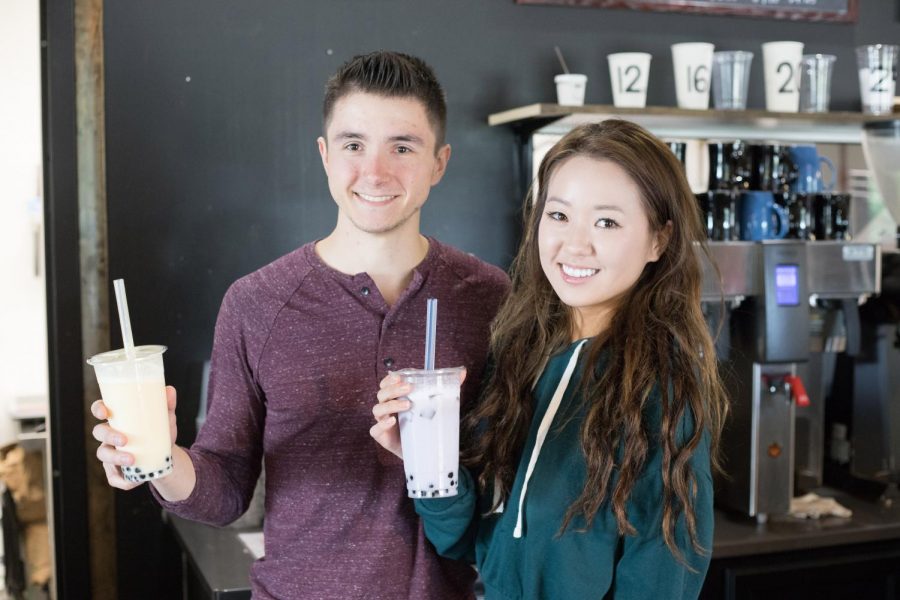 Christine Ahn is a junior in ACES. She also co-owns Hammerhead Coffee, located at 608 E. University Ave. in Champaign, with her fiance, Ryne Thiel.

At 19 and 23 years old respectively, they reached out to Hammerhead’s previous owner over the summer. The deal went through to purchase the coffee shop and they have been running it on their own since mid-July.

Ahn said that when her fiance visited her over the summer, she was showing him around Champaign when they stopped for coffee at Hammerhead. Ahn told him it was her favorite place to study when, suddenly, he proposed the idea of buying the establishment.

“He was just like, ‘What if we just buy it out and then you can be the owner of Hammerhead?’ So that same day we contacted the owner and we worked out a deal,” Ahn said.

Ahn wanted to be an entrepreneur from an early age, and the moment this opportunity presented itself, she said it was everything she wanted.

She also said that when she was younger, she ran her own sterling silver business, so taking this next step to a brick-and-mortar business seemed natural to her.

Thiel has been an entrepreneur for the past five years, so he felt comfortable making this next step in his professional life as well. He said he had an epiphany, so-to-speak, about a dream of owning a coffee shop. After seeing Hammerhead, he wasted no time making this dream come true.

Thiel said he was looking for a place to run close to where his fiancee was living, and he thought Hammerhead was by far the most aesthetically pleasing. He also loved that it used high-quality beans to make coffee.

“I saw a lot of potential, so I pretty much cold-called the owner, Todd, and I’m like, ‘Dude, let me cut you a deal,’ and 30 minutes later we made a deal,” Thiel said. “It was pretty spontaneous — I wanted to buy the place, so I did.”

When Thiel was 17, he started his first company called Cavetech LLC, which developed websites for clients who didn’t know how to write code. He spent much of his childhood behind a computer and has always enjoyed writing code, whether it was for pleasure or for business.

Thiel, with previous knowledge of running a company, found Hammerhead’s foundation perfect to build off of and to continue to grow over time. He said the previous owner had not anticipated the amount of work cultivating a coffee business would be, especially because he was also busy with other side businesses.

“His execution didn’t quite work out, but what his plans were, it was going in the right direction,” Thiel said. “I just wanted to buy it so that I could make it into what it is that I see it being in the future.”

Nathan Kim, Ahn’s friend and an employee at Hammerhead, wanted to help Ahn, and he found Hammerhead to be a great place to work. He said he and Ahn had experience in the service industry together, as they used to work at a sushi restaurant.

Kim said that for anyone working at a new company or business, it’s important to remain open to changes and to be patient with new management. When an establishment is growing, it’s hard to perfect things right away.

Ahn and Thiel have already implemented several changes to Hammerhead that have made significant improvements to their success, like extending the shop’s hours to 12 a.m. each night and bringing Taiyaki, a popular dessert in Japan that is hard to find in America, to Hammerhead.

They also changed how they make their pastries, which are now made in-house.

With a history of baking and plenty of family recipes, Ahn started from scratch and began making all of their baked goods. Her favorite: the butter cake — a delicious, decadent and sweet pastry that pairs perfectly with Hammerhead’s coffee. Now, the only thing not made in-house is the Taiyaki.

After a few months of new ownership, Ahn said their profits have almost doubled since the turnover.

“I have a student’s perspective, so I know exactly what I wanted when I came here to study, and then now I can implement those changes into the actual business,” Ahn said. “I’ve always loved baking and cooking … Now that I’m doing what I love, it doesn’t feel like I’m going to work.”