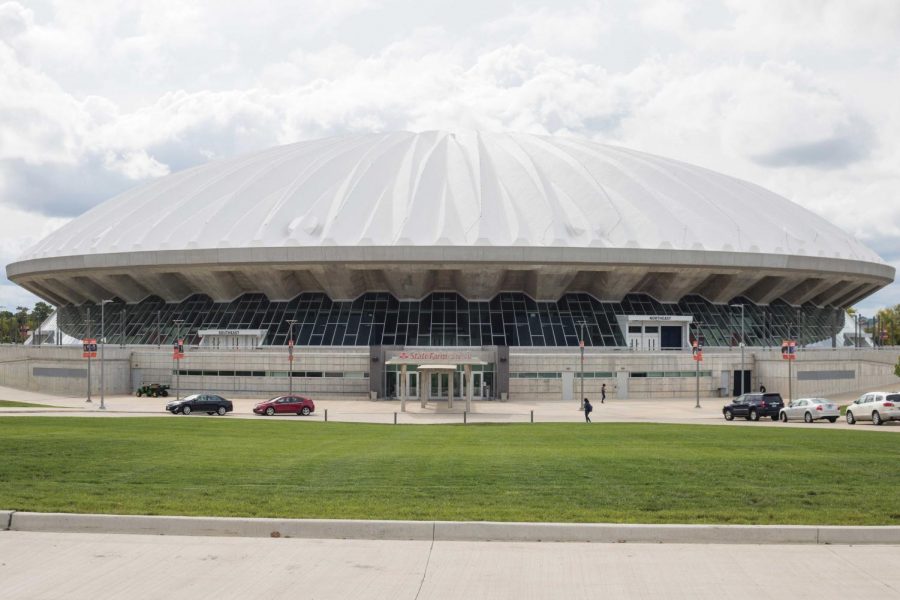 When students think of Broadway productions, they don’t always think of Champaign-Urbana. However, the State Farm Center offers them the opportunity to enjoy what Broadway has to offer with its annual Broadway Series.

Throughout the school year, the State Farm Center will host four Broadway shows, featuring productions such as “Something Rotten!,” “Cinderella”, “Kinky Boots” and “Finding Neverland.”

Megan Laz, marketing coordinator for the State Farm Center, said these shows are genuine Broadway productions by professional actors. She said it’s important to note all four shows have been on Broadway.

“It’s their touring production, so it’s not kind of, as we say, a ‘Mom and Pop’ like pop-up,” said Laz. “These are prestigious, prominent plays and entertainment that we’re bringing into the community.”

The first show, “Something Rotten!,” takes place in 1595 and is about two brothers who set out to create the first musical ever during the era of Shakespeare. It’s the newest of the shows, premiering on Broadway in 2015.

“Cinderella” however, is a family show for the holidays about the classic fairy tale, but with a contemporary twist. Laz said the production even features some newer songs that aren’t seen in the classic film.

Kicking off the spring semester, “Kinky Boots” is about a man struggling to continue his father’s shoe business when a singer comes into the store looking for some new shoes. It fetures songs by famous singer Cyndi Lauper.

Lastly, “Finding Neverland” is the story behind the classic tale of Peter Pan. It is about the playwright J.M. Barrie, who finds inspiration from a widowed, ill mother and her four sons.

Laz says the show she is most excited for is “Something Rotten!” because it is the newest of all the shows, and this is one of the first touring productions of the musical.

“It’s something brand new,” Laz said. “I think it will be interesting to see the story take on these two brothers who  are trying to compete in playwriting with Shakespeare, set in 1595.”

Emma Anderson, junior in FAA, describes having the shows here on campus as a very unique experience for University students.

“It’s a really special and unique experience to have these professional productions of Broadway shows so close to campus,” Anderson said. “A lot of these shows, especially this season at State Farm are Tony award-winning shows, and (the fact) we have them is really awesome.”

Anderson explained what’s especially great about these productions is their proximity to campus.

“It gives students a chance to see these high profile shows without making a trek to Chicago,” Anderson said. “It is a really great opportunity.”

Tickets for the shows range from $39 to $65 plus fees. Students, however, get an $8 discount for tickets.

Laz said these shows are a great opportunity for community members to seek out.

“It cements our commitment … to bring diverse programming to the State Farm Center,” Laz said. “This is an opportunity for the Champaign-Urbana community and the University community alike to get some culture.”