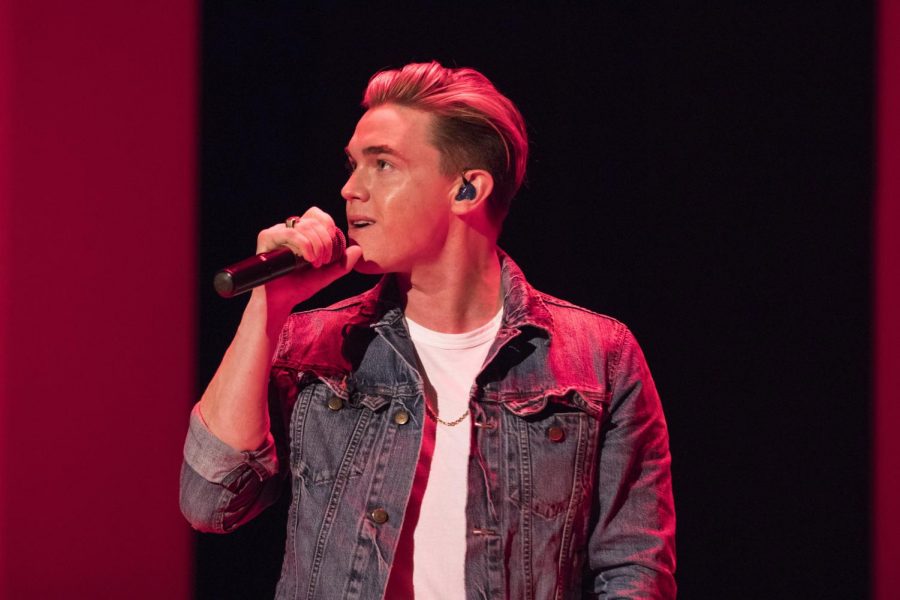 On Saturday, the lights on the dome of Foellinger Auditorium shone brightly, signaling a special event taking place inside. It wasn’t just any face who graced the stage. It was teen heartthrob of the early 2000s himself, Jesse McCartney.

Fans began arriving for the concert once the doors opened at 6:30 p.m., but those who wanted more than a viewing from the audience purchased VIP meet and greet tickets for the chance to snap a picture with McCartney before the performance.

McCartney was brought to campus by Star Course, a subsidiary of the State Farm Center and a University group which focuses on bringing artists to campus to promote student engagement.

“The middle agent that booked Jesse for us had been pushing Jesse since, like, last year because he’s actually the number one-selling college concert performer right now,” said Reilly McGuire, senior in LAS and one of Star Course’s senior managers.

Claudia Johnson, senior in LAS and the other senior manager of Star Course, said a middle agent is someone who helps Star Course communicate with an artist in order to bring them to campus, although the senior managers have never met this agent.

McGuire said that this show in particular is a unique opportunity for the students involved in Star Course because they are able to experience organizing a meet and greet as well as a TV interview by a local news outlet in addition to the performance itself.

Throughout the process of bringing McCartney to campus, Johnson has learned about what it takes to put together events like these, but she has also learned a little bit about the artist himself.

McCartney requested through his team that Fiji Water and sugar-free Red Bull be provided for him, Johnson said.

“He’s very healthy, I do know that,” Johnson said. “Like, all of the snacks we have to get are like RXBARs and stuff. Like, very very healthy.”

Johnson said that Star Course’s hospitality manager is responsible for ensuring that these requests are met for the day of the performance.

Between songs, McCartney would sip from a can of the sugar-free Red Bull he requested.

Leyla Razo, sophomore in LAS and member of Star Course, was working at the event on Saturday. She said she enjoyed people’s reactions after they discovered McCartney was coming to campus.

“Seeing people’s face light up when you tell them, like, ‘Oh, we’re bringing Jesse McCartney; they thought we were lying,” Razo said.

Razo herself is also a big fan of McCartney’s and said she knows all the words to every song he’s written.

Former Illini Media Company employee Aaron Navarro, who works as a DJ on campus, opened for McCartney. Navarro has previously opened for artists like Waka Flocka Flame and T-Pain when they performed at the University, McGuire said.

Once McCartney sauntered onto the stage, the crowd cheered in a way that only ‘90s kids could muster. Audience members quickly made their way to the small area of standing room in front of the stage to get an up-close-and-personal view of the singer.

After opening with “She’s No You,” McCartney entertained his fans with old and new music, even serenading an audience member, a student in Engineering, with a cover of a Robin Thicke song.

The 31-year-old pop star even revealed to audience members that he, in fact, wrote the song “Bleeding Love,” which was originally released in 2007 by Leona Lewis, and sang his own rendition of it for fans that night.

The smallest shimmy of McCartney’s shoulders would send audience members into a screaming frenzy.

“Security is really important at Foellinger, just because it’s a really old building,” McGuire said. “We have to be super careful.”

McGuire also said that Star Course’s general members serve as security personnel on the day of any show, and this was the case for McCartney. The general members receive training on security procedures throughout the school year and also go through training the day of the performance, McGuire said.

For McCartney’s show, no extra security was hired, and the general members were responsible for keeping aisles clear and other precautions.

As far as ticket sales for the show went, Johnson said they were great.

“(It was) definitely one of the fastest selling shows we’ve had at Star Course,” Johnson said.

The crowd was not convinced that the show was over after McCartney’s false exit, chanting, “Beautiful Soul, Beautiful Soul” because the star had not performed this, one of his most recognizable songs, before walking offstage.

He didn’t keep the crowd waiting for long, coming back out for his encore and asking the audience if they wanted to take it “all the way back” before giving the crowd what they wanted and performing the title track from his 2004 debut album.

The amount of excitement for McCartney’s show exceeded Johnson’s expectations.

“I mean, the goal is always to sell out,” Johnson said. “It’s not something we do often ‘cause that’s not really the goal of Star Course. It’s not to make money; it’s for student engagement.”