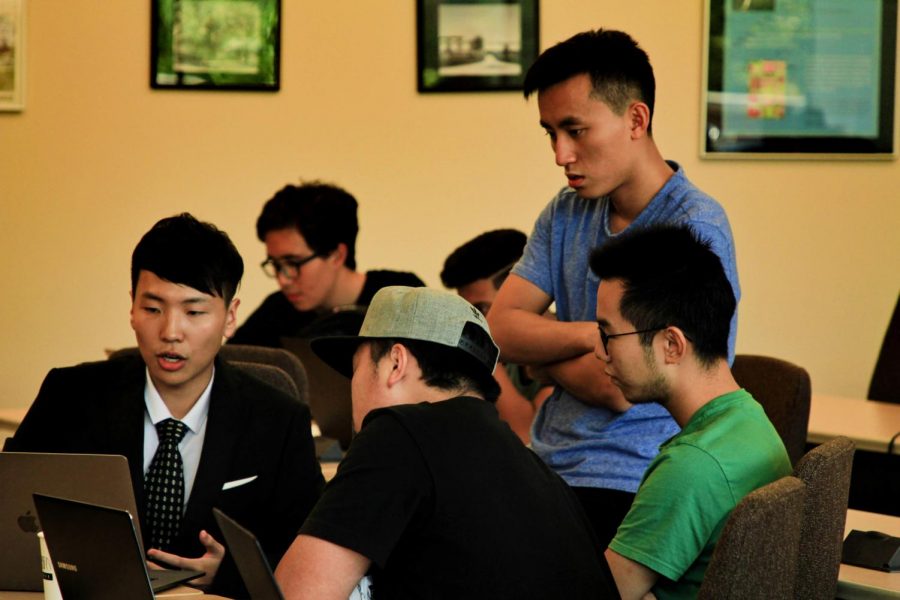 Students discussed with team members during the annual 54 event. “54" is a three-day event providing a platform for budding entrepreneurs, sponsored by Founders.

After finishing dinner at the Siebel Center, students filed into a lecture hall friday night. While waiting to begin, they talked with each other about their ideas and the teams they were hoping to form that night. This was the beginning of 54’s pitch fest.

Several hundred students gathered together to participate in the sixth-annual “54,” a three-day event that provides a platform for budding entrepreneurs. The event is sponsored by Founders, a group focused on helping startups on campus.

“We help startups go from not existing, from being just ideas in people’s heads, to actually go and get funding,” said Patrick Fang, senior in ACES. Fang is Founder’s treasurer and the co-director for 54 this year.

The event begins with a keynote speaker. This is followed by the pitch fest. Students have 60 seconds to pitch their idea in front of the rest of the participants. They talk about the problem they are trying to solve and the people they need to solve it. Teams are then assembled based on who is interested in which startup.

On Sunday, each team presents its startup to a panel of judges. The top three teams are given funding and are invited to a networking dinner with mentors directly following the event.

Shivani Gupta, senior in Engineering and an adviser for 54 this year, said anyone can participate in 54. She said they do not want to discriminate based on major.

All they are looking for are people who are passionate about problems in the world, Gupta said.

“They want to solve that, and they’re looking for other people that can unite with a common mission,” she said.

In past years, Gupta was a member of Founders, and co-directed 54. Since then, she has limited her participation in the organization and now only advises the operations of 54.

She said the process of running an event like this is rewarding.

“I just get so inspired by people’s passion and them dedicating a whole weekend to solve whatever (the) problem is that they’re trying to solve.”

Fang said they find three kinds of people typically show up. First, there are people with an idea who do not necessarily have all the technical skills. Second, people with those skills arrive, who are interested in entrepreneurship and want to work on their own trying to solve problems. Third, people who are interested in interacting with members of Founders, other entrepreneurs or mentors participate.

“The people who come to these kinds of events do tend to end up being the ones that have really successful startups in the future,” Fang said.

Fang said 54 is the first step of a pipeline for startups established by Founders. After 54, students can go through the discovery team that helps them find resources and mentors on campus. After the discovery team, they are pipelined through to the micro-grants team, which Fang described as a “mini Shark Tank.”

However, not everyone believes in the benefit of pipeline programs.

“Learning that it’s not going to be so systematic and codified when it gets to the real world and that it’s going to take investing a lot into yourself, I think that’s the most important part,” said Patryk Swietek, senior in Business and member of Founders.

Swietek and Viktor Makarskyy, senior in LAS, and their team presented an augmented reality startup, originally proposed by Makarskyy last year. They did not win any of the top places, yet they continued to pursue their idea.

Although they did not win 54, Makarskyy and Swietek found their third co-founder at 54 that year for their current business, Menu3.

They participated in other competitions with Menu3 and were selected to participate in the iVenture Accelerator.

Menu3 is an augmented reality app centralized around the restaurant business. Its goal is for customers to preview a restaurant’s menu items, such as plating and portion size, before arriving at the establishment through augmented reality.

Now, they hope to expand the company to Chicago by next semester.

Swietek believes that winning a competition is not always the most valuable part of participating in one.

“I don’t think people should get too caught up with winning,” Swietek said. “54 does its due diligence in terms of the people you meet and the mentors you meet.”

His co-founder has a similar mentality.

“Your first step when you have an idea isn’t, say, to inspire an investor to put in money. It’s to inspire team members to follow your passion” Makarskyy said.

54 tries to provide this platform to people. Even if they fail, 54 continues to provide resources for students.

This year, Fang said the theme of the event was “anti-fragile.”

“These are the class of systems objects and items that become stronger with stressors,” he said. “For entrepreneurs, that’s the same thing. People need to be anti-fragile.”