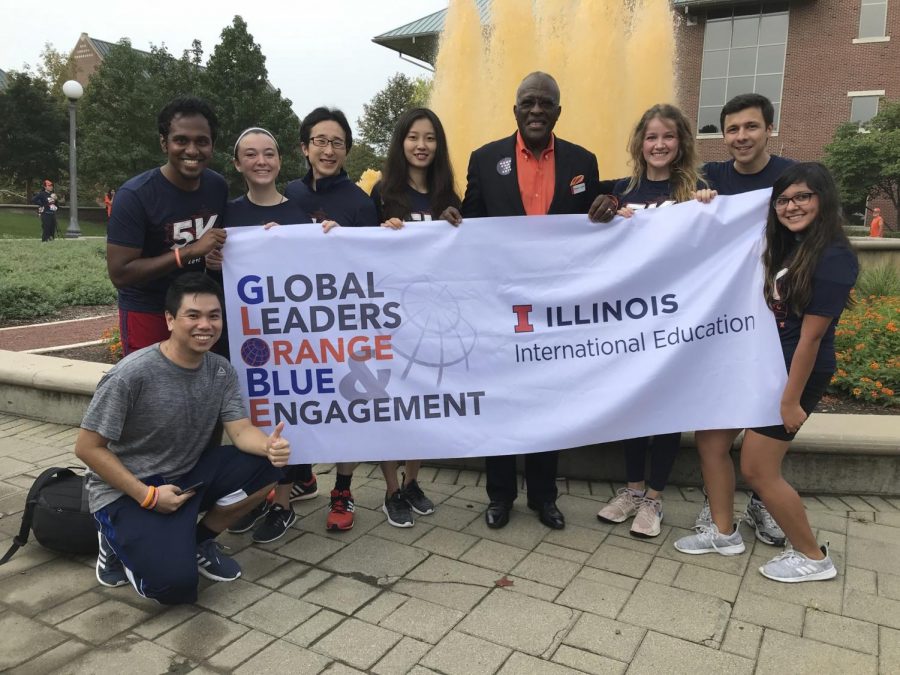 She hopes to educate students on what GLOBE is all about and what GLOBE students can accomplish.

“GLOBE is designed to provide the opportunity for our International and Domestic Students to engage in a semester-long interaction,” Yun Shi said.

GLOBE was initiated in the fall of 2015. The program itself is completely volunteer-based, and there is no credit given.

The GLOBE program is looking for more Blue, or domestic, members to accommodate their overwhelming amount of Orange international students.

Current domestic Blue GLOBE member Kinan Sawar has now started his fourth semester in the GLOBE program. Sawar was born in St. Louis and mentioned the term “connector,” which is often used when speaking about GLOBE members.

“The thing that really fascinates me in the philosophy around GLOBE (is) the idea of being a connector,” Sawar said. “The most successful blue and orange students have a connector quality within themselves. I was really bad about integrating people in my group, but with GLOBE, people become more vulnerable and it has become a lot easier.”

Six semesters after the initiation of GLOBE, the program usually has anywhere from 800 to 1,000 students apply. These students are put through a competitive application process and there are often over 500 people on the waitlist to apply.

“In order to become a member, since it is very competitive, we have the students submit their applications online. The Blue members are current University students, both domestic and international, and the Orange members are the incoming international students,” Shi said.

Apart from the application process and the craziness surrounding it, GLOBE has a very simple goal — to bring domestic and international students together.

“GLOBE has helped me immerse myself successfully in the American campus life and make new friends. But the best reward is getting to show everyone else, my new friends, my own culture,” said Vera Vasileva, graduate student at the University.

In all of GLOBE’s events, host members evoke a feeling of immersion into the cultures they’re featuring. In the fall, there is the Japanese festival called Matsuri, the Chinese Moon Festival, Diwali and the Russian National Ballet Theatre, Vasileva said.

All of these events are hugely important, both for the GLOBE members and non-members.

Like any type of student, from any background, it can be hard to make friends and find people who enjoy the same things that you like. This was the case for Renato Azevedo, a GLOBE member from Brazil.

“I find it difficult as an incoming or an existing student to find people who are interested in the collective sports such as volleyball, soccer and basketball,” Azevedo said. “GLOBE offers this structure that you start meeting people from your cohort or from different ones, and it gives a structure and it helps get through that initial challenge of meeting people.”

Every month it is required to have a GLOBE-sponsored event.

“We have events during summer and fall breaks, where we play sports together and cook together while educating each other on their own cultures,” Vasileva said.

Some events that GLOBE has hosted include ice skating, sightseeing and, just recently on the 14th of October, the group hosted their Amazing Race. This is a massive scavenger hunt the groups and cohorts participate in.

Besides all the events and different activities, the core of GLOBE is the same and has been from the beginning. These events just make it even more enjoyable for both the Orange and Blue members.

“Students from different parts of the world really start to develop an appreciation of each others’ culture and begin to have a world perspective,” Yun Shi said.