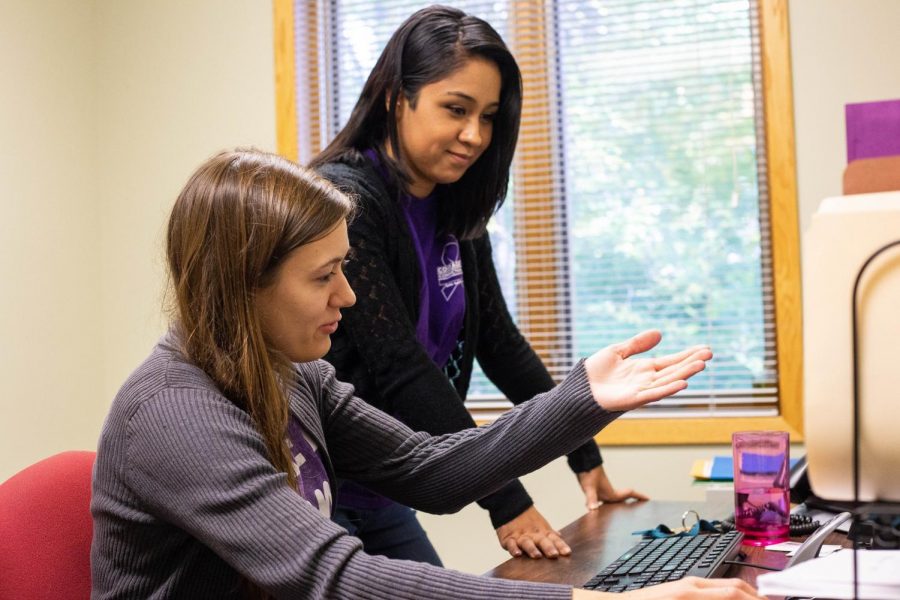 Rachel Buchler and Stephanie Corrales working at the Courage Connection office in Urbana on Nov. 6, 2018.

Founded in 1971, the first domestic violence hotline in the nation was established in Champaign, Illinois, under the name of A Woman’s Place.

However, as a part of their mission to constantly identify and address the growing and changing needs in the community, the organization has branched out and worked to protect any person in need of establishing self-sufficiency.

Since then it has been renamed Courage Connection and has been acting as a safe space for not only women but anyone such as men, transgenders and people who are gender fluid in the community.

Griffiths said that there is nothing someone can do to deserve domestic violence.

“Domestic violence is a pattern of behavior that erodes the control someone has in their own life,” Griffiths said.” It is too easy to say what were you drinking or what were you wearing or what did you do to make him angry. The reality is there is nothing you can do to deserve to be treated in a way that is a crime.”

Courage Connection is not simply a safe place that houses people as many may think when hearing the words “domestic violence shelter.” The organization supports clients by helping them be independent and self-sufficient for the long term.

The crucial part is for the clients to identify what they need, then the organization will connect the clients with resources to meet those needs.

Court advocacy is one of the central services they offer. This helps clients understand their rights, and what actions need to be taken. It also teaches them how to work with the police and jurisdiction to ensure that protection is honored. There are often times when the system does not follow through and the orders of protection or restraining orders are not honored.

“The court system was protecting the legal system, instead of people that the legal system exists to protect. If they are not forced, it is just a sheet of paper,” said Griffiths. “It is really important for everyone providing services and support for survivors and victims that all of those pieces work correctly and on time. The right response truly can save lives.”

Griffiths said there are several ways students can support the organization. This includes fundraising, holding drives for the wish lists on the Courage Connection website and by inviting Courage Connection to talk to social groups.

It is always important to listen to the victim in need, said Griffiths.

“When someone tells you that something awful has happened to them, believe her. Don’t blame her Don’t shame her. Let her know there is a place she can go for help,” Griffiths said.

One of the services of Courage Connection is providing housing for homeless individuals and families in general.

Rachel Buchler, the Housing coordinator, serves the entirety of the Champaign County Continuum of Care. Her job is to work with anyone who is homeless from their victims of domestic violence to batterers.

Buchler’s work is not just finding people places to stay but making sure the people can stay in housing. She makes sure their income qualifies, aids with getting all the correct documents and helps people find out what they look for in a place.

“I am working with someone who has never had a budget in their life or never had a positive relationship with a bank, but it’s all things they want to work on,” Buchler said. “A lot of things we take for granted and the skills that we grew up with, most of the clients are learning these for the first time.”

Courage Connection also has services available for friends and family of victims of domestic violence, or those who are simply curious about what a healthy relationship looks like. There are even support groups and services available in Spanish.

“There are a lot of people who speak Spanish out there, but the thing is they don’t reach out to services because one they don’t speak the language, they don’t know what is out there. Some people are afraid of reaching out because of their legal status,” said Stephanie Corrales, the Spanish speaking advocate at Courage Connection.

The job of Corrales overlaps with many services of the organization. She helps each client step by step, depending on what they need support. This could be opening a bank account, applying for legal assistance or even buying a bus ticket. Her goal is to help with what she can and refer the clients to the right resources.

“To take care of one client, you have to work with a bunch of other organizations to work together,” Corrales said.

One out of three women in society are victims of domestic violence in their lifetime and people who are most at risk are between the ages of 18 and 24, the age range of a majority of the population on campus.

“Our goal is to end domestic violence one life at a time,” Griffiths said. “For that, we need the whole community to know what it is and to say it’s not okay. Be outraged when it happens and protect those who are hurt.”