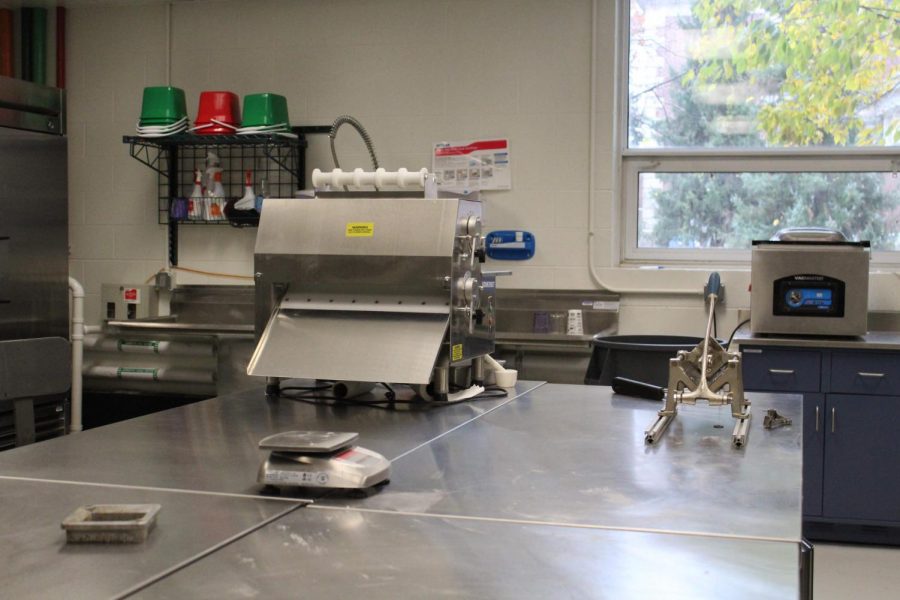 The newly remodeled Food Science Pilot Processing Plant on Tuesday. Students and staff use the plant to teach and develop, conduct research and process food products to be used by the University dining halls and other companies.

Past the McFarland Bell Tower at the end of South Quad is the Agricultural Engineering Sciences Building. From the exterior, the long brick building seems like any building on campus. But inside, students and staff are meticulously developing and processing mass quantities of food products to be exported to dining halls and other companies.

This is the newly renovated Department of Food Science and Human Nutrition’s Pilot Processing Plant.

Officially opened in September, the plant underwent an extensive $6.5 million renovation over the last five years. Brian Jacobson, assistant director of the bioprocessing pilot plant operation, oversaw and helped plan much of the renovation.

Of the total budget, $3 million was spent on new equipment alone, with funding from the Student Sustainability Committee, the College of ACES, the FSHN department, private donations and fundraisers.

Jacobson said the plant is a hub for teaching, research and community outreach. Most of the ingredients it uses come from the Sustainable Student Farm, and the products it creates go to the dining halls.

This partnership with the FSHN department, the Department of Crop Sciences and University Dining is part of the Illinois Sustainable Food Project, an effort to increase farm-to-table food options within dining.

The plant supplies all the pizza sauce served in dining halls with the tomatoes harvested over the summer from the Sustainable Student Farm. This past summer, they made 700 gallons of pizza sauce from 32,000 pounds of tomatoes. University Dining is already almost out of the pizza sauce they provided.

For the Harry Potter-themed Halloween dinner at the dining halls, student interns researched, developed and tested 20 different versions of Butterbeer for a month under the supervision of Jedi Brown, food service administrator.

“We spent the last month developing the recipe using some inspiration from online and from books and pictures to come up with a recipe for that,” Brown said.

Jessie Yang, sophomore in ACES and aspiring food scientist, conducted both the research and the testing.

“We try to get the color right,” Yang said. “We also research a bunch of other recipes online and then we make those recipes the same way to see how similar we could get it to the movie or at Universal (Studios). Then, we just go there from adjusting that, using various extracts and cream and different sodas to get the right consistency, taste and color.”

Student interns’ work varies depending on their field of expertise. Gage Adams, senior in ACES, focuses more on the plant’s operational and mechanical processes. He believes the interdisciplinary nature of the plant is positive and reflective of the industry.

Various companies also reach out to the plant for product development, ingredient swaps or process industrialization. Jacobson said this is because the plant is a “bridge from academia to industry.”

However, the plant does not outsource its own products to companies for liability reasons, only to dining halls and Bevier Hall. Student interns are still able to work on contracted products for companies so long as they sign and adhere to the nondisclosure agreements.

Jacobson said the current model reflects their mission as a teaching and research facility.

“We want to be able to do some full-scale processing,” he said. “But it just makes sense to partner with campus where (the students) can see how it’s grown, how it’s processed and actually eat our own product within the confinement of the University.”

Currently, the plant is looking to process and recipe test pumpkins. Jacobson describes the plant as a “value-add type of facility” by transforming raw ingredients into digestible and palatable food products. The raw pumpkin will be turned into a puree to be added to cookies, bread and muffins.

After harvest season, the plant will focus on making hot sauce out of fermented hot peppers and jams and jellies out of chokeberries. The plant also plans to make a cold juice line out of the chokeberries to initially be placed in a cold juice dispensary in a dining hall and to eventually be sold in 16-ounce plastic bottles at University Dining convenience stores.

For the future, Jacobson hopes to bring in smaller student food startups to the plant for advice on food processing or business. The students behind Gnokara, a gnocchi-inspired dish made from okara, won second place at the Institute of Food Technologists this past year after being developed at the plant.

As the plant focuses on the projects ahead, Jacobson and Brown hope to grow their products, projects and student involvement.

“We’ve spent the past five to seven years building the facility, the infrastructure,” Jacobson said. “Now, we’re going to work on building the program, and the program is always going to involve getting more students involved.”