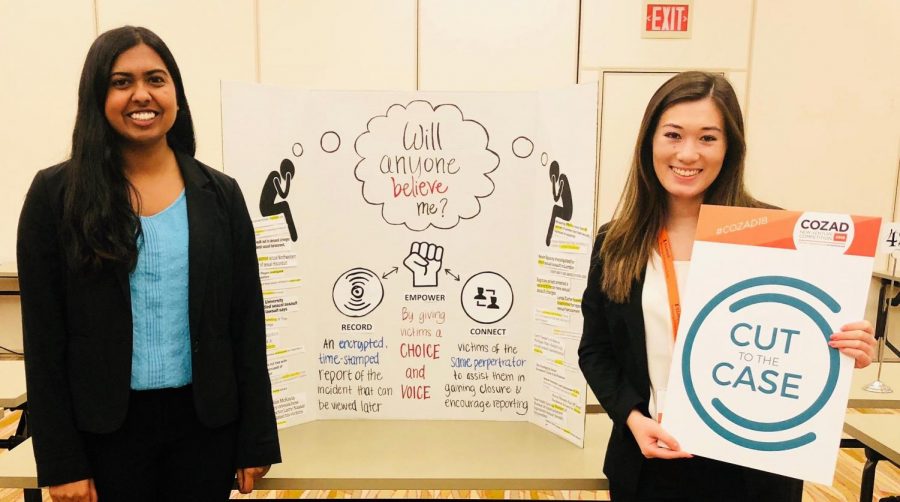 Premika Pandian, left, and Kendall Furbee, right, stand in front of their presentation at the Cozad New Venture Competition at the University in April. Their start-up, Cut to the Case, received a prize of $5,000 for Social Innovation at the competition with their creation of an online platform that would crowd-source crime reports to increase campus safety.

For eight weeks in the summer of 2016, they were visiting technologically deprived communities and hosting educational sessions for MakerGirl, a University-based startup. MakerGirl is a nonprofit that encourages young women, ages 7 to 10, to explore careers in science, technology, engineering and math.

As their whistle-stop tour of the country progressed, so did their desire to work on something their own.

“Over the whole trip, we became more and more confident in our own abilities,” Pandian said. “We wanted to work on something that was ours. We kept talking about it.”

She said they wanted to tackle an issue both of them were passionate about and also impacted the lives of others — that was safety.

Furbee and Pandian started with an idea for a campus safety app that would crowdsource crime reports.

However, in the summer of 2017 after receiving guidance from some other entrepreneurs, they narrowed their scope and doubled down on exclusively improving the process of sexual assault investigations.

It resulted in the creation of Cut to the Case in May 2017, an online platform focused on increasing reporting of sexual assault crimes by breaking down barriers that prevent survivors from coming forward.

Recently, in April, they received a $5,000 prize for social innovation at the Cozad New Venture Competition hosted by the University.

According to the Bureau of Justice Statistics, two out of three sexual assaults in the United States go unreported. On college campuses, only 20 percent of sexual violence survivors report to law enforcement.

“Our hope is that by creating another option for reporting, where (survivors) can do so from behind their computer screens, they’ll report on our platform earlier,” Furbee said. “And then, the report will be supplemental when they choose to report to the police or the University.”

She said the platform aims to empower sexual assault survivors and bring perpetrators of the attacks to justice.

If survivors choose to file a report on their website, which is still under construction, they have the option to anonymously or openly provide a narrative account of their experience. Pandian said the website will also provide information about community resources that can assist survivors with getting medical help and mitigating post-trauma.

Furbee has been working closely with the University of Illinois Police Department and Rape Advocacy, Counseling & Education Services to carefully design the platform.

With help from Detective Sergeant Gene Moore of the University of Illinois Police department, she is trying to augment the reporting process with questions that could support future investigations.

Moore has been with UIPD for 18 years. He also serves as the in-charge of the Special Victims Unit. Before assuming his current role, he was a sex crimes investigator for the department.

While other anonymous reporting methods exist — either through the UIPD itself or the Title IX Office — Moore believes Cut to the Case could provide a better alternative. For those reluctant to file an official report, the online platform can serve as a way to “warehouse the story,” he said.

Even though the seasoned investigator appreciates the purpose an online reporting system can serve, Moore confesses he still prefers some old-fashioned methods.

“There’s always going to be that human element that you’ve missed because of not listening to the person’s voice or seeing their emotions,” he said when asked about the shortcomings of the platform.

Moore said it’s also impossible to truly gauge how the trauma has affected the survivor from a written account. He voiced concerns about how the platform would be implemented.

The co-founders of Cut to the Case have been working with the University’s iVenture Accelerator to develop strategies for a practical, long-term solution since May 2017.

iVenture is a 50-week program for student entrepreneurs that sprouted from a course about community problems in the School of Social Work in 2015. Every summer, a few selected startups receive $10,000 in seed funding — for which the University does not take any equity — while the founders receive a stipend of $2,500 to cover summer expenses.

Students in the program also have the opportunity to learn from esteemed entrepreneurs. Once the summer is over, student fellows have to enroll in a seminar course in entrepreneurship to continue their learning about early-stage startups.

Pandian said the first 10 weeks — the most rigorous weeks — helped them create a business plan for Cut to the Case, and decide which direction they wanted to take their platform. Currently, the social startup is pivoting toward a nonprofit route.

“In cases like that of Cut to the Case, the value to society outweighs a serious revenue model,” said Manu Edakara, director of the iVenture Accelerator.

He said there’s a scarcity of resources available for social ventures, but Furbee and Pandian have shown considerable foresight into tackling the issue by developing innovative software.

In addition to resolving some security and tracking issues, the organization also has to crack how to sustain operating costs without a fixed revenue stream, Furbee said.

With Pandian graduating this winter and moving to San Francisco, Furbee will be taking the lead on future projects.

In Furbee’s experience of balancing running a business with a heavy academic workload, she feels the College of Engineering is not very supportive of entrepreneurship when your major isn’t correlated with your business. She said navigating school becomes even harder when you’re learning more while running your business than in class.

Edakara, class of 2015 University alumnus, also works individually with students to assist them with goal-setting and big-picture planning. He asserts on a professional level, being a student entrepreneur is a whole different ball game.

“It’s not like you’re getting an accounting degree;  studying for four years and doing the interviews, getting internships and getting a job,” Edakara said. “Like, ‘Hey, I’m trying to create a career out of essentially nothing here.’”

While Furbee would like to work on Cut to the Case full-time after she graduates, she is currently focused on building relationships with all the stakeholders involved  — law enforcement, the University and, of course, the survivors.

The organization is also exploring disseminating information about its platform through official University channels and also through student organizations, Pandian said.

But its effectiveness remains to be seen. A pilot program is tentatively scheduled for the start of the next school year.

“We’re not necessarily trying to profit off this issue,” Pandian said. “Since it’s such a huge social problem, tackling one aspect of it isn’t going to be enough. It takes an entire societal change to change the structure, but we’re hoping that even just this tiny part can help at least some people and maybe that will trigger some kind of a reaction.”