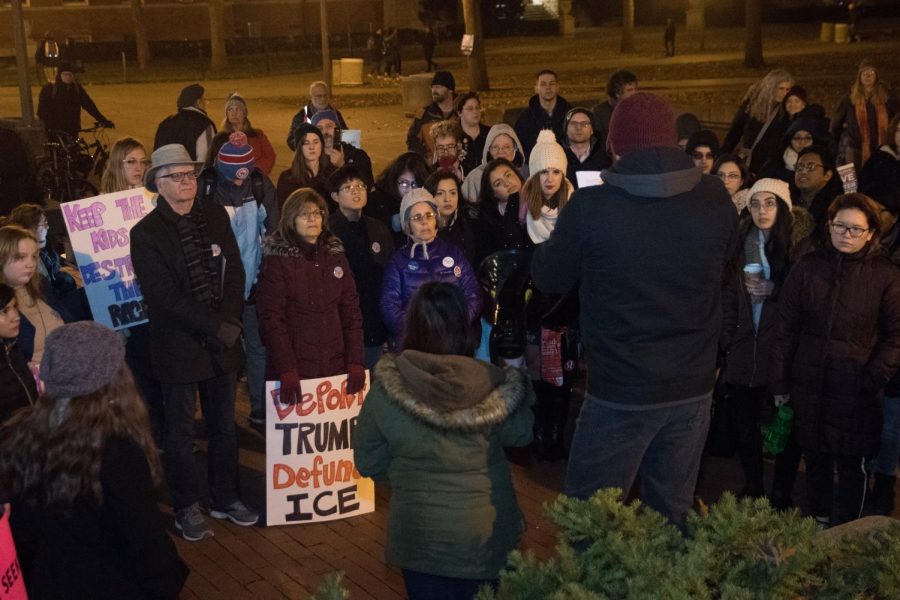 Students rally on the Main Quad in opposition to the treatment of the migrant caravan on Nov. 29. Activist groups like UIUC Ayuda encourage students to get involved in important causes. It was formed as a result of recent events in the Latinx community.

In the midst of recent events such as the migrant caravan, policies perceived as threats to human rights have caused many University students to make their voices heard through activist groups such as UIUC Ayuda.

UIUC Ayuda is a campaign program that holds rallies, protests and fundraisers to support recent events that particularly affect citizens in Latin America and the Latinx community.

Jocelyne Robledo, 2018 graduate from the College of LAS and current career counselor at local Champaign high schools, was one of the two founders of UIUC Ayuda last year.

“(UIUC Ayuda) was in response to natural disasters in Mexico and Puerto Rico,” Robledo said.

She said she was at La Casa Cultural Latina when someone spoke with the director at the time, Dr. Gioconda Guerra-Pérez, to make a plan to take action. Since Robledo likes to organize, she began to plan with the girl, who came up with the name UIUC Ayuda.

Since UIUC Ayuda has activist roots, there is a strong belief in protests, rallies and other political pressures to create change. However, Robledo said the campaign is also about the practical side of raising money to actually help people survive.

“We raised $15,000 last year and sent four boxes of donated supplies — half to Mexico and half to Puerto Rico,” Robledo said.

“It was a campaign that took off last year, and after they raised the money, they sort of went into hiatus,” Kuhl said.

She said she had been personally following the migrant caravan and wanted to do something on campus to show solidarity and raise money and supplies, which is what created the idea for the rally held on Nov. 29 at the Union.

“I reached out to basically all of the organizations on campus that do social justice work. A lot of people responded and were interested and wanted to participate,” Kuhl said.

She said the group met at least twice a week and struggled to organize a rally because of the group’s limited experience.

Rubab Abbas, junior in LAS, joined UIUC Ayuda around this time to help Kuhl with the issues of the migrant caravan.

“My favorite part about it is honestly doing the planning with everyone,” Abbas said. “At one point at Carolina’s house, we were listening to music, playing with her cat and making lists of things that need to get done and tangible ways to assist folks already at the U.S.-Mexico border.”

With the help of people who had done activist work before, the goal of this second installment was to make it a continuous effort that other students could look to if they wanted to continue humanitarian or natural disaster work, Kuhl said.

Robledo said although this year has been a smaller effort, there are a lot of people involved in fundraising for organizations that do the groundwork.

Migrants and asylum seekers face issues of political and economic violence, as well as LGBTQ issues, including an LGBTQ caravan fleeing countries as a result of misogyny and gender discrimination, Robledo said.

“It’s all intertwined. It’s just a matter of what we’re choosing to focus on at the moment,” she said.

UIUC Ayuda has been able to form as a result of other campus organizations that co-sponsor the campaign, such as some Latinx sororities and fraternities and activist groups like MEChA, Robledo said.

MEChA stands for Movimiento Estudiantil Chicanx de Aztlan and has been around since the 1960s but on campus since 2005. It has been involved in campaigns such as the Boycott Divestment and Sanction campaign against Israel. It also played a big role in the minority course requirement proposal for the University, Robledo said.

Similarly, Kuhl helped found the Central American United Student Association, or CAUSA, which is an organization that provides students the opportunity to discuss history and culture.

“We’re the first group  in the Midwest of Central Americans in college,” Kuhl said. “There’s a lack of representation, so we wanted that space in order to be amongst each other and learn from each other.”

Overall, both Kuhl and Robledo seemed to feel there is a lack of action being taken from students.

“People need to stop being performative on social media,” Kuhl said. “People have to do things, take action, and make sure that they’re using their privilege for the right reasons.”

Similarly, though donating money is appreciated, Robledo said people often use charity and money donations to make themselves feel better when that is really the bare minimum.

“Educating people is a good step forward,” Kuhl said. “We did have a ‘teach in’ in regards to what started the caravan and what factors cause people to migrate to the border and how it’s affecting people.”

It is most important to actually listen to the words of the people in the center of everything: those in the migrant caravan, Robledo said.

“They’ve released news on the rally, and I read their demands because I wanted people to actually get what they’re saying instead of reinterpreting it,” Robledo said. “What they’re calling for is the dismantling of borders not just physically, but ideologically.”

Robledo said we should actually be looking to the people in the migrant caravan as examples since they are risking everything in search of a better life.

“We can do a lot more of that in our own lives,” Robledo said. “Whether we’re talking about dismantling the borders between the C-U community and campus or economic inequality, or the borders between people who can access higher education or not. There’s a lot of different ways you can interpret that.”

Similarly, Robledo said activism can mean a lot of things and can be implemented in any job or aspect of life.

“Doing activism is more so just believing that you can set your mind to something and organize it and do it rather than waiting on certain political systems or structures to do it for you,” she said.

Though taking action through UIUC Ayuda’s events is most encouraged, educating oneself and others is a simple and essential part of the process, Kuhl said. Since people have so much access to information on their phones, taking the time just to read about something is a good step forward.

“I’m glad people came out to the rally because they’re going to take this message home and spread it,” Kuhl said. “And I know they will.”