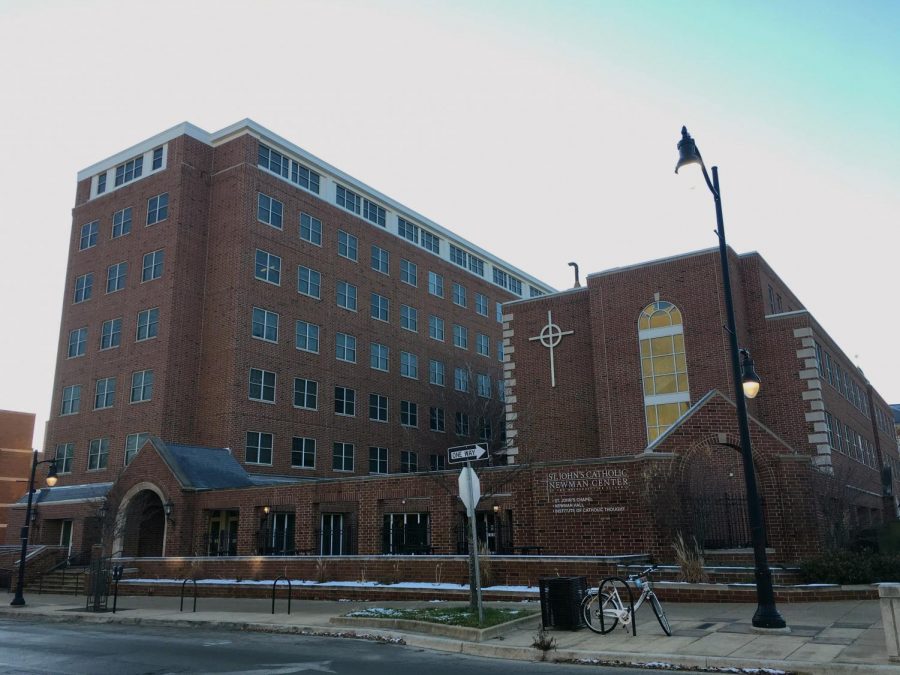 Newman Hall located on Sixth and Armory. The private residence hall is home to the Newman Shares program for University and Parkland students.

In fall 2013, Newman Shares Food Pantry program was founded to help students from the University and Parkland College who struggle to put food on the table.

The Newman Shares program is located in the social hall of St. John’s Catholic Newman Center and is open every Wednesday night from 5-6:30 p.m. with the help of student volunteers. The program sources its food from the Eastern Illinois Foodbank, which currently serves 18 different counties in eastern Illinois and is the primary source for 167 agencies including food pantries, soup kitchens and a variety of food supplying programs.

When discussing the issue of food insecurity, people typically do not think of college students as being impacted. However, Sister Mary Rachel, a member of the pastoral staff at the Newman Center involved with Catholic Illini Service and the Newman Shares Food Pantry, describes the struggles some students face.

“Especially for graduate students, spending money can be tight,” Sr. Mary Rachel said. “The program can be a huge help for students to take some of that burden off.”

Thomas Bane, senior in LAS, has been a volunteer at Newman Shares for a little over a year.

“Volunteering opened my eyes to how different some people’s paths here are and how the normal college stressors, like studying for exams, aren’t everything they have to worry about,” Bane said. “College is already difficult enough; it was hard for me to imagine adding on the worry of where I’m going to get my next meal on top of that.”

Students can come to the Newman Center on Wednesdays if they are interested in volunteering. There are currently seven volunteers, but there are still positions available. Duties vary each week, but volunteers typically fill bags with food, reorganize and stock shelves or assist with the program’s overall operations.

“(There is) a list of the food we have available, so when the student comes, they can circle the food items they want, and a volunteer will be the one to go into the food pantry and gather the food and put it in a bag for the customer,” Sr. Mary Rachel said.

Although the program is small right now, they have been trying to spread awareness through advertising around campus to increase student involvement. The number of people who come by the pantry varies from week to week, but Bane said the amount of students who come in will range from just a couple to more than 10.

“It makes you feel like you’re making a difference and hopefully lightening the load on people’s shoulders,” Bane said.

The Newman Shares program is unique in the fact their their food pantry serves college students, specifically. There are a variety of food pantries in the Champaign-Urbana area that don’t specifically target this demographic.

Craig Gundersen, professor in ACES, has been on campus for the past 10 years conducting research on the causes and consequences of food insecurity and evaluation on food assistance programs with an emphasis on Supplemental Nutrition Assistance Program (SNAP) services.

“In the Champaign area, the groups most in danger of being food insecure are people with disabilities, single parent households and people with very low incomes,” Gundersen said.

Gundersen’s research has shown SNAP leads to major reductions in food insecurity rates. Having college students who are in need participate in SNAP would be very helpful to them, along with going to food pantries, like Newman Shares.