‘The Hate U Give’ author Angie Thomas promotes activism, empathy 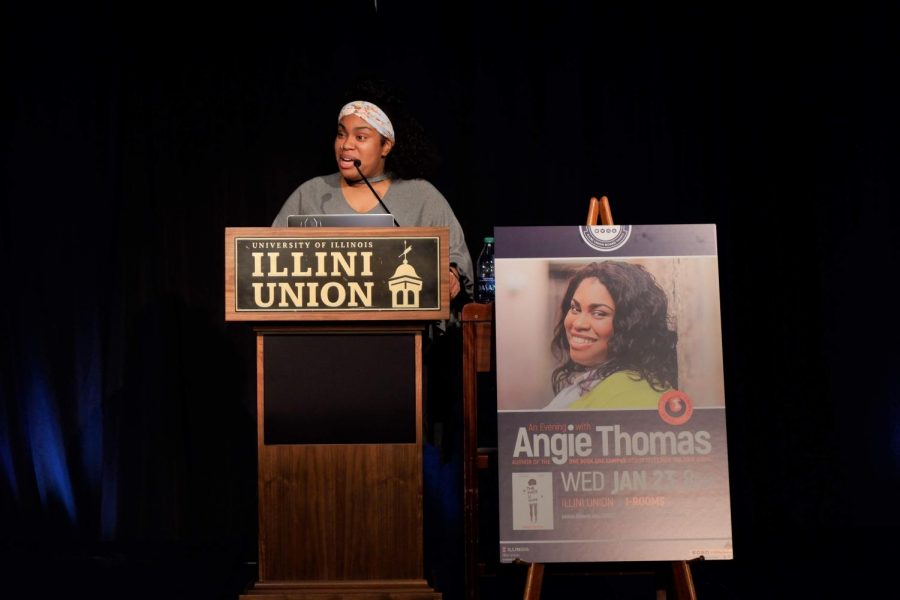 Angie Thomas, author of The Hate U Give, speaks at the Illini Union on Jan. 23.

In early October, the best-selling novel “The Hate U Give” premiered as a major motion picture. On Wednesday, the author of the novel, Angie Thomas, visited the Illini Union to give a lecture on her inspirations for the novel and her aspirations for changing the world.

Every year, the One Book One Campus program committee nominates several books it believes should be shared with the campus. The chancellor then selects the final book from the list. This year, “The Hate U Give” was chosen.

Dixita Limbachia, senior in Media, has been a member of this committee in the past.

“One Book One Campus is kind of like a culmination of different people on campus that just have a passion for reading,” Limbachia said.

Limbachia helped nominate “The Hate U Give” when she was working on the committee last year. She said the committee considers many factors when forming its list.

The committee members shared which books they had read resonated with them, she said, looking to the New York Times Best Sellers List for inspiration. They also factor in the cost of bringing the author to campus and when the author is available to give a lecture. They then, of course, consider what books would resonate with the campus audience.

Throughout the year, events and programs were coordinated around this book. The program’s focus event was Thomas’ lecture she shared with students, faculty, staff and other community members.

The Illini Union Board helped to host this event. Tomas Baliutavicius, freshman in DGS, is the current director of enriching with the IUB, which puts him in charge of bringing speakers to campus.

Baliutavicius said he had high expectations for the lecture.

“Angie Thomas in general just has a very vivid personality,” he said.

Several students attended the event, some getting in line an hour and a half before the lecture started at 8 p.m. While waiting in line, they were able to purchase a copy of the book with Thomas’ signature inside.

Erica Gardner, senior in LAS, said she had read snippets of the book but had not yet seen the movie. She said she was excited to listen to Thomas speak.

“I think it’s a good conversation starter for people who aren’t aware of the prevalent issues going on in today’s society,” Gardner said. “I’m glad that there is a program like this on U of I’s campus where it pushes the opportunity for students that go here to read such good books.”

Arij Virani, freshman in LAS, said she is a big fan of the book. She has read the book multiple times and she was first in line to see the movie, she said. She described seeing Thomas in real life as a celebrity sighting.

Virani said she thought the book was relevant to campus. She also said it was eye-opening to see how so many different people across the University could all read the same book.

“It’s just, like, a way to bring the campus together,” Virani said.

Once all the attendees were seated inside, Baliutavicius introduced Thomas to the stage, listing Thomas’ achievements and summarizing the book.

“The Hate U Give” centers around Starr, a young black girl straddling two very different lives. The plot begins when Starr witnesses her childhood friend, Khalil, being shot by a police officer.

Thomas’ lecture began by talking about three figures who inspired her writing: Emmett Till, Tupac Amaru Shakur and Oscar Grant. She shared with the audience how these men taught her about racism, hip-hop, activism and empathy.

She said when she was younger, she did not connect with books because she could not see herself in them.

“I saw myself in hip-hop,” she said. “Hip-hop scared people, though, because it was so raw and it’s so raw when it’s usually speaking the truth … isn’t that the heart of activism?”

Thomas spoke seriously about the difficulties she faced while she attended a primarily white, upper-class, conservative college in Mississippi. She also inserted humor in her lecture, making the audience laugh when she said, “You cannot Milly Rock to ‘Sweet Home Alabama.’”

She talked about “code-switching,” which she describes as being two separate people between home and college. Thomas said her experience balancing two worlds inspired the character of Starr in many ways.

When she was writing her novel, Thomas said she was not thinking of lofty political ideals, but about the kids in her neighborhood in Jackson, Mississippi. She said she wrote for kids who do not see stories about people like them, so they hate reading.

“As a writer, I personally believe that books are one of the best ways to create empathy and make people aware of things beyond themselves and issues in other people’s lives,” Thomas said.