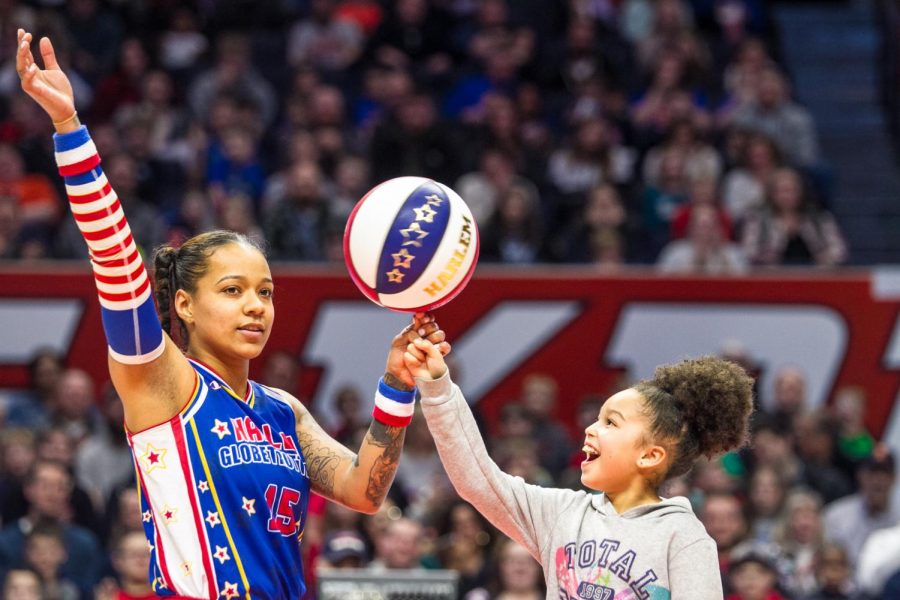 Number 15 on the Harlem Globetrotters, “Ice” shows a participant from the crowd how to spin a basketball.

Editor’s Note: A previous version of this story included sources without their last names. The sources were removed in order to maintain transparency. The Daily Illini regrets the error.

On Friday night, the Harlem Globetrotters made their way through snow and freezing temperatures to the State Farm Center, which was full of supportive fans who came to watch them play against the Washington Generals.

The youthful, fun loving group generated tons of laughs from the audience. Like all Harlem Globetrotters games, it was an impressive performance filled with silly humor that caught everyone by surprise. They got even the oldest audiences members laughing.

The event formally began with a choir from a local school singing a song followed by the Globetrotters mascot, Globie, playing some games with children from the audience. Finally, the game kicked off right after the choir sang the national anthem.

Throughout the performance, the team introduced new tricks, each wackier than the last. They sprayed water on the audience, danced with the audience, cracked jokes all while maintaining a narrative.

Even before the game began, the merchandise spot was packed with eager fans trying to pick up some souvenirs before the show. Signature Harlem Globetrotters basketballs, fun-sized basketballs for younger fans, jerseys, tee-shirts and plush toys were available.

The game began with a competitive jive from the Washington Generals coach, who promised to beat the Globetrotters just the way Ohio beat Illinois in football. This fired up the audience comprised of majority Globetrotters – and Illinois – fans.

A quick glance over the crowd presented audiences from a range of ages. While some University students showed up, a majority of the crowd was made up of families. Young children strutted around the State Farm Center, merchandise in hand.

During the breaks the open spaces around the eateries echoed with the dribble of basketballs. One could see small boys and girls trying to mimic some of the basic tricks the Globetrotters performed.

At half time the Globetrotters fans were satisfied with their lead over the Generals by a single point. The audience was entertained during the break by engaging in various activities and watching some short performances, one of which was a dance.

The Harlem Globetrotters bring such joy and light- hearted spirit in their acts, that the audience is compelled to play along. In breaks in between the game players would pull out certain members of the crowd to come onto the court and join the team in tricks.

While for some Friday night was about reliving childhood memories, for others it was all about fulfilling wishes. People from all over Illinois drove through the snow to see the Globetrotters perform.

Attending the game was more than just watching from the sidelines. The energy of the audience, the smell of hot dogs and popcorn in the air and the accompanying acts made the event a show that would stay in the mind of every audience member, young and old.