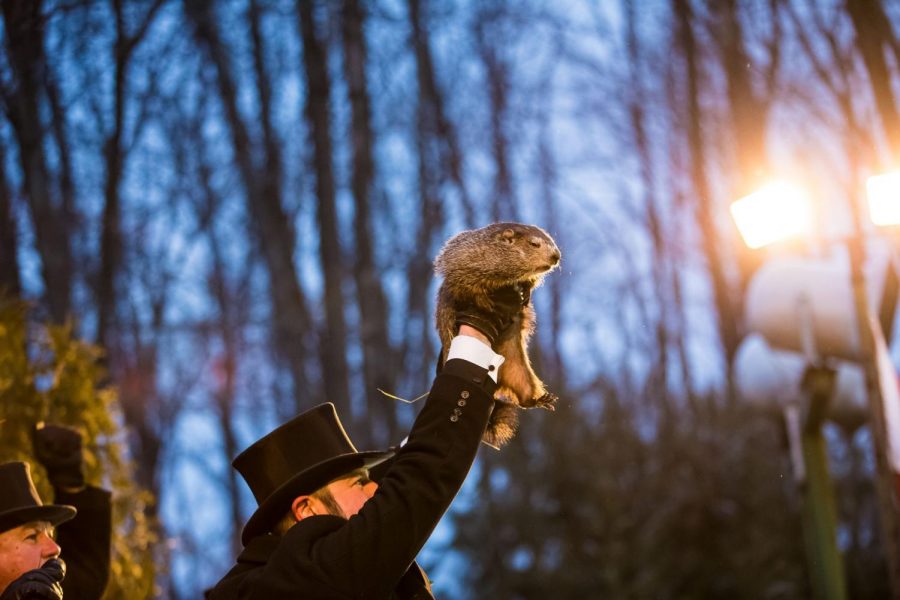 Punxsutawney Phil is raised into the air on Groundhog Day in Punxsutawney, Pennsylvania. According to ancient German traditions, if the groundhog comes out of his hole and does not see his shadow, spring will come early.

When you wake up in the morning and watch the weather on Saturday, would you trust a meteorologist or a groundhog? If you lived in Punxsutawney, Pennsylvania, your answer might be the groundhog.

If Phil the groundhog sees his shadow and returns to his hole on Groundhog Day, it is believed we will look forward to six more weeks of winter-like weather. However, if Phil does not see his shadow, it is believed that he has predicted an early spring.

Jeffrey Frame, professor in LAS, supports the celebration of Groundhog Day, but completely disregards the idea of the groundhog predicting our weather forecast.

“There have been a couple historical studies looking at Punxsutawney Phil. They’ve ranged his accuracy as anywhere between 30 and 45 percent going back to the 1960s. Is there anything scientifically accurate about the groundhog’s shadow? No,” Frame said.

Groundhog Day has its roots in the ancient Christian traditions of Candlemas. Candlemas is when clergy would bless and distribute candles needed for winter. Similar to the concept of Groundhog Day, the candles represented how long and cold the winter would be, according to History.com.

“When you first start school, like in kindergarten, you learn about Groundhog Day. You do coloring activities. I think we celebrated Groundhog Day probably until the sixth grade,” Paul said.

Paul said she grew up in a town where there is a big Pennsylvanian Dutch culture, which is where Groundhog Day started as a German holiday.

“It was brought to the United States through the PA Dutch. So where I live, there is a lot of Pennsylvanian Dutch,” Paul said. “If you didn’t learn about it in school, then you saw it on the news or through your grandparents. It’s basically another holiday at PA.”

Germans expanded this idea by selecting an animal, which was a hedgehog at the time, that would be able to predict the weather. Once they came to America, German settlers in Pennsylvania continued the tradition, although they switched from hedgehogs to groundhogs, according to History.com.

Groundhogs are native to the entire midwest, part of the northeastern United States and some areas of Canada. These locations range from New York City, New York, to Atlanta, Georgia.

Since Groundhog Day originated in Punxsutawney, it is enormously celebrated in Pennsylvania.

However, the reality of it is that this creature actually does not prove or give us an accurate prediction of our weather.

Paul agrees there is no correlation with the groundhog’s shadow and the weather.

“Especially with global warming, there is no way. Just because it sees its shadow doesn’t mean anything,” Paul said.