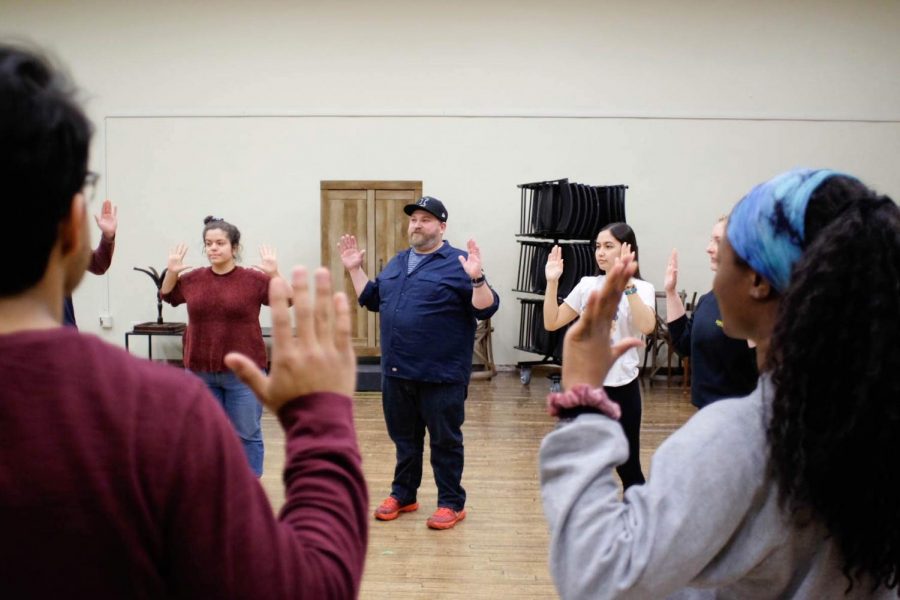 Actor and teacher Aaron Muñoz leads various activities with his class at the Krannert Center for Performing Arts on Friday. Muñoz began his acting career at age 15, after being encouraged by his teachers, and has been in many popular works such as “The Walking Dead” and “Stranger Things.” He inspires his students to be fearless and curious as they develop their acting skills.

Aaron Muñoz has starred in “Stranger Things” and “The Walking Dead.” He has been in films and plays and has also produced, written and directed various other creative works. Muñoz’s latest role is as an assistant professor in the University’s theater department, teaching THEA 275: Relationships in Acting II and senior showcase.

Muñoz has said the University already “really feels like home.” He said one of the reasons he came to the University is for the sense of connection and community.

“As a freelance artist, one of the things that you have is the ability to connect with a lot of different people; one of the things you lack as a freelance artist is a sense of community,” Muñoz said. “And I think plugging into the University of Illinois and the theater department here has given me a wonderful connection to not only the world at large but to a community of people, of young artists, who are learning what it means to be human beings and theater majors.”

Muñoz went on to praise the quality of the University’s theater program, which emphasizes students’ professional craft and personal character outside the classroom.

“You really need both to be a good person, and also committed and professional. I think this program really brings out both of that in a person,” Muñoz said.

Muñoz started acting at 15 years old after encouragement from teachers. He attended Columbia College in Chicago for more professional training and to pursue improvisation comedy.

“I did Second City, ImprovOlympic, then started to take classes in theater, started really really falling in love with plays,” he said. “I just really had that big theater drug and wanted more and more of it.”

Among all the wonderful things that come with being an actor, Muñoz said what he likes most is the ability to change.

“When I was young and doing day jobs to pay the bills, I couldn’t hold down jobs very well because I like changing,” Muñoz said. “As an actor, you get to do that. Every role you do is different. You could be doing Shakespeare, really in that world, and all of a sudden, to be doing a TV show with vampires. You are able to tell different stories.”

Charlee Amacher, sophomore in FAA, is Muñoz’s student. She recalled on the first day of class, Muñoz told them he didn’t care who they were outside of class, they can be whoever they want in this class, and that anything was open and valid.

She noticed the professor put “Fearless/Curious” under the course name on the first page of her syllabus, which has become a theme for the class.

“Whenever we do something massive, something different in this class, we usually take a moment to question which part of the activity made you feel fearless, and which part of the activity makes you curious,” Amacher said. “It’s basically like, strong pieces of an actor comes down to how fearless the actor is and how curious the actor is. To establish that you have that presence and power already, and just channel that into your theater work is basically what he’s all about. Just letting things happen and letting things go.”

Muñoz knows being an actor also means not always knowing where the next paycheck is coming from, countless auditions and fewer callbacks. But for him, the ability to tell stories and connect with different communities outweighs the instability of the profession.

Before moving to Nashville, Muñoz lived in Queens, New York City, for five years, which he said was the most diverse place in the United States at that time. He called New York “a grind just to live,” but is nonetheless grateful for his time there because it allowed him to meet all types of people and sharpened his skills in entertainment.

“What stood out for me about New York is the friendships, who were at the same place as you are. You are young, poor, scrapping things together, you have big dreams and everyone’s very supportive,” Muñoz said.

In addition to being an artist, Muñoz is also a traveler. After graduate school, he went backpacking for three months in Italy and one in Chile. He said traveling gives him new perspective and the opportunity to better understand the human experience, applicable to acting and life in general.

“Knowing and appreciating other people’s experience and points of view is one of the things that’s just a simple requirement of being an actor, “ he said, “but also a pretty amazing thing if you want to be a good human being.”

Besides his two young daughters, Muñoz said his proudest work so far is theater. “Lost Laughs” is a play he co-wrote and performed in that premiered last year, and “2 Households, 2 Assholes” is a two-person show where he and one other actor played all the characters from “Romeo and Juliet.”

On creating “Lost Laughs,” Muñoz said one of the things that was interesting to him was connecting to the world as someone who is funny but overweight, and how that affects one’s career. He wanted to highlight “this lost, amazing comedian” Fatty Arbuckle, the main character played by him in this comedy-tragedy, who mentored Charlie Chaplin and discovered Buster Keaton and Bob Hope.

Muñoz owns his own production company, Nashville Story Garden, which aims to bring artists together. Through the Greenhouse program, screenwriters, playwrights, spoken-word artists, people from the media and actors meet monthly to produce work without the pressure of auditions.

Many artists use the space as a sounding board, bouncing ideas off each other to figure out what works and what doesn’t.

Nashville Story Garden has produced award-winning podcasts, as well as plays and short films; it’s giving a platform to the new voices in Nashville who are creating, writing and producing original work.

Currently, Muñoz is directing the senior showcase at the University, where he uses his professional experience to help FAA students launch their careers after graduation.

“It’s really important at this point of my life to give back,” he said. “And I feel very lucky to be given the opportunity to be working as a professional actor, and that I want to pass down a lot of things I learned to others because that’s how I learned them, about the professionals.”

To his students, he tells them to “keep playing like a child and put in the work.”

In an email, Zoe Replinger, sophomore in FAA and Media, said Muñoz was knowledgeable, approachable, positive and “a force of nature.”

Replinger brought up two activities they have in Muñoz’s class. One is an ensemble-building exercise disguised as fun games, which aims to encourage students to be fearless and curious, as well as turning the class into “a trusting, empathetic ensemble.” The idea of an ensemble, according to her classmate Amacher, is essential to acting.

“My favorite is a modified form of volleyball. We attempt to string together as many consecutive hits of a small blue dodgeball as we can without letting it touch the floor. Today, we got to 112,” Replinger said. “On our first day, I think we barely made it to 20. Much of what we do is pure fun, but it’s also about saying yes to each other and taking care of each other. He makes us all care about each other so much.”

Anther activity Replinger mentioned is Cold Read Friday, where students are asked to do a monologue or scene that they are seeing for the first time that day. It is an important skill for actors and in real-life auditions they might have as little as five minutes to prepare for such tasks.

“By making us practice this in class with a knowledgeable coach, he is getting us ready for the industry,” she said. “We are very lucky to have him.”