Moving forward, looking back: 50 years of dance at Illinois 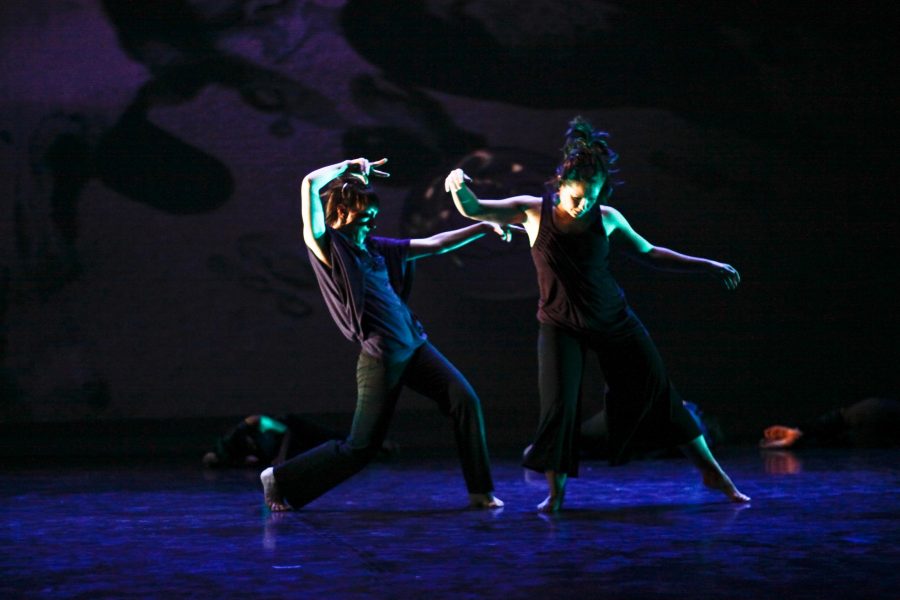 Dance students rehearse for February Dance, which has integrated technological advancements so the audience can interact with dancers. The show will be performed Thursday through Saturday at the Krannert Center for the Performing Arts.

As the University dance department celebrates its 50th anniversary, this month’s performances will commemorate the occasion with a central theme: moving forward and looking back.

Dance at Illinois puts on two annual performances each academic year, and this year’s festivities began back in November.

The November and February dances were choreographed and designed around the same time, early in the fall semester. Because the November performance was imminent, it initially got more studio time. However, the February performance was continuously rehearsed throughout the academic year.

Both performances are the product of collaborations between professors, alumni, graduate and undergraduate students.

“The point of these concerts is twofold,’’ said John Toenjes, associate professor and undergraduate director in FAA. ‘‘One is to make beautiful art and second is to involve our students in a meaningful experience where they can learn how to perform and learn how dances are created.’’

There are four different dances being performed. The dances are equal parts experimental, experiential and commemorative.

Toenjes worked with alumna Renata Sheppard for their piece ‘‘Patina.’’ This specific performance blends dancing with visual art by having the dancers use charcoal to draw on the floor in real-time.

Another piece,‘‘Tether,’’ calls for dancers to move both as a group and as individuals. It is the collaboration of Cynthia Oliver, professor and graduate director in FAA, and alumni Leslie Cuyjet, Jessica Pretty and Angie Pittman.

Endalyn Taylor, assistant professor in FAA, and alumna Raheim White aim to creatively celebrate all genders — with a focus on black women — in “Kueendom of the Shade.”

A tribute to Stevie Wonder will be performed in “I Wonder,” a performance that will showcase the messages of his music against the art of masculine dancing. C. Kemal Nance, assistant professor in FAA, worked closely with alumni Grant Hill, James Washington and White to create the piece.

Alumni are not typically involved in these performances once they graduate but given the impact of alumni on the program in its 50 years, it felt natural to bring them back for the celebration.

Bringing alumni to campus has not come without its challenges. They are traveling back and forth from their homes and places of work and some alumni live far away. In White’s case, she has been using Skype for rehearsals once a week since she cannot physically be there. Toenjes said that because of the technology issues, sometimes their practices have not been the most efficient.

White didn’t enjoy the Skype rehearsals because of the impersonal barrier that inherently comes with a screen.

“I didn’t know the dancers when I first started working with them and that is very difficult,” she said. “I jumped into the process focusing on the time that I would have with them physically. Once we worked in person and we continued video rehearsals, they were much more effective and productive.”

Lindsey Jennings, junior in FAA, has been frustrated by the technical issues with Skype rehearsals but said that, regardless, it has been really exciting to see the work come together.

Toenjes said this process can be “messy,” but that pieces sometimes don’t come together until before the performance. Despite the difficulties, he’s happy current students are getting the opportunity to connect with alumni and see what their own futures could look like.

“I know for the (undergraduate) students it is really great working with people (who) have graduated from this department,’’ he said. ‘‘They see that you actually can be successful with an Illinois dance education.”

Jennings has enjoyed meeting various alumni in the past two semesters. She said she loves adding them to her Dance at Illinois ‘‘family tree.’’

It can also be enjoyable for faculty to welcome back former students as well. Toenjes said it’s like they are ‘‘coming home.’’ For alumni, they are being asked to return to the place where they first seriously developed and refined their skills, which brings to mind the growth they have experienced as artists.

White described coming back to choreograph as coming full-circle.

Many of the alumni and professors have kept in contact and often work with one another on projects.

“You work with someone that has been a former mentor to you and with time and experiences and continued projects and collaboration, they become not only a mentor but also a collaborator,” White said.