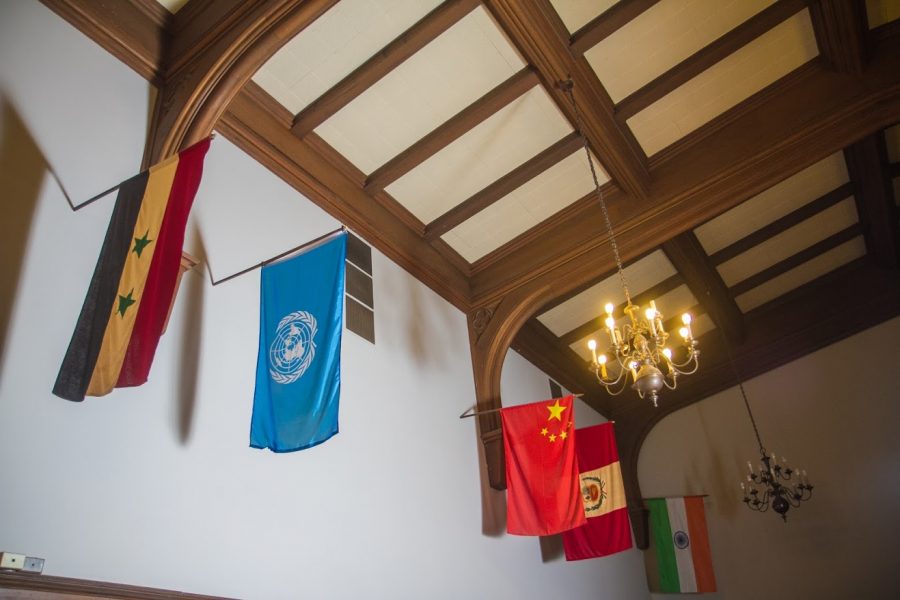 Flags of different countries hung up in the main room of the University YMCA building on Wednesday. The University is home to a number of international students who must learn to adjust to living in a new city in an unfamiliar country.

“I think Japan House is one of the most important reasons that I really like it here,” said Yang Du, graduate student in Education.

Campus life and living in a small town can be a lifestyle change for some students who come from larger urban areas. For Du, acclimating to campus was initially challenging but got better with time. Now, she said the area almost has everything she needs.

Du said the resources on campus are rich, citing the Counseling Center and the technology room in the Education Building as examples.

Academic advisers and professors have helped Du’s transition. Professors were especially helpful after the retirement of her adviser.

“After he is gone,” she said, “a lot of other professors, they are very helpful to reach out to me.”

Her research focuses on improving tests that evaluate the abilities of students, with a focus on technology.

“In my teaching, I realized that sometimes it’s very difficult to contract a very valid and reliable test,” Du said, speaking of her experience previously working as an English as a second language teacher.

Du is not the only student who finds the school’s academic environment enjoyable.

“I think it’s a university that has a lot of resources better than other universities that I have visited,” said Magical Zhang, freshman in Media. She mentioned RSOs, good faculty and library resources as examples.

Zhang said the campus area reminds her of where she grew up.

“In fact, I just lived in a city that (is) quite like Champaign, not so big, but is not a suburb,” she said.

While at first struggling with using the English language, Zhang said she improved over time.

“English is my second language,” she said. “So to just adapt to the brand new environment full of English is really a difficulty for me.”

Morgan Luo, freshman in Education, is satisfied with the University’s accommodations and processes for international students in particular. In fact, one of the reasons she chose the University was for its diversity.

Luo said she used to live in a larger city which is not very similar to Champaign. This has made it somewhat difficult to adjust to life in the area, but she said the large student population has helped her better transition to campus.

However, Zhang said she thinks the University could help facilitate more conversation between international and domestic students in order to create more cultural understanding.

Zhang also said there is not enough cultural knowledge about each other for both sets of students. She believes intercultural conversations can fix that.

“I think you should have more conversation between the international student and the native resident to just fill some cultural gaps because so many times we want to communicate with each other, but in the sense of humor or sense of something just went wrong,” she said.