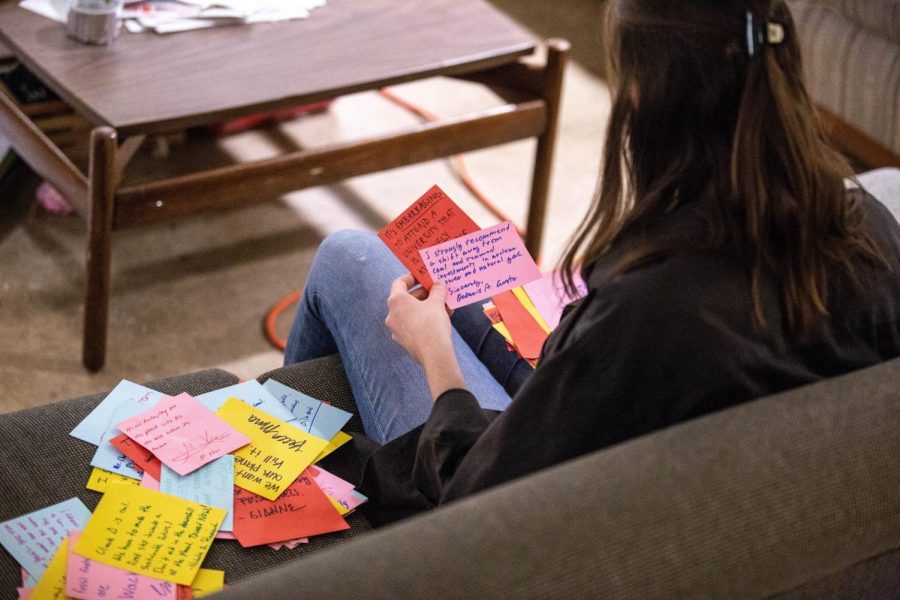 AnnaMae Dziallo, senior in ACES and president of Beyond Coal, sorts through letters from supportive students on Friday. Beyond Coal is an RSO at the forefront of the coal divestment movement, advocating for renewable resources such as solar, hydrological and geothermal energies.

Beyond Coal is an RSO advocating for the University’s divestment from the fossil fuel industry. It is part of a greater movement across campuses worldwide pushing for a future of renewable energy.

AnnaMae Dziallo, president of Beyond Coal and senior in ACES, has been the backbone of the campaign at the University since August 2018.

“The mission of Beyond Coal is to use collective action to align our sustainability values with our economic investments and finances,” she said. “By taking climate action, we aim to make it socially reprehensible and socially unethical for institutions, schools and legal bodies to have investments in the fossil fuel industry.”

Dziallo localizes the issue for students by putting what is at stake into perspective.

First founded in 2009, they have been on the forefront of the divestment movement. In 2013, Beyond Coal pushed through a student referendum, where the ballot showed 85 percent of students support coal divestment. In 2015, the Student Senate voted to divest from coal.

The next year, the Academic Senate, consisting of student and faculty members, voted to divest from coal; the same year, it pushed to create a committee, now called the Joint Advisory Committee on Investment, Licensing and Naming Rights. In 2017, that same committee advised the Chancellor to divest from coal mining and utility companies within the decade.

“We like to advertise our University as innovative and cutting-edge — and in a lot of aspects, we are — where in economic investments, we are not on the forefront,” Dziallo said.

The toxic air pollutants released by burning coal are a direct cause for respiratory illnesses, lung diseases and neurological and developmental damages in people working and living near areas where coal is burned.

“We’re a public university, so I don’t think we should be profiting and supporting industries that are creating public health crisis and environmental justice issues,” Dziallo said. “The issue is that the University is putting profits and economic incentives ahead of our morality, and that’s not even a compromise we have to make.”

Bugra Sahin, the vice president of Beyond Coal and junior in Engineering, said there are approximately 1,000 accidents per year from the chemicals pumped into rocks which seep into soil and water, destroying downstream communities, agriculture and biodiversity. Sahin suggests investing in renewable energy such as solar, hydrological or geothermal energies, citing renewable-energy countries like Denmark and Iceland as examples.

“The most promising renewable energy source is definitely the sun, which is for free,” Sahin said. “If we cover the Sahara Desert alone in solar panels, we’ll generate excessive energy to power the world. If we invest the same amount of money we do with fossil fuel into solar energy, it’s going to create the same amount of jobs.”

Multiple studies have shown investments in renewable energy are as economically viable, if not more, as fossil fuel investments. Dziallo pointed out the concept of stranded assets, which are coal, oil and gas, that we won’t be able to access as renewable energy becomes cheaper to extract.

Clark Bullard, an engineering professor and former director of the Conservation and Renewable Energy Policy Office at the Department of Energy during the Carter administration, suggests a national electric transmission grid allowing long-distance transmission of solar and wind power might be the future of energy for the United States.

Bullard gave a speech on behalf of Beyond Coal back in 2012. He pointed out the University should “teach by example,” and its duty to educate students is more important than its duty to maximize profits of investments.

“Its short-term profits versus long-term health, safety and welfare of citizens,” he said. “You want to set an example for students that maximizing profits is not always the best option; many other things can be more important: health, safety and clean environment.”

Bullard cites the University’s desire to “bury” Boneyard Creek many years ago as another example of academia needing to lead by example.

“(The faculty) said, ‘Is this what you want to teach engineers to think about streams?’” he said. “And I think the same thing applies with climate change.”

Bullard is devoted to creating energy-efficient appliances. He said investing in energy efficiency is more cost-effective than investing in photovoltaics, which use solar panels to generate electrical power. This could reduce the demand for coal.

“It’s not just about renewable energy; it’s about reducing demand,” he said. “Fifty years ago, the electric power demand was doubling every ten years, but all that stopped in 2006; now every year, the U.S. uses less electricity. There are plenty of opportunities in the future to allow us to shut down the coal plants for the next 10 years, probably.”

Beyond Coal is ramping up support on campus to show administrators students want to see money removed from fossil fuel companies and reinvested in green energy.

“Right now, we need student support,” Dziallo said. “We are currently in the process of figuring out the best strategy to show the student support on campus, whether it’s direct action, a sit-in, a demonstration on the (Main) Quad that harnesses attention.”

Dziallo said they will reach more students through social media outreach, campus events and meetings and phone bank sessions to the Board of Trustees.

Sahin asked students to consider where their tuition money is going and to use their voices.

“Only through collective action are we going to achieve any change, and the students have the power to enact whatever the vision they see the world as it should be,” she said. “The issues of racism, sexism, pollution, economic inequality — everything’s really connected.”

Editor’s Note: A previous version of this article stated that Beyond Coal was committed to coal divestment, when they have recently expanded their divestment efforts to all fossil fuels. It also stated that methane comes from coal burning, when in reality it comes from coal extraction. The Daily Illini regrets these errors.