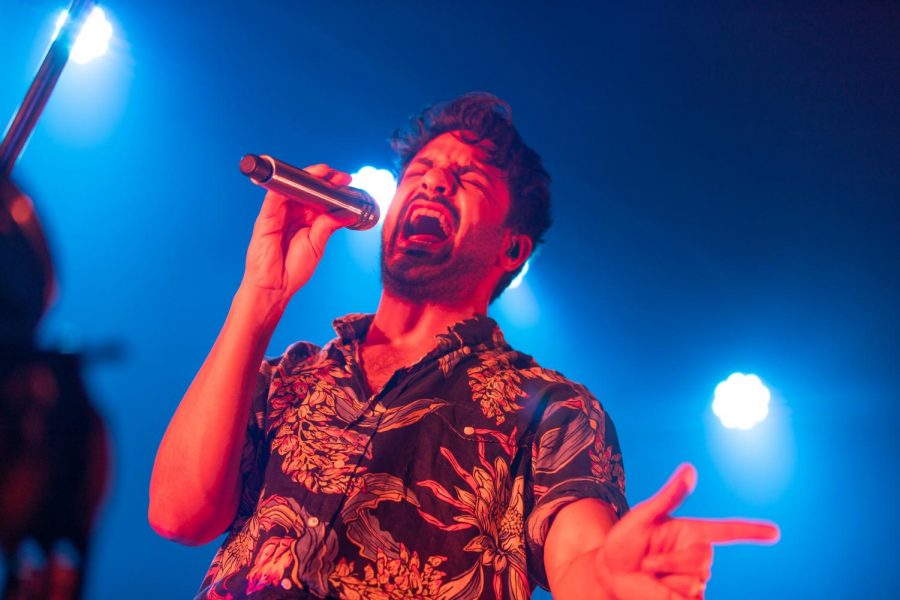 In cold temperatures and high winds, students, community members and even some out-of-towners queued up in a line that wrapped around the corner of The Canopy Club to see Young the Giant play Tuesday night.

Hundreds of people were in line, waiting patiently for their turn to find the perfect spot on The Canopy Club floor to enjoy and embrace the music. The popular alternative rock band performed for a sold-out crowd of lifelong fans and first-time listeners alike.

Young the Giant first performed in Urbana three years ago in a two-night concert event; it returned to the Canopy Club this year and brought out a large crowd of locals and fans willing to travel across state lines for a chance to experience an intimate concert with their favorite band.

Chandana Kamaraj, a senior at St. Louis University, has seen Young the Giant live five times. She, being a super-fan, said its sound and style is unique and can’t be found anywhere else in the current music scene. She is particularly moved by how the lyrics and harmonies of its songs speak to her.

“I really love how diverse the band is,” Kamaraj said. “Someone introduced them to me my freshman year, and I’ve been obsessed ever since. They’re my favorite band.”

Sure Sure, the indie band who opened the concert, played 40 minutes of its own original songs that kept the crowd engaged. It even had the crowd participate in a made-up dance to coordinate with its final song of the set entitled “Hands Up Head Down.”

After a brief intermission, Young the Giant took the stage to the sounds of cheers and excitement from its sold-out crowd.

The band released its album “Young the Giant” in 2011 and became best known for its alternative rock songs like “Cough Syrup,” “Apartment” and “My Body.” Since then, it has released three more full-studio albums and have remained a popular and admired band in the alternative rock community.

For Sacramento Chavez III, senior in ACES, being able to see his favorite band perform on campus again made his University experience full-circle.

“They’ve been my favorite band since I was in eighth grade and now, I’m a senior in college,” Chavez said. “The show was awesome; when (Gadhia) took my phone and started filming with it, it was the coolest thing.”

Chavez said the intimate setting of The Canopy Club allowed him to be up-close and personal with his all-time favorite band. This environment created an amazing and indescribable joy for Young the Giant attendees.

Audience members were particularly pleased when “Cough Syrup,” the band’s first hit song from their debut album, began playing mid-concert. The first note was enough to bring everyone together in a full-chorus, singing and dancing along.

This hit was followed by “Mind Over Matter,” the first single from Young the Giant’s second studio album of the same name. The audience was equally excited, singing along once again.

Young the Giant is known for its poetic lyricism and songs that encourage people to break free from what weighs people down in life.

During “Firelight,” Gadhia asked the audience to put up their lights once the drums kicked in.

He described to the audience the importance of not letting small things in life weigh you down and to let go of large burdens that may hold you back or cause you to mentally struggle in life.

The audience lit up the room with flashlights from their phones and swayed them to the beat as the song played.

For someone like Chavez, having these moments with a band that means so much to him is a great reward. He consistently looks to Young the Giant for positivity and a guiding voice as he continues through life.

“I just appreciate the genius of their lyrics, how they tell stories and how they just send positive messages throughout all of their music,” Chavez said.