Students gear up for Engineering Week 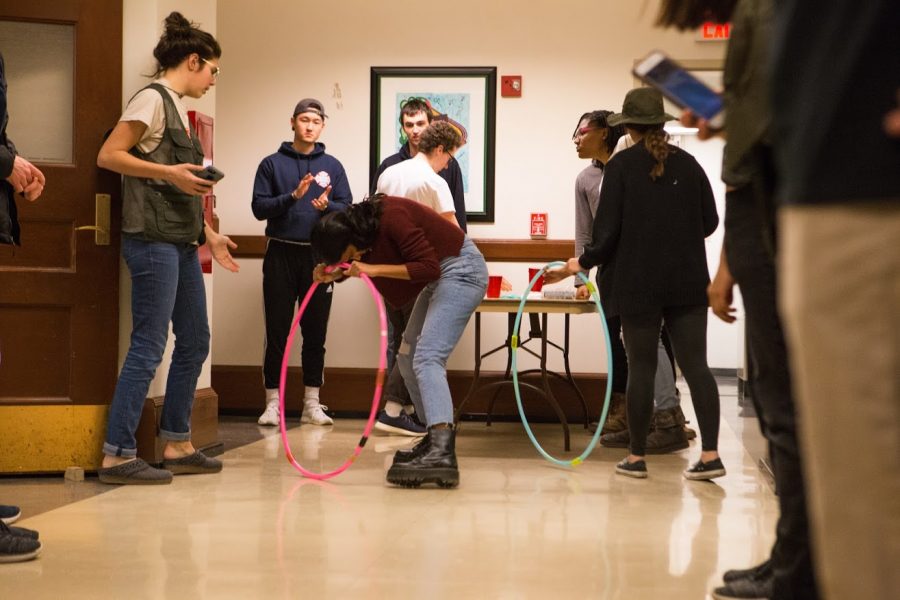 While many students are stressed during midterm season, the College of Engineering has planned Engineering Week, or EWEEK, for students. The eight-day event celebrates and encourages engineering students to apply their rigorous coursework in a fun setting, running Feb. 15 -Feb. 23.

Throughout the week, five-person and 10-person teams compete in activities like trivia, costume contests and tug of war. They earn points based on their finishes in events and team member attendance.

Arko Banik, senior in Engineering and director of EWEEK, said approximately 100 to 150 people attend each event either to participate or to cheer on their respective team. He is impressed by how the week’s festivities are able to bring different majors from within the college together.

“You’ll have pretty much all the engineering RSOs, they’ll submit some sort of a team and you’ll have, you know, (electrical and computer engineers) competing against the bioengineering department,” he said.

When he was a freshman on the Engineering freshman committee, Banik saw all the EWEEK events and wanted to get involved. He applied and joined the EWEEK committee. He began as marketing director his sophomore year, became events director his junior year and is now director of EWEEK his senior year.

Every EWEEK has a theme and this year’s is “Jurassic Park”. Some of the themes from years past were “Game of Thrones”, “Harry Potter”, “Star Wars” and “James Bond”. Every year they try to come up with new, fun events that match the theme.

Banik said one of the events is the dino kitchen crawl, inspired by the scene in the first “Jurassic Park” movie.

“So we’re going to set up a course you have to get through of pots and pans that are precariously perched and you have to make as little noise as possible so we’re using a decibel meter to measure the amount of noise made,” he said.

Paige Solcani, junior in Engineering and team captain of the American Society of Mechanical Engineers, participated in EWEEK as a freshman and is excited to lead her team as a junior. She wants to make sure her team members are attending and having fun.

“I just want everyone to have a good time because my team is mixed ranging from freshman to seniors,” Solcani said. “So obviously the seniors know a little bit more of the people and what’s going on, and I just want to make sure everyone has a good time and that we’re getting to these events and that we’re all putting the effort in.”

Solcani believes her team could place in the top five, but winning isn’t everything. EWEEK was a bonding experience for Solcani her freshman year, having met a lot of upperclassmen she otherwise wouldn’t have.

“Yes, there’s the aspect of competitiveness to them,” she said. “But you’re doing it with all your friends and it’s nice to do these things in an outside situation instead of just seeing them doing homework.”

Solcani said she and her team are least excited about participating in dizzy bats, where the participants eat large quantities of desserts and milk, swing around a bat ten times and run around buildings next to the Engineering Hall. However, she is looking forward to the midweek bar crawl and the end-of-week semiformal. Solcani is particularly excited for the superlatives but is mostly happy for the opportunity to relax and socialize with all the EWEEK participants.

“Everyone’s there. They’re dressed up looking nice and you’ve been doing all these goofy events with them all week and it’s nice to kick back and be like, ‘Ok, remember we’re all friends here’ and just have a good time,” she said.

Shrey Maheshwari, senior in Engineering and second-year EWEEK participant, is a member of the Biomedical Engineering Society.

“I’m not doing it for points or winning EWEEK, you know,” he said. “We’re getting involved in goofy activities after classes and it’s a bunch of my friends and this is the last time we’ll ever get to do that.”

Along with the activities, EWEEK also provides Cheap Lunch, discounted lunches in Engineering Hall from a variety of sponsors every day of the week. Some of the Cheap Lunch sponsors for EWEEK include Maize, Jurassic Grill and Manolo’s.

“I mean, it’s like $1, $2 meals for lunches — which is perfect — so yeah, college doesn’t get better than this if you get $1 lunches,” Maheshwari said. “I would rather have free lunches, but this works too.”

Speaking from experience, Maheshwari said EWEEK can get rowdy and competitive, resulting in good-natured calling out and even catcalling people on other teams while cheering on yours. Maheshwari said it is more exciting than an Illini football game.

“I’m glad that we have this passion and good around this one week of the year, and instead of being engineers, because engineers are stereotyped to be not fun,” he said. “This is our week to be fun.”