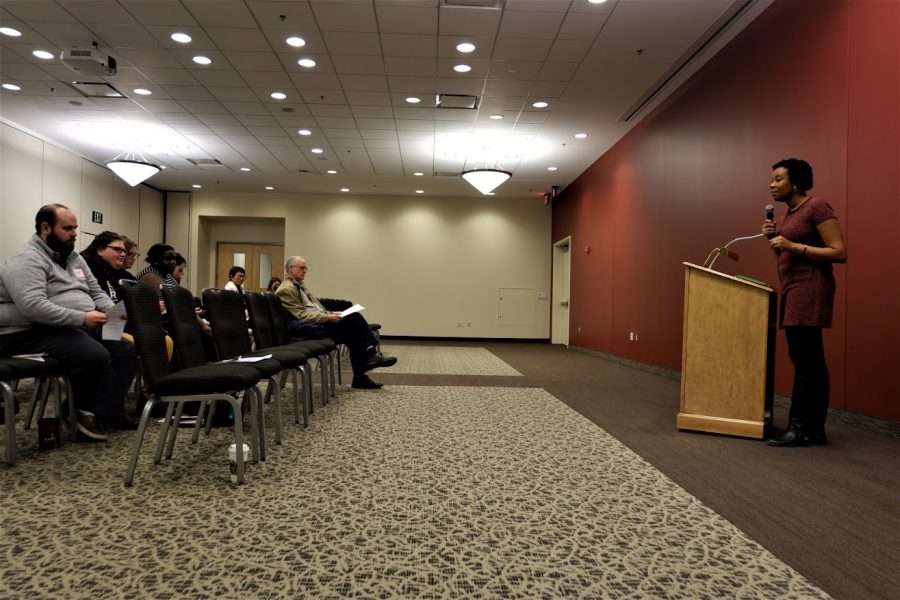 Rev. Jennifer Bailey speaks at the Interfaith Conference at the SDRP on Saturday.

The Illinois Interfaith Conference presented a larger community conversation about faith on campus, and how it can actually be a uniting force.

Muneeb Ansari, senior in LAS and outreach head of MSA, describes the conference as a time for people interested in interfaith work to come and exchange ideas and attend workshops.

Ross Wantland, Director of Diversity & Social Justice Education at the University, is proud of the unique program he helped create.

Wantland believes interfaith relationships are rooted in respecting other beliefs, building relationships and seeking opportunities to work alongside one another.

“Providing space for these (events) helps strengthen the capacity for students to work at a religiously diverse world,” Wantland said.

He mentioned that about 15 students or staff from other campuses will come to the conference, which makes it beyond the University’s borders.

Rabbi Dovid Tiechtel also believes that college is a time to meet people beyond one’s comfort zone. This way, he said, one can have a broader point of view. Tiechtel said experience, lecture and interaction are ways to learn about people.

“It’s not a lecture series,” he said. “It’s very much, you get to sit with people from other universities very active in interfaith communities, and you get to exchange ideas with them.”

He also mentioned talking about issues on other campuses that people had to work through an interfaith perspective and showing us the successes of the interfaith mission thus far.

In other words, this conference also allows for improving dialogues for people across different religions.

The Interfaith Conference allows for sharing different faith approaches to a chosen topic. Ansari gave an example of a past topic, in which individuals from different faith groups explained how food has a value in their faith. He said a Christian student came to discuss the role of the bread and the wine in Christian services, a Jewish student came to discuss the role of Friday Shabbat and a Muslim student explained sharing meals in Ramadan.

This could be seen as a constructive way to approach differences in faiths.

The event also included a conference keynote by Rev. Jennifer Bailey, “Are We Here to Heal? Social Justice, Interfaith Action and Pathways to Redemption.” Bailey is an ordained minister and the Executive Director of the Faith Matters Network.

Free lunch was also provided in the People’s Supper part of the event, highlighting how to overcome stereotypes by interacting with people and sharing a meal with them, in a natural state of getting to know one another.

The conference ended with a performance by the Interfaith dance team.

Wantland mentioned the other interfaith events that happen at the University, such as the First Tuesday Interfaith Dialogue. There will be dialogues on March 5 and April 2 at the Murphy Lounge at the University YMCA. There will also be an Interfaith Potluck on April 30. These events are open to people from every background, whether religious or secular.

“There’s a skill to doing interfaith work,” Ansari said. “You have to establish how you discuss other people’s faith, what you expect out of other people’s knowledge.”