Jaclyn DiGregorio speaks on campus: ‘You are the author of your own story’ 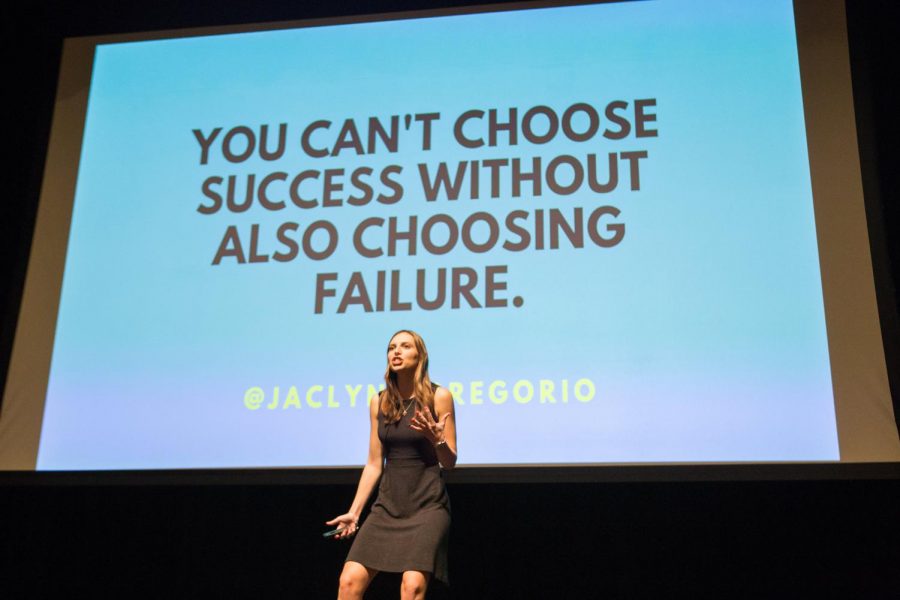 Jaclyn DiGregorio speaking to the members of Panhellenic Council about achieving success through failures at PHC’s first Pride Event of the year on Wednesday.

Wednesday evening, Jaclyn DiGregorio took to the stage in Lincoln Hall Theater as hundreds of undergraduate women waited to hear her speak about how to achieve personal success by overcoming fears and insecurities.

Before graduating from Georgetown University’s McDonough School of Business in 2017, DiGregorio started her first business, CuspIt. It is a wellness brand promoting healthy relationships between women and their bodies. She is now its CEO.

The best-selling author, keynote speaker and entrepreneur has spoken to over 75 colleges, corporations and conferences across the United States to inspire others with her life story.

In honor of National Eating Disorder Week, the University’s Panhellenic Council held its first Pride event with DiGregorio. She shared her experience conquering fears to meet success through personal wellness and acceptance. Struggling with her own eating disorder in college, DiGregorio represents a real-life example of someone who prospered by defeating self-doubt.

Shannon Orowick, vice president of programming for PHC and junior in LAS, planned this event to raise awareness for the week, as well as to encourage women to overcome their insecurities and fulfill their dreams.

DiGregorio said the three biggest insecurities that hold women back the most are the fear of failure, the fear of what other people think and the fear of not being good enough. But, she said, before women can overcome these fears, they must understand what their dreams are.

Conducting an activity with the crowd, DiGregorio had the audience close their eyes to visualize their ideal lives years from now, walking them through a single day in this fantasized life. She formed a full-day scenario, from waking up to falling asleep. She continually asked the audience to dream as far as their imagination could take them.

After receiving smiles and laughter from the crowd upon completion of the dream day, she then told them to close their eyes once more and dream even bigger in their aspirations. When most people responded by imagining a better life, she asked why people do not automatically dream their second dream.

Success, DiGregorio said, is a choice individuals must face every day. They must decide whether or not they choose to use their time to move in a direction toward their dreams. However, by choosing success, one inevitably chooses failure because one does not come without the other.

Starting a business in college did not come without its share of failures before reaching what CuspIt is today. DiGregorio’s original idea began with a plate that helped people eat a balanced meal. But, after investing $10,000 in the venture and marketing the product on every available platform, she realized people were not interested in the plate and favored an app instead.

Writing a book did not come naturally to DiGregorio either. She wrote 20 drafts of her manuscript before publishing. But even after finishing her final draft, the fear of what others would think of her writing made DiGregorio hesitate.

Addressing human nature to care about what others think, DiGregorio looked around the audience and shared that this worry only builds more fear, blocking the goal. Individuals must find the power in themselves to face the insecurities head-on, she said.

“In your life, when you start making choices for you and not for other people, you get closer and closer to achieving that dream,” DiGregorio said. “Confidence and resilience are like muscles, and the more that you build them, the more they grow.”

She said once women can venture outside of their comfort zone, they will truly be able to strive for their dreams without being held back. DiGregorio said she understands the fear of rejection for not being good enough, but if a person never tries to succeed, then they live their life no hope for a better future.

People fear not being good enough because, DiGregorio said, they compare themselves to others. However, everyone is at a different place in their lives regarding their goals, so comparisons are fundamentally flawed. Appreciation becomes key to one’s success.

“Trust that you are where you need to be, follow what brings you joy and remember: If you’re not happy with where you are today, it’s a choice. You see, you are the author of your own story,” DiGregorio said.

Nikki Burdyn, vice president of standards for PHC and junior in LAS, was one of the women who connected with DiGregorio’s optimistic message. Listening to DiGregorio, Burdyn could relate to the same struggles of balancing life while staying motivated, appreciating the model of a true success story she could empathize with.

“You kind of want and need that extra push and that extra motivation to keep you on track and tell you that you should keep going,” Burdyn said. “Everything has two ways of looking at it, and it’s up to you to make that choice about whether you want to look at something in a negative light or a positive light and, if you even do look at it in a negative light, how you can turn that positive, which Jaclyn did.”