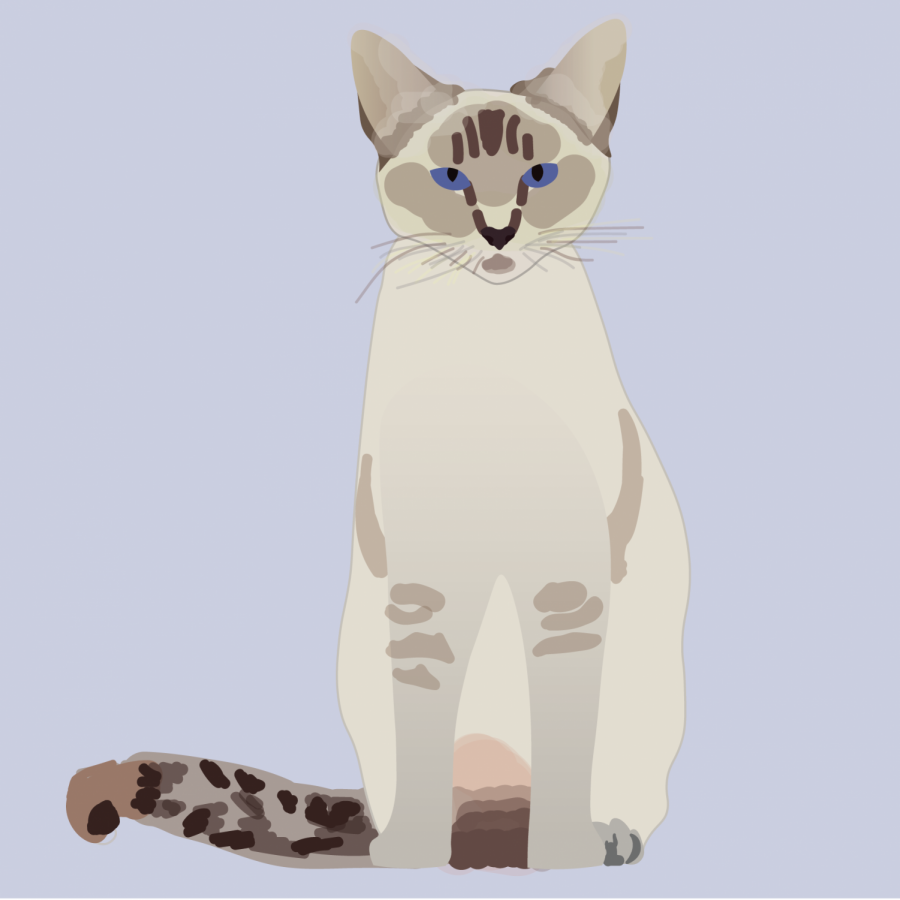 Janet Jarvis entered her regular household cat into the All Breed Cat Show on a whim this year. She said it did not matter her cat was not purebred because many still found her cat beautiful.

The annual All Breed Cat Show had its 27th show at the Garden Hotel this weekend. This year, the event was sponsored by the Illini Cat Club.

Every year, around 165 cats are entered to compete. On Saturday, 145 were present to be judged. Breeders and owners of the cats have to apply to be in the competition. All types of cats are qualified to be entered, including household pets.

“It’s more for me than it is for him. It’s been really fun,” Jarvis said.

The event was set up with rows of cats lined up and four rings where judging occurred. Each ring had a judge, and the judges were surrounded by many cages where owners put their cats.

The judges had their own area where they evaluated each cat, and eventually, they went one-by-one and judged the cats. The judge would pet the fur and often felt the body of the cat while inspecting them. The cats were also tested on how playful they were with a cat toy and with the cat post in the judge’s area.

Judges are very qualified and can be flown in from all across the country just to attend the cat show in Urbana. Spectators can stop by for one of the rounds to hear interesting fun facts about each cat being judged, with information about its breed or about cats in general.

“I have so much fun, and I don’t even need to clean a litter box,” said Jan Rodgers, judge at the cat show.

Volunteers helped clean the cages for judges in between rounds. The environment of the cat show was very clean, and hand sanitizer was crucial for people to use before they touched any of the cats so germs were not passed from any cat to another. Cleanliness was encouraged for all visitors of the event, and some cat owners even asked for a person to clean their hands if they wanted to pet their cat.

Etiquette was important for the cat show, as owners worked hard when presenting their pets. It was important those expectations were respected so the owners, spectators and the cats were comfortable.

The cat show started early in the morning and ended in the middle of the afternoon. During that time, owners waited with their cats to hear their number called on the intercom to alert them it was their time to be judged.

While waiting, spectators who came to the event were allowed to witness the judging or walk around the venue and see the cats participating in the competition for a fee of $5. The cats were either fast asleep, meowing like crazy, playing with neighbors or rubbing against the cages to greet the spectators.

The event hosted a diverse group of cats. The ages ranged from eight months to five years, and sizes ran from tiny to massive. Thirty-five breeds of cats were presented at the show, including Siberian, Siamese, Cornish rex, surreal Persian, Japanese bobtail, Havana Brown, Maine coon and Russian blue.

The main focus of the cat show was to see how the cats rank, but the event also had vendors set up shop and sell cat-related merchandise, from T-shirts to cat toys.

A few cats were also up for adoption, looking for their forever homes. Adoption centers and cat charities attended the event to spread the word that many cats still need to be rescued.

A must-do for many at the cat show was the agility competition. Agility competitions are very common for dogs but have only recently become relevant for cats. Cats can’t typically be trained to follow a course, but many still enjoy watching to see how long it takes for a cat to complete the course.

Robin Bryan, president of the Illini Cat Club, said coming to a cat show is life-changing. Bryan attended her first cat show when she was in third grade.

“When I left, I knew that’s what I wanted to do in life,” she said.

From there, Bryan raised show cats and had two cats who ranked highly on a national level. Bryan’s cats are now retired from competing, but that doesn’t stop her from attending cat shows every year.

Bryan said cat shows have been and will always be a part of her life. Not only does she say cat shows bring her lots of joy, but she said they have also allowed her to make lifelong friends.

The people who participate in these cat shows vary from all ages and walks of life. Many cat owners do not even live in Illinois.

Bryan said the cat show was the best environment.

“Anyone who likes cats should come,” she said.