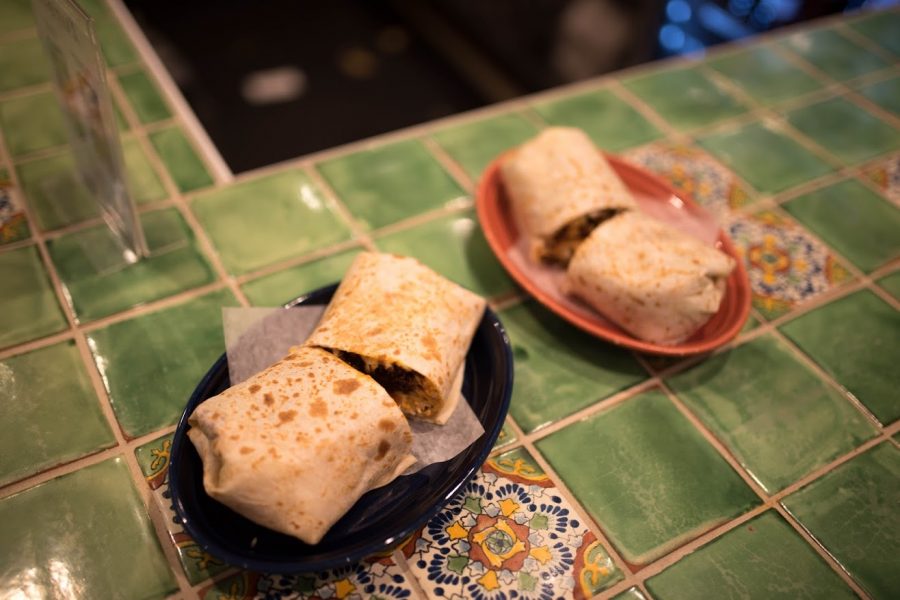 Burritos made by the chefs at Maize Mexican Grill are placed on the counter inside the restaurant on Sunday.

Those who enter Maize are greeted by the ding of a bell above the door, the smell of freshly made nachos and quesadillas and a rush of heat from behind the kitchen doors. Students and locals alike have been frequenting the Champaign restaurant for seven years.

Maize Mexican Grill first opened in October 2011 as a small, crammed diner just on the boundaries of campus. As time passed, Maize expanded and now has two branches — a larger location affectionately called “At the station” located in downtown Champaign near the Illinois Terminal, and the original smaller restaurant at the corner of First and Green streets.

Armando Sandoval, the owner of Maize, said his regular customers began asking him if he changed the original recipes once he opened the larger restaurant, but he didn’t. They simply brought everything from the original location to the new.

“The chaos is the key,” he said. “I’ve never had tacos, even in my own restaurant, as good as the ones that you get on the streets of Mexico, and that’s because you’re missing the people, the air, the place — the whole feeling. When people moved from the little one to the bigger one, there was space for more chaos that came with tons of families, people talking and laughing, the music playing through the speakers, the orders getting mixed up, and from that came the authentic Mexican feeling.”

Sandoval plans to expand his business with a third installment of a food truck featuring his Mexican food. He said he plans to take the food truck to locations outside of Champaign-Urbana and give everyone a taste of what he has to offer.

“Both of them are like my children,” he said. “The bigger one demands more attention, but the smaller one is where I started. It has that small, homely feel, and I feel in control. It’s like being a parent; you’re not supposed to have favorites, but sometimes do.”

Aranza Fernandez has been an employee at Maize for over a year and has worked in both branches.

“The biggest difference is the amount of work,” she said. “I, for one, like keeping busy. When I worked in the bigger one, the process of eating is much more elaborate. But over here, you come in, order and we serve within minutes. It’s concise, productive and fast-paced.”

Fernandez said with the larger location, customers come in, sit down and are brought a menu. In her experience, they pretend they will order something new, but end up ordering the same thing again.

“We’ve had a lot of wild incidents too — drunk college kids and locals come in all the time — so you’re never bored,” she said. “This one time we had a woman come in, eat someone’s leftover chips and tried to leave with the whole tray. When we tried to stop her, she flung the tray across the room and left.”

Yoshio Cardona is a respected chef in both of the branches. Having been with Sandoval since the beginning, he has seen a lot. Cardona preferred to work in the campus location instead of the downtown restaurant for the same reason as Fernandez; faster ordering means more cooking, which he loves.

“It’s crowded here, but it’s also more satisfying,” Cardona said. “I’m much more in touch with everyone here because you have to be. It’s also fun because this one time a drunk girl came in and started flirting with me, she even got me to give her my number!”

Lucero Villegas, on the other hand, has been working at the station restaurant for over year and prefers to work there. She’s been a customer at the smaller location for years, but said although she has always felt very welcome and at home in both places, the bigger one offers her more space, comfort and freedom.

“Mr. Sandoval does a wonderful job running the place too,” Villegas said. “He’s always lighthearted, optimistic and never misses opportunity to make a joke,” she said.

She said sometimes as she takes orders or serves people, she sees him talking to the customers and sometimes even the servers themselves.

“Giving the people the chance to experience authentic Mexican food is all that matters in the end,” Sandoval said. “We use the same ingredients in both of the places, and the same chefs, so maybe it’s the chaos and drama of Mexico that does it for some, or a place to relax and have some quiet is what others want.”