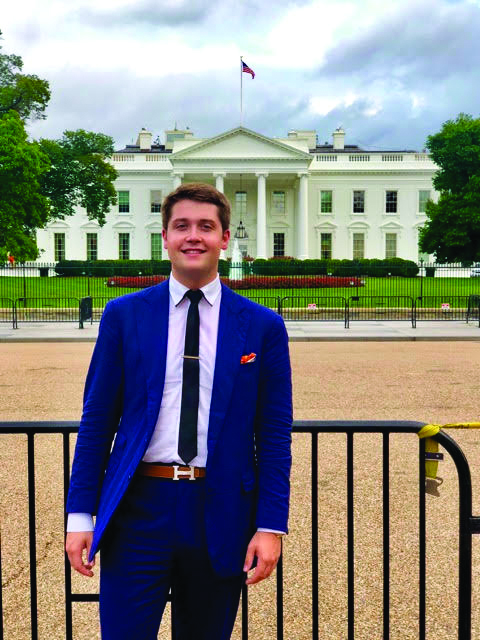 Tommy Justison, senior in ACES, stands in front of the White House, where he interned for the fall semester. The University connects students with a variety of programs which provide experience in the Washington political arena.

Over the summer, Tommy Justison, senior in ACES, thought he would return to the University to complete his degree. That was, until he learned he had been accepted as a White House intern for the fall semester.

As a White House intern, Justison was assigned to work for the National Economic Council, which advises the president on economic policy. Justison specifically worked on agriculture-related policy but also contributed to health care, infrastructure and environmental initiatives.

The road to interning at the White House began with an application and a phone interview back in May, but Justison didn’t hear anything until July.

There were 89 other students part of Justison’s intern class, divided into different departments. Although there is currently a Republican administration, Justison said there was a mixture of political beliefs among the interns.

“No matter if you’re Republican, Democrat or Independent, they looked at everyone pretty equally,” Justison said. “It was interesting to see that aspect because they functioned pretty well as a team. You wouldn’t think that depending on where you stand on things.”

Last August, the White House was criticized for a lack of diversity among its summer interns. However, Justison said the geographical diversity of his intern class was underscored for importance, especially for him given his agricultural background.

“To give those opportunities to students who come from a small town, a rural area or even a bigger city that isn’t as accoladed academically as Ivy Leagues, I think was just as important because you got diversity in that experience,” Justison said. “It provided a rich experience.”

During his time as an intern, Justison met President Donald Trump.

“We did get to individually meet him, and he was in a few different meetings as we went throughout the process,” Justison said. “In all his interactions with interns, he was very cordial and nice.”

For White House interns, dedication to public service is a top priority. Justison said although political polarization is alive in Washington, there are compromises made across party lines.

“You both understand that you’re trying to do something better for the country, and that’s why you’re in public service. You just have different ways to get there,” Justison said. “One thing that I took away that was interesting is there are a lot of these workings that go across lines that you don’t see based on media coverage.”

As the only University student in his intern class, Justison encourages more students to apply.

“No matter your background, political beliefs, this is the people’s house,” he said. “Going to the same places that presidents such as Lincoln, Obama and Reagan did is a truly remarkable experience. To be able to go there every day and be able to see that, it’s hard to believe. Only time you have to really pinch yourself is the last day, when you have to give up your credentials and leave for the last time.”

While interning, Justison took the semester off from the University; however, students can participate in the Illinois in Washington program.

IIW allows students to spend a semester or summer interning in Washington while earning credit through the University.

During the fall and spring terms, the program requires students to take a minimum of 12 credit hours, including PS 491: Internship and PS 125: The Washington Experience. Summer term participants are only required to complete the internship course.

The program is offered through the political science department but is open to all majors. Andrea Mayer, director of IIW, said there are lots of opportunities for Illinois students to intern in the Washington political arena.

“Every member of Congress with whom I work is interested in supporting the University of Illinois and really (wants) to hire Illinois students to be their interns,” Mayer said. “If you want to work on Capitol Hill, there’s a lot of support.”

Mayer also said while 50 percent of IIW participants are political science majors or minors, there are plenty of opportunities for STEM and pre-health students, especially at any of the 400 federal agencies.

Joshua Holmes, graduate assistant for IIW, said this program is a great opportunity for students to test the waters and gain professional experience.

“I know a lot of people that interned in D.C., and it changed their education,” Holmes said. “A lot of them found jobs through it. A lot came back and decided to change the focus of their major, so it’s a really great opportunity for students.”

Justison said he was surprised how different interning in Washington, D.C. was from other corporate internships he has completed.

“Your name and integrity is very much valued in that city,” he said. “A lot of jobs in D.C. are not given because of qualifications, but they’re given because of who you know and who can vouch for you. That was very different for me from corporate. For the most part, your front line is having those qualities that made you successful or having a background that made you successful. But to get your foot in the door is a different story.”