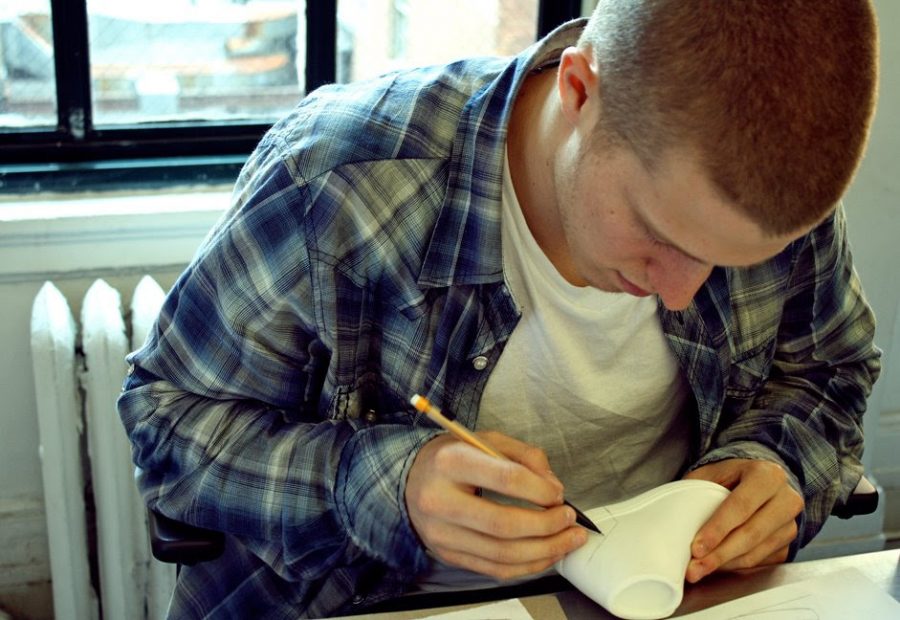 Matthew Walters on campus in an industrial design class. Walters considered opening his own boot company on campus before graduating in 2012 and working as a designer for Under Armour for five years before creating CODDI.

Matthew Walters, University alumnus, created his own lifestyle and hiking boot company, CODDI. The unique name of the company is a shortened version of the English word “coddiwomple,” which means purposely traveling to an unknown destination.

Beginning in the industrial design program at the University, Walters graduated in 2012 and spent five years working at Under Armour as a designer. After a year and a half of creating and designing, Walters became the lead designer for the company’s kid’s department.

While he quickly found success in the corporate world, he wanted to explore the entrepreneurial side of the industry.

He first had the idea to start his own boot company during his design class’ senior thesis.

“Some people did a new toy or furniture,” he said. “For me, instead of doing a new shoe, I created my own company.”

That company became CODDI, a fashionable and high-performance boot brand for both streetwear and hiking. The versatility and aesthetic of the shoes are important features to today’s consumer.

For the past year and a half, Walters has been working on perfecting the process with his team. He’s involved in every aspect of the startup, from designing the boots themselves to pricing, manufacturing and marketing.

Back when CODDI was only a dream, Walters shared his vision for the business with close friends. His friend Scott Kubo helped him realize the financial realities of running a business.

“It came down to sitting down and talking about how much he needed to spend to actually make an impact, and make it realistic for him,” Kubo said.

Once a plan was set in place, Kubo and others saw how Walters channeled all his energy into building the brand and business.

“He truly lives and breathes the brand and makes sure the products he’s making and putting out to (the) market are the best possible product that he can make,” Kubo said.

Still in its early stages, CODDI recently launched its startup page with price points and images of boots. CODDI boots will ship out to customers who preordered them by late July. However, Walters noted there are more important aspects to the business than logistics.

“You can have the best marketing team or the best website or the best manufacturer, but if your idea isn’t there, if you’re not finding a hole in a market, it’s not gonna live,” Walters said.

“I found a free version of Photoshop and took some online courses,” he said. “From there, it went from graphic design to the love of sketching and product design, and then to shoes.”

Pursuing his creative passion, Walters built his design career in stages, each stage building on the next from project to project.

His father, David Walters, saw this take fruition early on.

“He would be given an assignment, ‘make three designs for this project,’ Matthew would come up with 10 designs,” he said.

These interdisciplinary avenues complemented each other well as Walters built his comprehensive designing portfolio. However, leaving a successful and steady career to create his own business left his father worried.

“I was surprised but still excited for him, but I was scared as well for him,” he said. “When you walk away from the corporate world and say you’re going out on your own, that’s a massive step.”

Walters’ experience creating a shoe company for his senior thesis foreshadowed the path he would take in the future. His father could see success coming.

“He hasn’t just had a passion for design, he has a passion for excellence,” he said. “He’s always been very driven, and that carried over to his design career.”

From his entrepreneurial endeavors, Walters has acquired wisdom and experience to share with others who want to follow a design path, especially younger design students.

“Swallow the pill of knowing that you don’t know everything,” he said. “I think a lot of people don’t ask for help or are too afraid to show that weakness. A massive thing I’ve learned is being OK with not being good at something.”