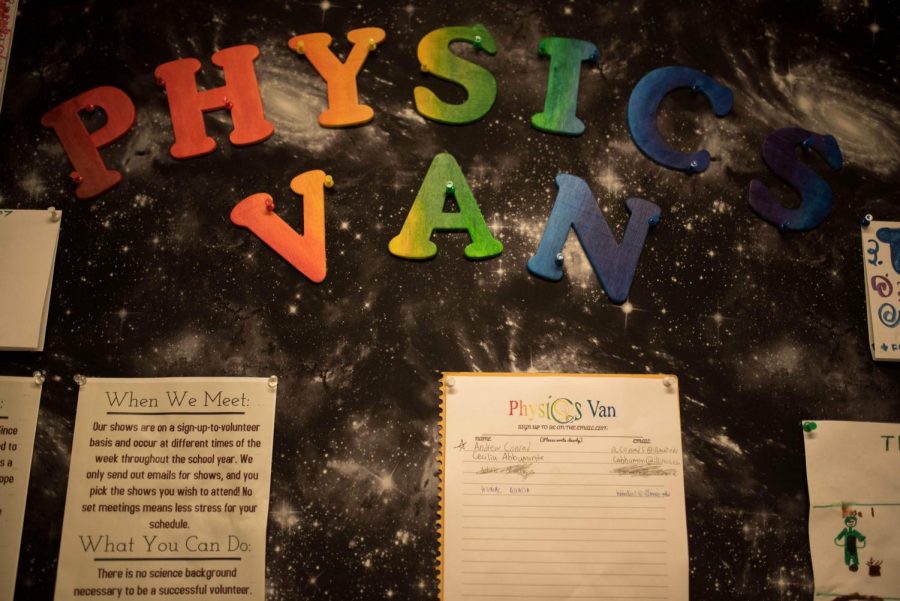 A bulletin board on the second floor of Loomis Laboratory advertises the Physics Van, an outreach program of the UI Department of Physics that promotes learning and curiosity in science. Mats Selen, a physics professor at the University and co-founder of the Physics Van 25 years ago, encourages participation from students of all majors.

Since its beginning in 1994 at the University, the Physics Van has traveled across the United States, teaching young students science through exciting demonstrations and accessible explanations. For the past 25 years, undergraduate volunteers from a variety of majors have delivered over 800 shows to nearly 150,000 young children, reaching as far as New Mexico. Considered the most popular educational outreach in Illinois, the Physics Van and its volunteers continue to engage the next generation.

Mats Selen, professor in Engineering, played a vital role in bringing the Physics Van to life 25 years ago. Selen has also won several awards for his excellence in physics education and research, including the 2015 American Physical Society Excellence in Education Award and Outstanding Doctoral and Research Universities Professor of the Year.

“The idea was to put together a show that lasts around 45 minutes using equipment we can load into a van and things that are loud and messy — the most exciting stuff you can imagine,” Selen said. “Those elements still make up most of the program (today).”

Spencer Hulsey, junior in Engineering, first met Selen as a junior in high school. Hulsey was impressed with Selen’s bowling ball demonstration in his physics lecture to the point where she high-fived him after class. After getting accepted into the physics program at the University, Hulsey was recruited as a student coordinator for the Physics Van.

“(The Physics Van is) to inspire young students aged about 6 to 12 with the possibilities of science,” Hulsey said. “It’s to show them in a memorable fashion of how great science can be. They can and will learn frictions, etc. in the classrooms, but they don’t get to see it in the way we present it anywhere else.”

As an outreach program funded by the University’s physics department as well as donations, the Physics Van delivers its shows for free for all schools who request them. The crew welcomes volunteers from all majors and backgrounds with no public speaking experience necessary. Currently, the program has a mailing list of over 800 people, with 20 to 30 active volunteers; each show requires four to eight volunteers to deliver.

Hulsey’s favorite part of the show is the changing states of matter involving liquid nitrogen explosions.

Will Helgren, another coordinator and senior in Engineering, assists with recruiting new members, communicating with schools, requesting and scheduling shows and driving to shows. He adds one of his favorite parts of the show involves an electrically charged plasma ball where the participant can put his or her hand on to light up an actual light bulb.

“In my opinion, it’s the most compelling part of the show because it’s the least easily explained part to the kids,” he said. “It’s the first moment where the kids have to question the phenomenon because there’s no direct line between what they see and the explanation behind it. This is the kind of thing that first drew me to science.”

According to both of the coordinators, the structure of the show hasn’t changed much since Selen started it, besides a few minor modifications in the explanations, orders and some new jokes.

Helgren said it’s probable the content of the show will remain similar to what it is right now, but he’s looking forward to seeing an expansion on what the Physics Van can provide, such as filming and uploading the demos online to make them accessible to more people and developing a show that is compelling to high school students apart from young children.

“(The) Physics Van fills a very important niche of living in the Midwest, where a large amount of communities around U of I don’t have necessarily have a large amount of funding or have access to scientific classes or instructors, where a lot of kids don’t get exposed to STEM at all,” Helgren said. “(The) Physics Van provides an opportunity to the students and instructors where they might not have it in the first place.”

Besides the show’s popularity with young children, the most valuable aspect of the Physics Van for Selen is its ability to bring students of all majors together, without whose efforts the Physics Van wouldn’t be where it is today.

“The students are the reason (Physics Van) kept on for 25 years. They’re not all in physics. In the past, we’ve had student coordinators who majored in medicine, architecture and classics. So all the credit goes to students and their enthusiasm,” Selen said. “What I didn’t realize would happen which I’m so glad for is over the years hundreds of Physics Van student volunteers have gone into the shows, and it had an amazing impact on the students. It changed the whole way of interacting with science and with the public, and it has made them really interesting wonderful grown-ups.”