The Other Guys celebrate 50 years 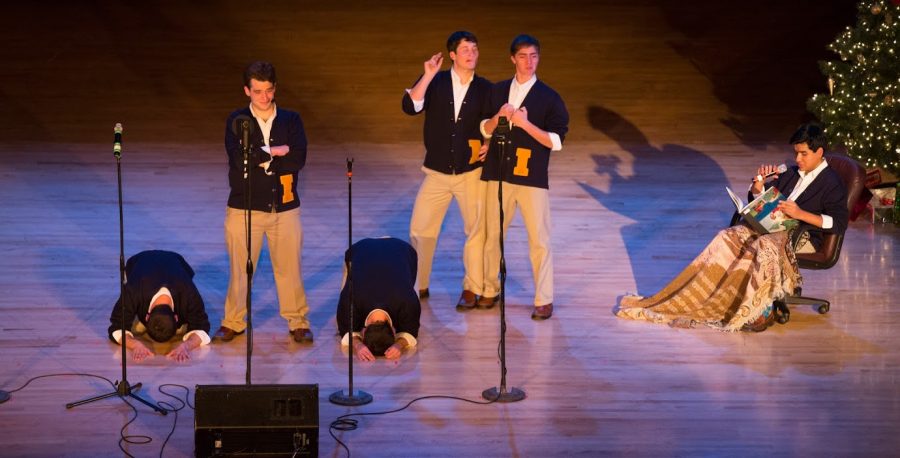 iThe Other Guys perform “‘Twas the Night Before Plots” at their Annual Holiday Concert at Foellinger Auditorium on Saturday, Dec. 1, 2012.

It was the intermission of the 1968-1969 Varsity Men’s Glee Club concert. The director walked onto the stage to introduce a new group performing for the first time.

“Well, guys, you just heard the University of Illinois Varsity Men’s Glee Club,” he said into the microphone. “And now for the … ” He paused for a moment; the next group didn’t have a name yet.

“The Other Guys,” he finished.

The Other Guys were born on that night 50 years ago, and they have been growing in popularity and size ever since.

Simon Tiffin, senior in LAS, is currently a member of the group.

“Growing up, I was never a singer,” Tiffin said. “The first time I ever sang was senior year in high school. When I came to the University of Illinois, I realized that The Other Guys was something I was born for because the two things I love the most are singing and laughing, and it was perfectly balanced between both.”

Tiffin said Bruce Johnson, a master’s student in the 1968-1969 school year, was a member of the Varsity Men’s Glee Club when he wrote their famous song about the Morrow Plots. He and a few of his classmates who were in glee club loved choir but wanted to have a smaller group. They got together and formed The Other Guys.

Tiffin’s role has changed in the group, going from just one of the performers on stage to being someone who arranges the music for the performances. He said it has been a huge journey for him to undertake.

“As I got further into the group and gained responsibility, taking on the mantle of music director seemed like such a big task,” Tiffin said. “But now that I’m comfortable with it, I can explore and experiment.”

Nicolas Ahlgrim, sophomore in LAS and another member of the group, said one thing special about The Other Guys was their bond.

“The brotherhood always seemed so close, and I’ve always wanted to be a part of something like that,” Ahlgrim said. “Music making as a group can do that; it can really bring you closer to people. It wasn’t like it was a fraternity, but it was fraternal — you could just see that they were just so close and just shared this close bond.”

Ahlgrim said being part of The Other Guys was also very eye-opening. He loved how the group was sink-or-swim-oriented. The older members of the group would often steal his previously scripted jokes on stage, and he would be forced to come up with new ones impromptu. He found it very intellectually stimulating and a fun way to keep them on their feet.

“You either do the right thing and get some laughs or do the wrong thing and get laughed at by the group,” Ahlgrim said. “Either way, it was a rough adjustment, but it makes you step up quickly.”

Even though every year Tiffin sees a class of The Other Guys graduate and leave, he said he still feels connected to them. He said  considering the connections he now has on Broadway and at the Pittsburgh Symphony Orchestra, he felt like he is part of one giant legacy of The Other Guys.

Omari Moss, freshman in LAS, is one of the group’s newest members, joining The Other Guys just last fall. He said he feels the current group has changed a lot of the traditions of the group.

“I’ve only known the past due to older guys’ experiences and stories that were passed down from older guys, but it’s really interesting how crazy this group has changed,” Moss said.

With the 50th year anniversary celebration drawing closer, Moss said he knew the alumni coming to campus for the celebrations would love it — not just for the sake of being with their old groups but to see how far the group has evolved. He said a lot of the alumni still kept  in touch with them and hung out with them after their performances.

“It’s really like one huge family to us.  I believe they will still be happy with this group because ultimately, the same core values have always remained in the group. We’re all just guys that love making music with each other,” Moss said.

He said the initiation night was the best day of his life. He didn’t know how else to describe the fun and excitement everyone showed that night.

“We were all new faces, but the bonds and family ties were all formed that night,” Moss said. “I had no doubt upon meeting them for the first time as an Other Guy that this was the place where I belonged.”