“Because I Am Your Queen” showcases feminism on, off stage 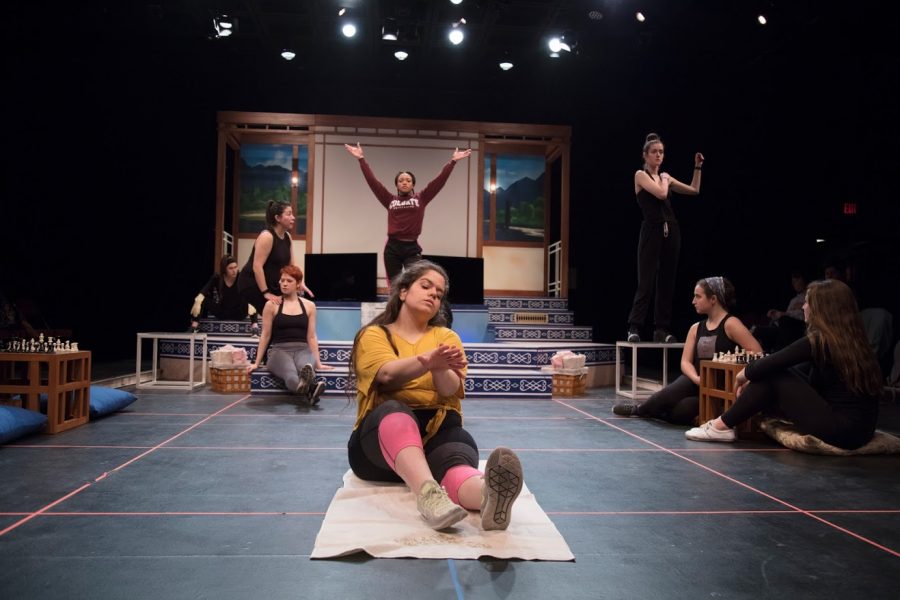 Students rehearse for "Because I Am Your Queen" (a feminist fantasia) at the Illinois Theatre on March 13. The all-female cast enjoys the historic and empowering show.

Dr. Kirsten Pullen became the first female head of the theater department in 2017. As a result, she has helped bring the all-female show “Because I am Your Queen (a feminist fantasia)” to the Krannert Center for Performing Arts, debuting March 28.

Erica Hernandez, cast member and graduate student in FAA, also attended the University for her undergraduate degree and credits Pullen with the department putting on the female-empowered play.

“Dr. Pullen was open to receiving suggestions,” Hernandez said. “Things like that didn’t happen. I just didn’t really know that was even on the radar when I was here the first time around.”

Director Barbara Pitts McAdams said Pullen’s selection was a “good judgment call” and gave “a bunch of students and some faculty designers the chance to collaborate in a way that the machine of Krannert Center often does not support.”

Mina Samuels, the playwright of the show, had previously been a lawyer. Through the Tectonic Theatre Project, a theater company based in New York, Samuels found herself enlightened by the experiences the stories were able to facilitate.

“There was something that was so holistic about it as a way of creating theater, everybody being involved, not starting in one particular place,” she said.

Samuels also met McAdams through the Tectonic Theatre Project. They were unified by their desire to create something “holistic,” the prerequisite for “Because I Am Your Queen.”

The plot of the play attempts to steer away from the common archetype of one hero’s journey, Samuels said, aiming to work “on the idea of a cyclical nature of change … collaborative ways of changing.”

The show reevaluates the narratives of different queens throughout history after a group of female astrophysicists conduct a “thought experiment,” bringing the queens together.

“The idea is all of them become conscious of certain things in their narratives that have held them back,” McAdams said.

The show takes place at a Korean spa, Samuels said, because “everybody mistakes a cosmologist with a cosmetologist.” The astrophysicists are disguised as spa attendants. Zoe Replinger, cast member and sophomore in FAA and Media, describes the setting as a “mathematical imaginarium.”

Devised plays, like “Because I Am Your Queen,” fosters collaboration between faculty and cast instead of a pre-written or pre-performed play.

“It’s a fusion of everything,” said Larissa Almanza, graduate student in FAA and costume designer for the show. “Historical elements in their costumes and then also modern day. Nobody ever told me ‘no’, everybody just kept saying yes.”

Sound designer Brandon Reed, graduate student in FAA, found the creative collaboration refreshing, saying “actually being able to be in the room and respond to what (the actors) were doing was really nice for a change. You don’t always get to do that often.”

Replinger found being part of the script’s evolution to be exciting.

“The coolest part of working in a new play is being a part of those changes,” she said. “This is the beginning of theater evolving.”

Replinger also stressed the need for more exposure for female leads in plays. Replinger’s co-star, Hernandez, was moved to be working with so many women on the project.

“To be in a room full of women, all-female cast, all-female production, it just inspired me,” she said. “I wish (my character) can see this play. It has been such a gift.”

As a result, Hernandez has found this rehearsal process to be “more inclusive.”

“Because I Am Your Queen” is the collaborative product of various cast and crew members, many of them female. McAdams acknowledges how the representation of the cast alone is historic.

“It’s already a radical act to have 10 female identified actors on stage. That in it of itself is already feminist,” said McAdams.

The performance attempts to enact such powerful conversations, which were initially explored by playwright Samuels.

“What if Elizabeth didn’t cut Mary’s head off?” she asked. “What if they collaborated and brought kingdoms together?”