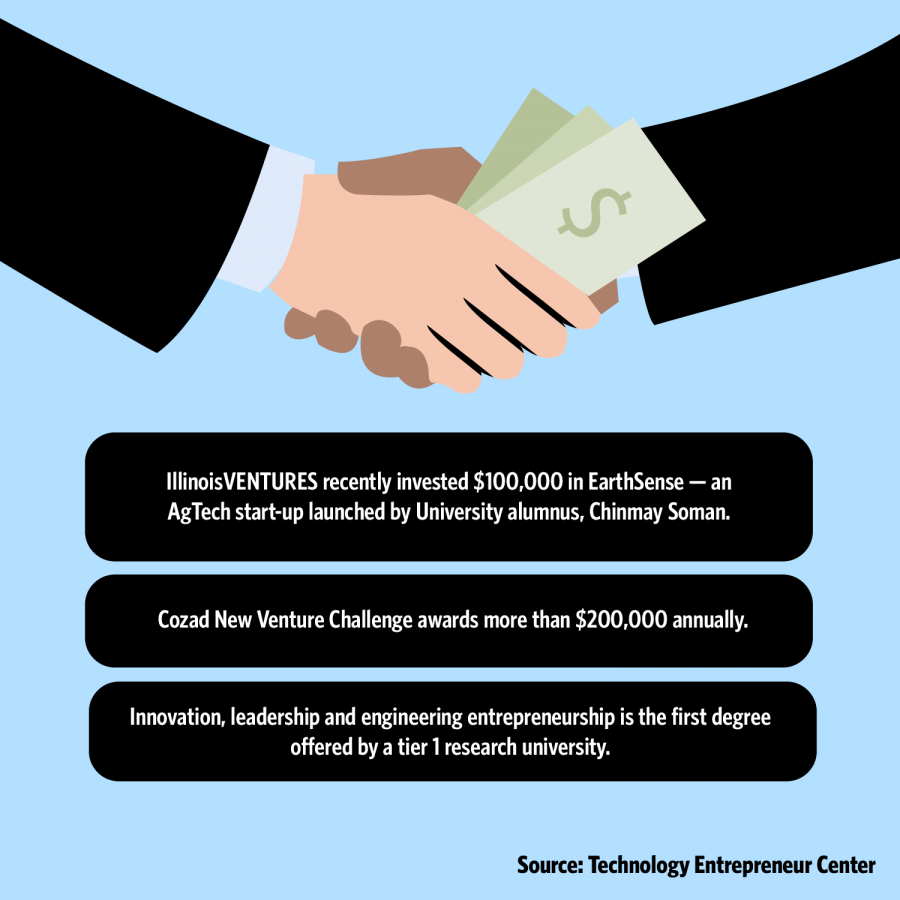 Tom Parkinson was looking for an opportunity to work with tech-based startups in a research university setting. He found IllinoisVENTURES and became the senior director of the program.

IllinoisVENTURES  is a capital firm devoted to assisting entrepreneurs, including faculty, students and alumni from the three campuses of the University of Illinois System.

“We provide startup and early-stage venture capital funding for tech-based companies that are affiliated with the University — faculty, students and alumni,” Parkinson said. “We also work with entrepreneurs to help them understand the venture capital process and how best to raise money for their ventures.”

Previously, Parkinson taught courses on entrepreneurship and entrepreneurial finance at several universities. He also ran a seed capital fund at Northwestern University during the late 1980s.

At IllinoisVENTURES, startups need to meet two requirements to be considered for investment.

A wide variety of startups are supported.

Parkinson said sometimes the startups are based around inventions created by faculty. Other times, the startups are led by undergraduate or graduate students involved with the Cozad New Venture Challenge, the iVenture Accelerator or another program on campus.

There is also a venture fund in place which can invest in companies led by alumni who can be located anywhere in the U.S.

Daniel Gambrell, an associate of IllinoisVENTURES, said the companies receiving investment and assistance are in the very early-stage businesses typically trying to build their first product and launch.

Parkinson said they are looking for the same things most early-stage investors look for.

Parkinson said some of those key points are “a great idea, a large and growing market opportunity and at least the beginnings of a strong management team.”

Soman said he was always aware of the IllinoisVENTURES program, which has been involved with EarthSense since its launch in summer 2016. IllinoisVENTURES helped Soman and the EarthSense team find out more about how their technology fits in with the marketplace.

“Not all venture capitalist firms are comfortable working with entrepreneurs based out of universities,” Soman said.

IllinoisVENTURES has maintained a mentoring relationship with EarthSense. The startup has been communicating constantly, and it actively receives advice regarding commercializing  its agriculture technology.

EarthSense and IllinoisVENTURES are both located at Research Park, which makes communication an easy affair.

Soman said the IllinoisVENTURES  team  is accessible and approachable. He also said its advice and collaborative nature is a unique strength compared to other venture capitalist firms.

“Instead of just handing us a certain amount of money and being done with it,IllinoisVENTURES  provides constant aid, discusses with us the challenges that lie ahead and helps in building connections in the business sector,” Soman said.

The IllinoisVENTURES team helps aspiring student entrepreneurs fulfill their dreams by acting as a catalyst in introducing and finding a place for their developed technology in the market.

“This University is filled with very smart people who want to make the world a better place in some way while having fun and making money in the process,” Parkinson said. “We’re part of the University, so we have a chance to learn about opportunities very early on and have an impact before the company is at the stage where it’s raising tens of millions of dollars from Silicon Valley venture funds.”

Parkinson said students generally know a lot about being students and come up with startup ideas for products that only appeal to college-age students. He warns if they can’t find a bigger market to work in, they will have difficulty getting traction.

Parkinson recommends learning about entrepreneurship while attending the University, even if students do not have any immediate plans to start a company.

“You might have a great idea for a startup 10 years from now, and you’ll be glad that you learned about the process when you did,” he said.